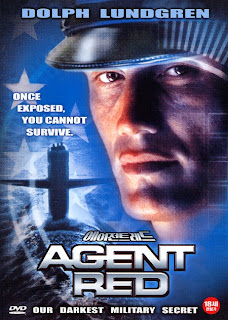 Directed by: Damian Lee (and an uncredited Jim Wynorski)

Apparently there’s a deadly “bio-weapon” out there called Agent Red which, if released to the public, would kill many people horribly. Captain Matt Hendricks (Dolph) is assigned to go aboard a submarine and pick it up, to deliver it back to the U.S. Government. Helping him out is potential love interest Dr. Linda Christian (Paul). When the sub is hijacked by some evil Russians who want the Agent Red, Hendricks and Linda must fight them and get the Agent Red back safely. What will happen, and will anyone care?

Agent Red should be shown in film schools as a perfect example of how NOT to make a movie. All this supposed “movie” consists of is a disjointed mishmash of stock footage from a bunch of different sources. Playing “spot the stock footage” isn’t really the same thing as enjoying a movie. It’s just insulting to audiences. It assumes they are just idiots who don’t know anything. Working off of this absurd premise, Damian Lee once again proves he’s a hack, and Jim Wynorski had to come in and reshoot much of the footage. Again, not a great sign. 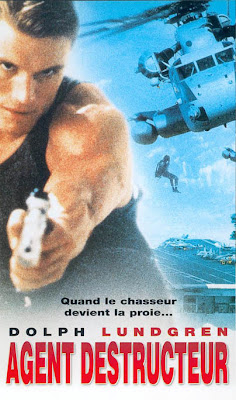 As if suffering through yet another junky submarine slog wasn’t enough, this movie is talky, yet without any character development. It’s the worst of all worlds. It’s impossible to care about the proceedings. Even Dolph can’t save this trainwreck (sub-wreck?) of a movie. Really the only people that would be watching this are Dolph fans to begin with, and this is just a slap in their faces. Most of this isn’t really Dolph’s fault. It’s Lee and producer Andrew Stevens. What were they thinking? Did they honestly believe anyone in the world would actually like this crud?

There’s not even really any action to speak of, maybe a few brief fights, shootings, and some stock-footage explosions. This barely qualifies. But it does have every cliche imaginable, including the “wacky taxi driver”, naturally named Ziggy  (Allan Kolman). Is this movie Counter Measures (1999)? Is it Storm Catcher (1999)? Who can tell? Even though Dolph’s name here is Hendricks, in the stock footage “he” wears a suit with the name tag “Holloway”. Did no one notice this during (what passed for) the editing process? 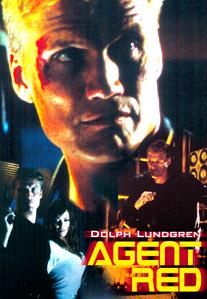 Agent Red is what happens when footage is cobbled together, and a presumed movie is assembled, but without any surprises or intelligence. The presence of Dolph prevents this from being a zero star movie, but in all other aspects, it really is.

Assembling footage is not the same thing as making a movie, which the horrendousness of Agent Red amply proves.

Lol your welcome! We try to help!

Eh, this was still better then Jill Ripps and Final Inquiry, plus that scientist chick was pretty hot.

You have to admit, it is not Dolph at his best.

Yeah i'll freely admit it's far from his best, but it's not the worst either.

I can't argue with you on how bad this is... but I really enjoyed it. My friends and I were laughing the whole time. My favorite was when they stole from Storm Catcher at the beginning, and the footage they used was of a guy who's like a foot shorter than Dolph.

Venom: Agreed, we think Detention is worse than Agent Red.

DTVC: That was very ridiculous how they stole the Storm Catcher footage without any effort in trying to hide it!

Wow, you relaly think Detention is worse? I thought you'd like that one since at least it dosen't depend so much on stock footage.

They are both pretty poor, but Detention is just a little worse for being just a tired and annoying Die Hard re-tread.

It's pretty good if you compare it to something like say Hostile Takedown, which is one of the cheapest and most awful Die-Hard rip-offs ever made(only The Vault is worse) it takes place in a shopping mall, only it's not fun like Point Blank, it's just incredibly tedious and painful to sit through, and don't even get me started on the acting, it's terrible even by Maverick film standards.

I have heard of Hostile Takedown and read that it is atrocious. Most Maverick product is crud.

Personally it never really insults my intelligence when Jim, Olen Ray and Stevens' other minions reuse the same stock flying or submarine footage.

It's really only when they take something that's a well-known blockbuster (See CRITICAL MASS where they steal a good hour's worth from Terminator 2) that it becomes tiresome.