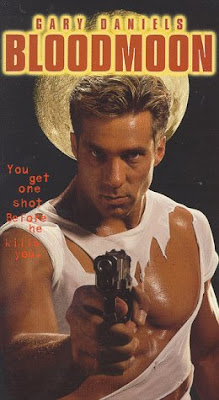 In New York City, a serial killer with a very silly costume (Shahlavi) is going around beating up/killing all the meatheads in town. Chief Hutchins (Gorshin) assigns police detective Chuck Baker (Jeffreys) to the case. Aside from being an avid martial artist and cop, Baker also enjoys magic tricks. But when the man known only as “the killer” ramps up his evil doings by taunting the NYPD via his mastery of the newly-formed “internet”, a serial killer expert, Ken O’Hara (Daniels) is brought in to assist Baker.
O’Hara is a good-natured divorced man with a young daughter, Lauren (Jones). Of course, he is also a highly skilled martial artist. When it is discovered that The Killer has murdered O’Hara’s beloved, elderly, mustachioed Kendo instructor, and is now after his cousin Kelly (Rocci), O’Hara finally gets angry and wants revenge. Naturally, at first O’Hara and Baker don’t get along, but they must team up to stop the mysterious killer with the detachable metal fingers. 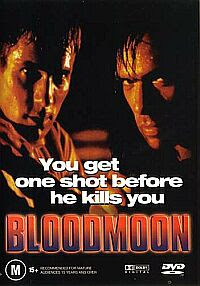 Bloodmoon is a very entertaining movie, and has a pretty insane, off-kilter vibe. Sure, it’s a bit overlong at 100-plus minutes, and some of the more repetitive aspects of the movie could have been trimmed, but the excellent fights make up for any other minor flaws. It’s all Hong-Kong style fast-paced, creative moves meant to please fans of this genre.
No doubt this was due to the fact that this is a Seasonal Films production directed by  Kuang Hsiung, who recently served as one of the action directors for Ip Man (2008). And the writer, Keith Strandberg, is responsible for penning the No Retreat, No Surrender (1986) and American Shaolin (1991) series. So that should give you some idea of what to expect here.

Chuck Jeffreys has charisma and humor coming out of every pore of his body, and even his magic tricks come complete with wacky sound effects. His resemblance to Eddie Murphy/Robert Townsend is uncanny.

Gary Daniels is, as always, extremely likable as the “mind hunter”, or profiler. He really gives Richard Norton a run for his money in the “white guy with an accent who is an excellent martial artist but is also very personable and likable” department. The legendary Frank Gorshin is awesome as the stereotypical angry chief. It was nice to see him, especially in a role like that.
Let’s not forget Jeffrey Pillars as the classic computer geek Justice, and there’s even an early appearance from wrestler Rob Van Dam. Brandie Rocci is nice as the spunky Kelly in a role that will remind you of Cynthia Rothrock. Shahlavi as the baddie, complete with metal shoes that make for painful kicking, was a cross between impressive martial arts and out-and-out silliness. Kind of like the movie itself, really. 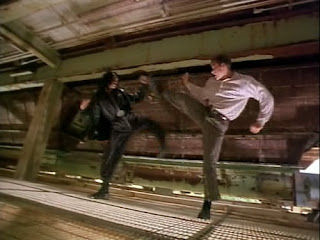 Add to that the nostalgic 90’s computers (and surely some of the earliest references to the Internet, GPS, and texting ever seen on film - movies like this never get credit for being ahead of their time) and you have a rollicking good time.

Great quality fights and many funny moments are the name of the game for Bloodmoon.

I love it when a film like this exceeds expectations and ends up being enjoyable, especially with the fight sequences. You don't know (or maybe you do) how many times a crappy fight sequence ruins a film that otherwise would have been badass from the DTV market. Awesome review, I'll have to make it a point to check this one out.

Thanks for the compliment. Can't agree more with your comment. Daniels usually delivers the goods and Bloodmoon is quality Daniels. Definitely let us know when you watch it.

I got this as one of Daniels's best, I loved it. Plus Jeffreys and Shahlavi get the due they deserve in bigger roles compared to what we usually see them in. I'm glad you dug this one too.

We agree once again that Jeffreys and Shahlavi deserve more time in the spotlight.

Do you have the "lenticular" VHS cover where Gary Daniels "morphs" from one side to the other?

Saw this last night with some friends. Easily a four star and up there with Superfights. Everyone had a blast. Highly recommended.