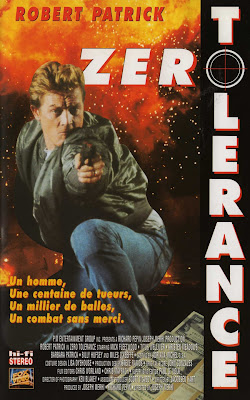 
PM knows action, and by this point in their history they had refined their craft to such a point that they  turned it into an art. Case in point: Zero Tolerance. This movie is awesome. It delivers the goods in every possible way.

Jeff Douglas (Patrick) is a by-the-book FBI agent and family man. On what he thinks will be just a routine assignment, he must go down to Mexico and pick up Manta (Welliver), an evil, but charismatic killer and drug dealer. He is a member of the White Hand, a sinister underworld organization intent on putting a new form of liquid heroin on the streets. Things don’t go exactly as planned, and Manta escapes. Now back with his criminal associates Vitch (Fleetwood), Kowalski (O’Keeffe), LaFleur (Anderson-Gunter), and others, he commits an act that is so horrendous against Jeff Douglas, Jeff must go rogue and systematically kill all the baddies. His FBI counterparts don’t approve of his reckless ways, but Jeff doesn’t care. He’s traveling around the country on a no-holds-barred revenge mission, and for the people that wronged him, he has ZERO TOLERANCE. 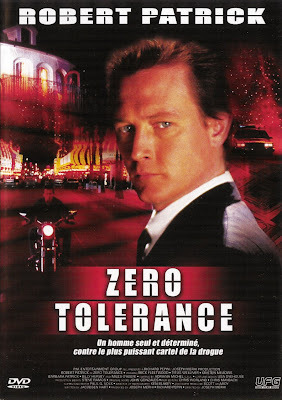 Robert Patrick as the hero, Jeff Douglas, was an excellent choice. Zero Tolerance has way more emotion than a normal film of this type, and Patrick is just the man to carry it off. That’s something that makes this movie special. You can see Douglas slowly losing patience with life, and being stripped of everything he has. With his emotions flooding, we see he has nothing left to lose, and he takes out his grief and pain, as well as anger, on his aggressors. Another interesting casting choice was Mick Fleetwood as one of the top bad guys. It seems the filmmakers wanted to go with Donald Pleasance, but seeing as how the drummer for Fleetwood Mac is evil in real life, the casting decision was a no-brainer. O’Keeffe puts in one of his best roles also, as the conflicted baddie with the Matt Hannon-like hair.

Titus Welliver is also noteworthy as the sinister, purple suited Manta. He’s actually not the only one in the movie that wears a purple suit. He even has a multi-screen videoconferencing system with his fellow evildoers which can only be described as GoToDrugDeal (patent pending). This was way before Skype and a lot of other technology. As we discussed in the Bloodmoon (1997) review, direct to video action movies oftentimes are ahead of the curve technology-wise, but no one gives them credit because no one ever talks about them. 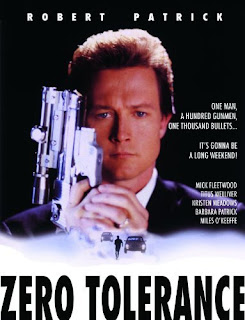 But the bottom line is, this is a mega-entertaining, fast-paced gem that delivers the goods times ten. It’s the best kind of revenge movie. It has a well-written plot, a likable hero, a hate-able villain, and action and stunts galore, but it actually has underpinnings of emotion and depth. What more could you want?

Zero Tolerance gets our most enthusiastic recommendation. See it today!

Dude, I'm all over this. I gotta check it out ASAP!
And when I saw Fleetwoods name on the credits at the beginning of your review, I was like "Huh??". lol. Interesting casting choice for sure.
Great review guys!

Thanks! It was very odd to see him. It was like seeing Wayne Newton in an villainous role in Best Of The Best 2!

Yeah, I love revenge action/thrillers and this is one of my favorites along with Running Scared and Death Wish 3, it's also one of PM's best films.

Ive seen this back in the 90s when it came out...I can only agree with your review.

Venom: Totally agree. PM made some quality action flicks. Wished they were still around.

Hellford667: Cool. Happy you agree. Robert Patrick was at his best.

And let us not forget that Mick Fleetwood basically played himself in The Running Man too.

Never heard of this but it sounds awesome. I've got to see it!

We are happy and surprised that Mick Fleetwood is garnering so much attention. It's what makes finding movies like this so worthwhile!

Good review, Robert Patrick is the man! He should have been and still should be in more mainstream films.

Can't agree more, Robert! Patrick is always entertaining. Thanks for your comment.

Yeah, Patrick was really entertaining in The Marine.

Heard he was! Will have to check that out.

This was my first PM joint, and I have nothing but fond memories of it. It stills holds up after all these years too. Great review!

Thanks! What a great way to start off your PM experience!

I did this one over three years ago, and really enjoyed it too. I would have liked to have seen more Patrick and O'Keeffe on screen together though-- it was like the Godfather 2, where two great actors never share the same scene.

We totally agree, but that is the only flaw in this otherwise great movie.

It's amazing to me how people give the likes of Liam Neeson and Denzel Washington all the credit for inspiring all these older guys seeking revenge when Robert Patrick was doing it years before them (granted he was still way younger but still).

Can't agree more. Patrick was killing baddies in the 90s. Hope he does another revenge movie soon.

I hope so too! He's been stealing the show on the From Dusk Till Dawn TV show and was a highlight on THE UNIT and but so far he hasn't had many Action movie highlights. GOOD DAY FOR IT was an interesting drama-thriller but that's not exactly the tough guy modus operandi we're picturing.

He was wasted in Flags of Our Fathers and couldn't even rescue the first The Marine and I heard from you guys that MAFIA was lousy by even the lowest DTV Action film expectations so he's totally due for some comeback in any fashion.

If the indie or DTV crowd won't give us another one-man army film for Patrick and since he won't return to Terminator so as to keep the great spirit of T2 alive and well, then maybe they can get him a recurring role on THE LAST SHIP or the next installment of 24?

Definitely want to check out the from dusk till dawn show. Wish we had The El Rey channel. Would love to see Patrick on a new 24 type show. That would be awesome.

The ''From Dusk Till Dawn'' TV show now has the first season available on DVD (don't know about Blu Ray but I'm sure it's available).

Yeah, the closest Patrick got to being in ''24'' type material was co-starring in 2006's FIREWALL which was basically a mash-up of RANSOM, SWORDFISH, DIE HARD and DESPERATE HOURS with Harrison Ford in AIR FORCE ONE/PATRIOT GAMES mode and Mary Lynn Rajskub channeling her Chloe character from "24."

Wish he was the villain in Firewall instead of that other guy!

He was in SWAT 2 playing a SPEED/TICKER type villain but so far nothing that would make Alan Rickman blush in comparison.