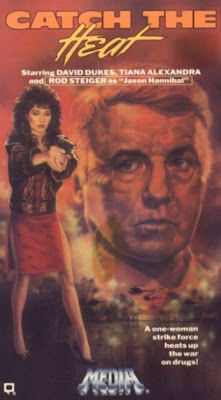 Checkers Goldberg (Alexandra), who apparently is the original Whoopi Goldberg, is a San Francisco-based federal agent. Her beauty and charm have led her into dangerous undercover work, such as dealing with drug-dealing scumbags like Danny Boy (Thompson). But she gets her biggest undercover job to date when she and partner Waldo Tarr (Dukes, who apparently is the original David Duke) must go to Argentina to stop big-time drug lord/talent scout Jason Hannibal (Steiger) and his army of goons such as Dozu (Tanaka). Evidently crucial to this crimefighting process is Goldberg’s transformation into Cinderella Pu, a stereotype-Chinese character with a thick accent. Will Waldo and Checkers be able to bring down their criminal empire...and fall in love in the process? Yes...WALDO and CHECKERS.


This movie is very, very dumb, not to mention stupid. It’s directed by Joel Silberg, the director of the first Breakin’ (1984). All we can say is...stick with Breakin’. Like Breakin’, this movie does feature some noteworthy music on the soundtrack (such as theme song “Captive in the Heat”... not Catch the, but Captive in, for those keeping score at home) and cool 80’s fashions. But the Martial Arts is pretty watered down and the humor is lame. This is surprising considering the movie was written by famous, lauded writer Stirling Silliphant.


Alexandra is nice to look at, but she’s no female Sho Kosugi, as this movie seems to be grooming her to be. Her line readings are so bad they’re funny, but maybe it’s supposed to be that way. Rod Steiger is on hand for some reason as the main baddie. It’s a total paycheck role for this normally fine actor. They don’t make him do anything too strenuous for fear that his wig might fly off.

While this movie isn’t totally without its merits, and has a nice cast, including fan-favorite Brian Thompson in a small role - yes, Yahoots Magoondi himself - and the always-lovable Professor Toru Tanaka - Catch the Heat (whatever that means) shouldn’t exactly be a priority for your collection.
Comeuppance Review by: Brett and Ty

I thought this film was pretty good actually and I liked Alexandra in the lead role, too bad she didn't star in more films like this.

She could have been a female Sho Kosugi!

this showed up on netflix instant last week, i added it immediately. though sounds like the plot summary is more interesting than the actual movie.

You're absolutely right. The plot summary is better. But the movie has a couple decent moments...but mostly it is pretty slow-going.

I loved the movie Tiana Alexandra l loved her as Cinderella Pu I love her kicking that door down so if people hate the movie I got 2 words for you FUCK OFF!!

You feel really strongly about the movie!

The performance of Tiana Alexandra as the undercover character "Cinderella Pu" takes cringe to a whole new level. The ridiculous accent and referring to herself as "Cinderella" in third person is just too awful for words.