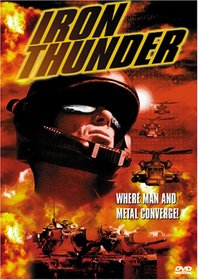 
We get no pleasure out of saying this...for those new to this site, we’re not those snarky internet guttersnipes that just nitpick movies (mainly because they’re just nerds who don’t know anything; we’re just regular people)...but Iron Thunder is the worst movie we’ve reviewed to date. All copies of this cinematic abortion should be eradicated from the earth.

The really sad part is, it never has to be this way. Like other potential renters, we presume, we thought “Oh, Iron Thunder. That’s a cool title, even though there’s already a movie by that name starring Anthony “Amp” Elmore, and it stars Richard Hatch. It can’t be all bad”. Well, it IS all bad, because it has nothing viewers look for when they watch movies: likable characters, an interesting story, and an enjoyability factor that rises above zero.

Apparently Richard Hatch plays a guy with a plug in his head (not to be confused with “Plughead” from the Circuitry Man series) who goes rogue with a new experimental tank and a team of soldiers has to go find him and avoid being killed by him. The rock-bottom budget gives all the proceedings a junky look, from the horrible CD-ROM-style graphics to the toy tanks they used as laughable miniatures. Other effects are just annoying and headache-inducing. This utter slog is sub-crud and there’s a lot of talkiness you just don’t care about and are not even close to being invested in. And the kicker is, this crime against movies goes on for a punishing, brutal, inexplicable, inexcusable 110 minutes! Why? What were they thinking?

Try to imagine a STUPIDER Digital Man (1995) crossed with a MUCH stupider Bulletproof (1988), add a few more layers of worthlessness, draw it out for almost two full hours and then you might have some clue as to how unbelievably bad this movie is. It truly gives low-budget and Direct-To-Video filmmaking a bad name and insults them besides. This movie is a traitor to the cause of awesome DTV action-packed fun.

Don’t they teach warnings against this sort of thing in film school? Apparently this director wasn’t paying attention, not that he’s at all attuned to the wants and needs of others. It’s funny how, somehow, people live up to their name, and the perpetrator of this movie is one Jay Woelfel and indeed everything about this THING is indeed woeful. How DARE he unleash this atrocity on the public? How come there’s no repercussions for this?

Amazingly, Iron Thunder was at our local library. Even at a rental cost of zero, it was not worth it. It actually takes a toll on you. Avoid this movie like the plague.

Good review. I'll have to avoid this one for the time being.

Wow! A rare Zero Stars review. Sometimes it's fun to read a good trashing of a movie. Especially one that deserves it, in the case of Iron Thunder. I haven't seen it, but thanks to your review, there's no need to!

Ryan1234: You might consider avoiding this one forever! Haha.

The Video Vacuum: The sole purpose of this review is to help people and we're glad we can help save you some time (Much like the computer-animated "The General" in those insurance commercials)and also brain cells!

I didn't think this was THAT bad actually, i've seen alot worse, it was a bit too long for it's own good, but I thought some of themes were pretty ineteresting and Richard Hatch gave a decent performance all things considered, i'll admit the effects weren't very good, but they weren't much then the stuff The Asylum puts out, and i'd still gladly watch this film over say "Hard Luck" or "The Quest"

Hmm, that is an interesting opinion. If the plot and pacing were tighter, it could have been a decent movie.

Haha, Hard Luck was pretty bad....The Quest had a wicked boring middle too.

Damn man, zero stars! Needless to say I won't even accept this as a gift.

Haha, getting Iron Thunder as a gift is like getting a lump of coal!

Yikes!! I have to agree with Mitch, since this is a rarity on your site, it's just as much fun hearing you guys trash a film that deserves it. Thanks for the fun read!