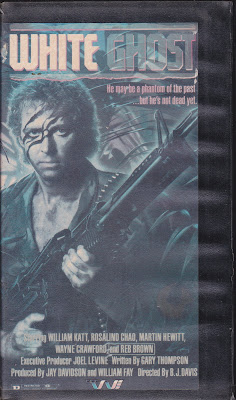 Steve Shepard (Katt) was a soldier in Vietnam. But after all his fellow soldiers went home, Shepard stayed behind. He developed a life for himself in the jungle, and even got a Vietnamese wife (Chao), who now is pregnant with their child. But, to the locals in rural 'Nam, he's known as the "White Ghost". (He even wears white pancake makeup to further compound his reputation). Maj. Cross (Brown) decides to extract Shepard from the jungle, bring him back to the U.S., and find out what he knows. To do this, he hires a team of mercenaries. Now, with both the mercenaries and the Vietnamese army out for his blood, will Steve survive to white it up another day?

When we first see William Katt here, he looks like Christopher Atkins from The Blue Lagoon (1980). i.e., blonde and nearly nude. Somehow, after 15 years in the Vietnamese jungle, he still has a stylish perm. His bizarre afro/mullet hybrid aside, you have to admire his dedication to the hottest styles. Katt's performance (as well as his "outfits"), and to a certain extent, the movie itself, is reminiscent of the great Deadly Prey (1987) - but without about 90% of that movie's insanity. But, rest assured, about 10% is left over.

White Ghost's director, BJ Davis, is the man responsible for Laser Mission (1989), so, there you go. While we greatly enjoyed Katt's presence here (especially his "conviction face"), and think it's a shame he wasn't in more movies like this in the 70's and 80's, we also felt Wings Hauser could have filled the Steve Shepard role nicely. 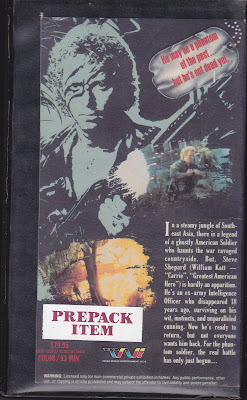 While the movie does start slow, it's worth hanging in there, because it does pick up steam as it goes along. White Ghost is pretty much a slightly above average 80's VHS Vietnam action movie, with all the trappings that would imply. Torture, shooting, booby traps, blow-ups, and of course the guard tower falls and exploding huts we all know and enjoy. But there are plenty of funny and silly moments as well to keep the viewers' interest even further.

As far as the mercenaries in this particular jungle, or the "White Ghost Team" with its "White Ghost Leader", there's the guy that looks like Stallone, the guy that looks like Jesse Ventura, the beardo and John Barrett. Barrett doesn't do all that much here, but you can chalk up another actioner for his underrated career. Their character names aren't all that important, but the scenes with the mercs do provide some more good bits in the film. As for fan favorite Reb Brown, you have to wait almost the whole movie to hear his trademark yells, but they're there all right.

Released on TransWorld in VHS in the 80's, White Ghost is a decent, good movie, worth picking up if you see it somewhere cheap.

Sweet review. I picked a VHS up of this a few months back myself. I think there is a DVD in Poland too, of all places!

Thanks! That's awesome that you also found a copy of this. We have a Polish DVD of Cyber Vengeance with Matthias Hues. The review is coming soon in 2012.

Also why does Poland get all the cool action DVDs?

Cyber Vengeance is ridiculously expensive to get on VHS here in the states, it's like 70 bucks, and I don't think it was ever released here on DVD.

William Katt looks so sweet on the cover. Glad to hear that the film lives up to those expectations. And Reb Brown too? Great stuff.

Venom: Yes, if you look on Amazon, there is one seller selling the VHS for 1000 dollars! It's not worth it. Haha.

DTVC: Thanks! Katt and Brown make quite the team-up. We wish Katt had done more roles like this.

This one is quite great if I remember correctly. High bodycount, lots of violence and of course that sweet mullet! This is available on DVD here in Finland too if you can find it, quite the hidden gem. There are lots of those rare action b-movies gathering dust here and there. Been trying to find the Scandinavian DVD of American Samurai, i've heard it is the only Unrated & uncut DVD of the movie, do you guys have any info on that? It's fucking hard to find it so i'd settle to another version if it's unrated and uncut.

Katt's mullet was excellent! About American Samurai: Unfortunately we have no info but would love to see an uncut version too. It shouldn't be so hard to find.

Also thanks for your comment and following our site!

Oh wow! I have very fond memories of this one. I remember liking it very much and also remember seeing it often at my local video store. I'll always remember that cover for some reason. Great review guys! Glad it's as good as I remember!

Thanks! We are always happy to bring memories to you about any movie you see at the Video Store!

Which video store did you go to back in the day?

Now, there is only one, which is sad. But way back in the day there were several and the ones I would frequent were A-1 Video and Allstar Video.

That is unfortunate that there is only 1 video store left. But that is very cool you used to frequent those. In CT, we had a bunch of Blockbusters and one called Tommy K's.

Lol, yea. Blockbuster is actually the only one we have left in town right now, and who knows how long that will last. The only other one we had was a huge place called Video Stop, which just recently closed. They catered more to the DTV and low-budget stuff. I couldn't believe it when they closed.

Video Stop sounded like an amazing place! That is sad it closed.

All our Blockbusters are completely gone now...replaced by a Men's Warehouse. Lol.