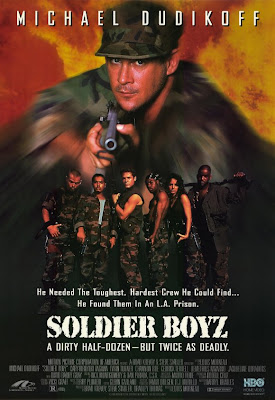 
When Gabrielle Prescott (Hansen), daughter of rich white man Jameson Prescott (Brandt) is kidnapped by the National Liberation Front leader Vinh Moc (Tagawa) and held for ransom, Jameson enlists Major Howard Tolliver (Dudikoff) to rescue her. Thinking he can't do it alone, he enlists a ragtag team of prisoners, and together, they are the titular "Soldier Boyz" (even though one of them is female). They all travel to Vietnam and must train together - and they don't always get along. Will the Soldier Boyz be victorious?

Dudikoff puts in his usual good performance amidst the usual classic cliches, such as the exploding guard towers.  Imagine a Nam Angels (1989)-type situation with a bearded Dudikoff for part of the time. Add in some of The Walking Dead (1995) and there you have it. While this movie is a low-budget actioner with a "Z" in "Boyz" instead of an "S" (S's are just not cool. Z's are much cooler, clearly), this movie is actually well-made. Tagawa is fitting as the ruthless, evil leader, something he's surely familiar with playing.  You basically care about the characters - are they a youth group or prisoners - or a youth group of prisoners? Don't forget, the donation of ten million dollars to their youth group is "non-negotiable"!

The movie is fast paced, with some good action sequences. Tolliver has a bad attitude because his family was gunned down (shown in flashback and never mentioned again). During the extensive training, all the Soldier Boyz try to fight Tolliver and naturally they all lose. Probably because they're not as awesome.

The ending is a bit abrupt, but that's fairly common for these Direct To Video/Cable outings. There's something here for Dudikoff fans.

Watch out for the video game in 1997! (Yes, there is actually a Soldier Boyz game for your PC).

God I love this movie, my favorite moment is when the guy name dMonsters gets a bag with a snake put over his head, then his captors take it off, and Monster spits a huge chunk of snake at them and yells "What's for desert, motherfucker?!" just pure awesomeness, you should also check out "Behind Enemy Lines" with Thomas Ian Griffith, which is a bit of a pseudo-sequel to this film.

I have an obscure Thai VCD of this one but haven't watched it yet. Three stars is a pretty solid Ty recommendation though.

Venom: It was definitely a lot of fun. All the Solider "Boyz" were pretty ridiculous. I saw Behind Enemy Lines a long time ago on the military channel...will have to buy it eventually.

Speaking of VCD's, I recently watched The Rage Within(BTW, VCD's will play on PowerDVD) and that was a pretty good film, it was directed by Mike Norris, who also plays the main role and does a surprisingly good job(much better then he was in the awful Bells If Innocence) and he's ably supposrted by Fred Williamson(though he dosen't show up for half an hour) and Andrew Divoff and Richard Norton both make fantastic villains, they gleefully chew the scenery at every opportunity, the action scenes are also pretty well-done, especially the two Norris/Norton ones, and lastly, it has a very 80s-esque soundtrack, not to mention a catchy rap-rock title song that has to be heard to be believed. I would definitely encourage you to check this film out. It's availible for 6.99 on Yesasia.com right here:http://www.yesasia.com/us/the-rage-within/1002921993-0-0-0-en/info.html

Oh wow! I remember this one....vaguely. Will have to definitely make more of an effort to check it out based on your review! Good one guys!

Still remember this as one of the best ive seen with Dudikoff, brutal, good movie...I enjoyed it a lot...

Venom: Thank you for the excellent suggestion! We will definitely look into it.

RobotGEEK: Check it out, but don't get it mixed with the CD-Rom! :-)

Hellford667: This was a solid Dudikoff effort! Glad you agree.