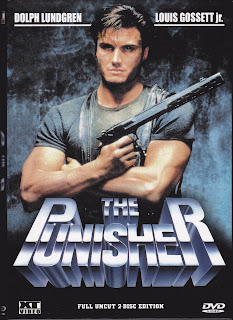 
Following the basic thread of the Marvel comics “anti-hero”, the 1989 Punisher film recounts the now well-known tale of cop Frank Castle (Lundgren), a decent man whose family is murdered by Mafiosi. So being the radically awesome dude he is, not only does he get revenge on the scumbags that killed his family, he discovers that vengeance-based hatred of evildoers is like Lay’s potato chips: you can’t murder just one. So he goes to live in the sewer system and dedicates his life to exterminating bad guys, mainly Mafia types. 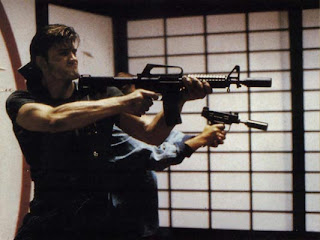 As the tale plays out, we see a gradually developing mob war between the Yakuza, led by the frightening Lady Tanaka (Miyori), and the Franco family of Italian gangsters, led by Gianni Franco (Krabbe). As their war for turf and money and such escalates, the Punisher is there too, picking them off like so many cockroaches.

When the children of the Italian Mafiosi are kidnapped and imprisoned, it’s up to the Punisher to save them, showing he has a human side and isn’t a remorseless killing machine. In an interesting plot occurrence, Castle must actually team up with his despised enemy Franco in order to rescue Franco’s son Tommy (Rooney).  Meanwhile, grizzled cop Jake Berkowitz (Gossett) has been following Castle’s “career” for years and has teamed up with a new partner, Leary (Everhard), intent on finding him. Can the Punisher get any more awesome? 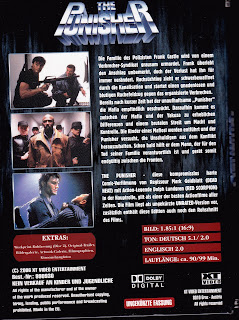 Lundgren was the perfect choice to play The Punisher. Especially when you add the black hair and stubble, his square jaw and outfit, he looks like a comic character (He was also perfectly cast as He-Man for Masters of the Universe, 1987). Speaking of which, the body count in this movie is ridiculously high. Between this, Invasion USA (1985) and No Dead Heroes (1986), the earth has been severely depopulated. But despite the dark tone, this is the type of movie where you cheer every time a baddie bites the big one. The antagonists are made to hiss and boo at, and all the many henchmen are bumped off in a variety of different ways and in different locations, so the copious murders never get boring. Sure, there are countless deaths, but they’re FUN deaths.  Castle is even “credited” with killing 125 people before the movie even starts. 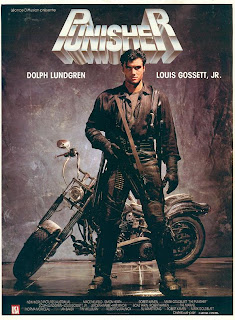 There are some classic bits, such as the obligatory torture scene, and the drug deal at the docks we’ve seen many times, but the idea of Mafia vs. Yakuza vs. The Punisher is just too cool. And the movie, thankfully, lives up to that cool idea. We get “motorcycle cam” of Castle riding around on his chopper, and even the bad guys have a nifty hideout worthy of any James Bond film. Of course, we’d be remiss if we left out the wacky sidekick. This time around it’s Shake (Otto), a drunken former actor that rhymes most of his lines. The equivalent character is the one “Newman” played in Punisher: War Zone (2008).

Louis Gossett Jr. always brings the goods and here is no exception. He and Dolph must be buddies, as they teamed up again for Cover-Up (1991)...perhaps Gossett wasn’t available for The Peacekeeper (1997) so they somehow rounded up Montel Williams to fill his seat. But the heavyweight Gossett can’t be easily replaced. For the main baddie they scored a classy actor in Jeroen Krabbe, who, if anything, seems even more evil in his stonewashed jean jacket. 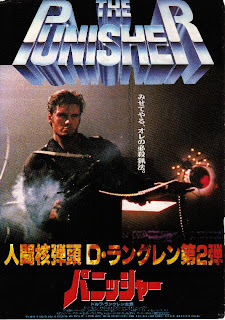 On the technical end, this is a New World film, shot mainly in Australia. It was directed by Mark Goldblatt, the man responsible for Dead Heat (1988), the love it-or-hate-it Treat Williams vehicle (we love it). Now for the important part: the U.S. VHS is cut, shorn of many violent bits. If you’re going to buy this film, and we recommend you do, you have to get the 2-Disc Austrian DVD on the XT Video label. It comes in a hardshell box, and contains the uncut film on one disc, and the “workprint” on the other, along with some extras. Even though we had previously seen the VHS, to re-watch it on this DVD was a revelation. For a movie that revolves around violence so strongly, it would be crazy to see any other version.

Love it! Thoroughly entertaining review on one of my favorite films ever. Great job guys!

I think we were "all" waiting for you to get to this one. :) It was well worth the wait.

Thanks! :-) Dolph at his absolute best: killing hundreds of baddies! haha.

Great film, very cheap looking at times but lots of fun. Dolph really pulls off the character a lot better than Jane and Stevenson.

People who baulk at the lack of skull t-shirt are missing the point. This is proper old school Punisher.

Can't agree more. Dolph did a great job as Castle. But Stevenson also did a commendable job too. Thought Thomas Jane was the weakest Punisher...but that was the script's fault. (The torture scene with the popsicle?...come on!)

True, Stevenson is a close second. It's a shame Dominic West's performance dragged that film down.

I like Tom Jane but he really didn't suit the Punisher at all. I think that popsicle thing might have come direct from one comic but yeah, just looked so lame on screen.

I am wondering how this 80s Lundgren film passed me by. I must check it out asap!

Sorry Jack, I have to disagree. The lack of the skull on the shirt irks me something fierce. The skull is iconic. Why remove it? Imagine Superman without his "S". For me, this is a Four Star movie all the way, but I have to deduct points for having no skull on the shirt. Sorry, that's just how I feel.

Jack: Dominic West was pretty silly in the film but Looney Bin Jim stole the movie! The Thomas Jane Punisher was such a disappoitment...The singing hitman, aformentioned popsicle and Travolta sleepwalking through his role.

Dan: Awesome! Looking forward to your opinion on it. We have a feeling you will enjoy it.

Videovacuum: Have to agree with you about the Skull emblem. It should be on all Punishers.

I'd go as far to say that this version is maybe the best Punisher movie out there. It's not as dull as the Thomas Jane one and the over the top action doesn't get tiresome after a while like it does in War Zone.

I also have to agree with thevideovacuum. As an avid comic collector all through the 80's (Punisher War Journal being my favorite), it was so disheartening that for the Punisher's very first film, they chose not to include "some" kind of skull on his clothing. It just didn't make any sense and was a really bad creative choice.

Totally agree. This is the best Punisher movie in our opinion!

Great review, fully agree. Best Punisher, Dolph is bore to beat the mob. Love the film such a shame that so many people didn't see it as it's excellent.

RobotGEEK: They should have some sort of skull emblem in the movie. That was an oversight.

John: It definitely should gotten its due as one of the better Marvel movies of the 80s.

I love all three Punisher films, and I think Jane actually made for a pretty good Punisher, yeah I could've done without the popsicle scene(and the opera singing, though the fight against The Russian was pretty badass) but he was still really effective in the dramatic moments, and I like that the filmmakers upped the stakes and killed Castle's whole family, that made the story even more involving. Ray Stevenson was the weakest Punisher for me as he was kinda stiff and he just didn't seem to have that much conviction for the role.

Louis Gossett giving the cop with the computer a hard time rules "whatcha ya gonna do with that play Miss Pacman?" Ninjas on super-slides firing automatic weapons....evil yakuza woman with dagger earings...the list of awesomeness goes on and on for this one! I need that import DVD now!

Venom: We respectfully disagree about Stevenson. He put in a quality performance as Frank Castle. He's tough-looking and fits the role very well.

MarkusWelby1: We agree. This movie doesn't get the credit it deserves for having creative ideas that are audience-pleasing! The DVD is definitely worth adding to your collection.

Stevenson may look tough, but he lacked the "human" quality that Jane and Lundgren had in their versions of the character. Don't get me wrong, I enjoyed the hell our of Punisher: War Zone, it was pretty fun and the over-the-top, but the villains in that film were alot more interesting then Frank himself was, his guilt over accidentally shooting an innocent man didn't really add anything to the film, that whole subplot could've been cut with the film without making much of a difference, and Stevenson just dosen't see to be very good at doing dramatic scenes, I personally wish Jane would've returned(he declined because he didn't like the script)

Totally agree with you about editing the sub-plot with Castle killing the innocent...that slowed the movie down.

Loved all the over the top violence in War Zone also, if they make another installment, maybe they can get Jane back...but it needs to have a better script.

Woah, sorry. Just to clear my name, I too can't understand why they dropped the skull but the quality of the action ALMOST makes up for it.

The action in the Dolph version was really good, you almost forget about the skull not being there.

Great stuff! I totally love this movie, it's my favorite big screen adaptation of the Punisher. Glad you loved it too!

Thanks! It is just a blast! Dolph was perfect as The Punisher!

I almost forgot about this one!]
Wonder whatever happened to Lundgren...?

This is definitely one of his best action flicks! Dolph is still around making action movies. Plus he totally stole his scenes in The Expendables.

I have only seen the workprint version; I liked it and disliked it at the same time. As a generic B-action flick it was pretty damn good. As a Punisher film it sucked.

Will have to see the uncut version to pass final judgment. Ray Stevenson is, by the way, the best Punisher.

The Dolph version is a favorite around these parts, but the Ray Stevenson version was very entertaining too!

One of the best movies ever made. I'm a big Punisher fan, and the movie was so good, I forgot the skull on the shirt was missing. On VHS in Finland, the movie was cut by 13 minutes(!). The censors really hated our action heroes. Forced Vengeance was cut by 12 minutes and Bloodsport was cut by a record 20 minutes. Can you imagine a punchfighting movie without the punchfighting? Luckily, Finnish movie censorship finally died a gory death in 2001.

We appreciate the info about the cut versions. That's always valuable info for us and our readers to know.

Dolph is at his awesome killing best in this one.