Wilding: The Children Of Violence (1991) 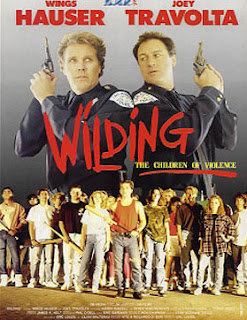 Parsons (Hauser) and Peters (Travolta) are cops on the beat trying to get to the bottom of a rape/murder case. Parsons is the more hardline dude (sporting some cool sunglasses) and Peters is the cop with a soft spot. As it turns out, the victims were subject to rampant wilding - presumably a group of kids going nuts. But it went too far. Tommy Baldwin (Steven Cooke) is a high school student who is leading a double life as an amoral wilding leader. He is egged on by his second-in-command Jason (Anunciation). Perhaps only the power of family, as represented by Tommy’s father and brother (Chris McCleod and David Crane) can save Tommy. Or will it be something else?

Not to be confused with Night of the Wilding (1990), here we have ANOTHER wilding movie. And the amazing part is - Joey Travolta is in both! Surely this must be a movie first. There are only two movies about wilding that we know of, and Joey is there whichever way you turn. How did this happen? Did he specifically request to his agent that he only wants to star in movies about wilding? Or is it purely a coincidence? Nevertheless, Joey is at his best here. It must have been a challenge to hold your own against co-star Wings Hauser, but Joey just about upstages him. 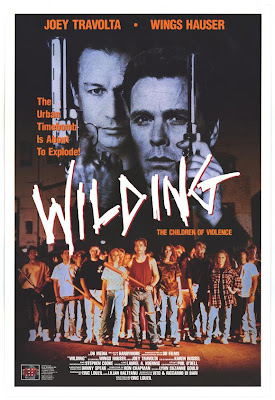 In the late 80’s/early 90’s, wilding must have been a topic that was on everyone’s minds, and AIP wasn’t about to let the opportunity slip away. Sure, there is some mild social commentary within, but some of the acting/non-acting is hilarious and there are two huge laugh-out-loud moments as well. We won’t spoil them for you here. Also, Tommy’s father looks like Dick Butkus and wears some great outfits (everyone in this movie has great outfits). The character of Jason, who is supposedly so evil, looks like a 10-year old dork. He resembles a cross between Lou Diamond Phillips and Alfred E. Newman.

As for the wilding, it mainly seems to consist of kids watching cars race dune buggies. And one kid in the crowd is juggling. Yep, that’s how you know these kids are up to no good. “They know how to juggle, let’s get out of here!” Other indications that these teens are rebels are the posters and T-shirts they have. Guns n’ Roses, Iron Maiden, Ozzy Osbourne, The Ramones, The Clash, Sex Pistols and even Mentors merchandise can be seen. If they’re “punk” or “metal” you know they are on the outskirts of society. The influence of the movie Suburbia (1983) comes through here (and elsewhere). This is best exemplified when Tommy’s brother, perhaps the ultimate preppy, goes to their lair and conflict ensues.

Adding to the overall vibe of fun, low-budget silliness is the fact that there is a montage of highlights from the movie during the opening credits. You don’t see this too often, mainly because filmmakers probably don’t want to spoil any potential surprises. But not director Eric Louzil (best known for his Troma work).

Also it should be noted that Wilding is filled with great music, highlighted by the title song, “Don’t Try to Stop Tomorrow” by Tiziana Rivale. This Pat Benatar-like tune will be stuck in your head for days.

A lot of fun, see this movie if you get the chance to. Of all the wilding movies, this one stands head and shoulders above the other one.

Check out the trailer!

Thanks, buddy! The movie is goofy fun.

This one looks sweet. I have another Wings Hauser lined up for my next one, but this is definitely on the short list. Plus, the Joey Travolta factor makes it more enticing.

Definitely looking forward to your next Wings Review! I wonder what it is? Also would be interested in your opinion on this one.

Thanks for your comments. We appreciate you taking the time to provide that behind the scenes info. That was interesting. Did you get to meet or see Joey or Wings? Write back anytime.