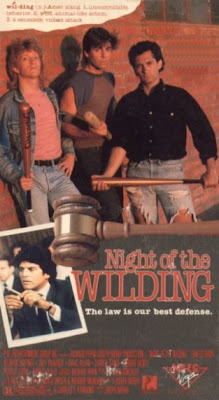 
PM goes for something different here, taking a break from out-and-out action movies and delivering a courtroom drama inspired by the then-new show, Law & Order.

Joseph Gainer (Estrada) is a high-powered Beverly Hills defense attorney who has never lost a case. Constantly defending scumbags and releasing them back out into society seems to be getting under his skin, however. Three teenage psychopaths, led by Carl Sloan (Allan) - the other two being the token “weak link” who has somewhat of a conscience about their evil deeds, Alan (Dickey) and Carl’s right-hand man, Martin (Ganis) break into a house and assault and rape Betty Truesky (Austin) and Doris (Kimberly Spiess, better known to adult film fans as Carol Cummings). They also attack another member of the family, a man named Bill Paxton! (Verroca, sadly not Bill Paxton). Gainer ends up as one of the lawyers defending the little jerks, and the prosecutor is his former wife Marion (Kathrin Lautner AKA Middleton). They still have a rapport, and issues of law and justice are continually coming up. What will be the fate of Betty, Doris, Carl, Martin, Alan, Joseph and Marion?

Like the aforementioned Law & Order, PM and director Joseph Merhi do a “ripped from the headlines” type of story about the incidents of “Wilding” in the late 80’s/early 90’s. The title “Night of the Wilding” is somewhat misleading for a courtroom movie like this. It’s not exactly in the same league as Night of the Kickfighters (1988). Plus, is a home invasion /attack really wilding? No one is sure exactly what “wilding” is, but we’re pretty sure it’s out in public. Not in private. This movie brings up questions like that. Can you “wild” in the privacy of your own home? 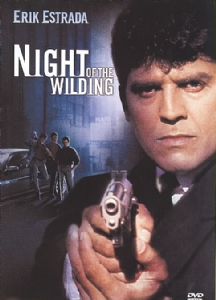 Estrada, who is perfect for a role like this, does reasonably well. Some of his clothing, especially his out-of-the-courtroom casual wear, is quite something. Sure, he has a mullet, but you know he’s one of the good guys because the evildoers have longer, eviller mullets.  It’s weird - at times the film seems to go as close to an authentic legal drama as it can - and other times what happens plot-wise is utterly absurd.  Add some odd clarinet music on the soundtrack, and Joey Travolta for some reason, and the result is Night of the Wilding. For more Joey\Wilding action see: Wilding: The Children Of Violence (1991).

The obvious highlight of the film occurs right towards the end and involves a  baseball field. That’s all we’ll say. Watch out for it.

While not what you’d call a classic or a typical PM, we give them points for not simply churning out another blow-em-up movie, but we’re not sure this more dramatic approach reached its target audience. After all, PM makes the BEST blow-em-ups, and that’s what fans want. It’s nothing to be ashamed of. Fans of TV-movie style courtroom dramas probably never found this movie in the first place, while PM aficionados (I assume they’re out there) more than likely won’t be adding this to their top 10 list of favorite PM’s.

While there is some clunkiness, especially in the acting department, Night of the Wilding is really not that bad (especially considering some of the unintentional laughs), but don’t go in expecting fireworks.

Joey Travolta! Hilarious! I love it when the siblings of famous actors end up in crap. Isn't there some flick with Patrick Swayze's and Chuck Norris' brothers?

We also love that too! There are two hilarious movies with Don Swayze: Death Ring (with Mike Norris) and the "classic" Money To Burn with Chad McQueen and Joe Estevez!

You should also check out "Sinners" for more Joey Travolta, he's actually pretty good in that film.

Cool! Thanks for the suggestion. Will check that out.

I'll have to give this a look, especially for the Estrada factor.

Another "Wilding" flick! Hell yea! Or maybe not, based on your review. lol. I dig Estrada though, always wished the guy had a bigger film career, he totally deserved it. Great job guys!

DTVC: Estrada was great as usual, wished the movie was just a little better.

RobotGEEK: Thanks! Lol, Estrada should have made more action flicks. But he did make Light Blast which rocks the house and hopefully (an upcoming watch\review) The Lost Idol is good.

Woah Beach Babes from Beyond looks hilariously silly. What a cast!

that's not the one i'm thinking of but i recall some early 90s dtv movie with more than three famous siblings.

maybe they can do a dtv siblings version of expendables.