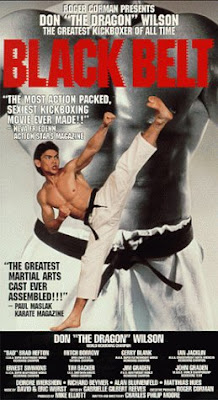 Jack Dillon (The Dragon) is an ex-cop turned martial arts instructor. He also does favors on the side for people that need help but can’t exactly go to the cops. When up-and-coming singing star Shanna (Imershein) receives a severed finger in a box, she turns to Dillon for help. Shanna has other problems as well, as her “backer” is mobster Eddie Deangelo (Beymer). He’s pressuring her to sign a new contract with him, and she doesn’t want to. Naturally Deangelo focuses all his rage (and goons) on Jack Dillon, her new protector. Amidst fighting his way through the underworld to protect Shanna, Jack discovers that insane, murderous, psychopathic ex-mercenary killer John Sweet (Hues) is behind all the mayhem. Only a confrontation between Dillon and Sweet will determine the fate of Shanna, among other people. Who will win?

As this is a Corman production, it seems he wanted to go with the Bloodfist formula of having real-life martial artists in the cast, and with their screen credit along with their name is their fighting title. Also it’s 80 minutes, so right there we see the formula. But Blackbelt is truly Don “The Dragon” Wilson at his best. His lovably wooden performances are here in full, but he gets a ton of great lines (pretty much all of them, and they’re almost all snappy one-liners). Wilson worked on the fight choreography, and in true early-90’s fashion, the violence is simultaneously brutal and, at times, very funny. Both his, as well as Matthias Hues’ entrances are both great and it’s a treat to see them together, and their final fight doesn’t disappoint.

Hues also puts in a career-best performance as the Psycho (1960)-inspired Oedipal bad guy. Sure, Hues is always the baddie, but here he shows some depth as the ironically-named Sweet. Also, according to the plot, his blows are powerful enough to kill people. And his yells and grunts are priceless.

Naturally, in a classic cliche, Dillon and Deangelo “go way back” - and it should be noted that even though Dillon isn’t officially on the force, he has a partner, Sturges (Blumenfeld). There really should have been a Dillon and Sturges TV show. It would have been a great cop drama - the classic, dedicated but pudgy cop and the Karate-fighting ex-cop solving crimes. What’s really criminal is that this was never made. But at least we have Blackbelt. (However, that title is somewhat misleading, as Dillon’s, nor anyone else’s) belt level is ever talked about, much less fought over.

Not to be insulting to Miss Imershein, but the role of Shanna should have gone to someone just a little bit hotter, perhaps Wilson’s Ring of Fire (1991) co-star and frequent Corman starlet Maria Ford. Then their relationship would have been more believable. But watch out for the posters of Shanna gracing the cover of “Rock” magazine (not meant to look like Spin, surely), along with Pearl Jam. Hey, it was 1992 after all. But all her accolades are certainly deserved once you see her perform the song “Love Rocket” - along with the background dancers who are so comatose they make Robert Palmer’s “Addicted to Love” girls look like a row of Rip Taylors on speed.

As for the VHS box: The story for the movie was co-written by Neva Friedenn (who also wrote for other Wilson vehicles) - and on the cover there is a quote: “The most action packed, sexiest kickboxing movie ever made!!” Note the two exclamation points. And guess who the quote is attributed to? Yes, Neva Friedenn! You can tout your own productions on their VHS boxes like that? Who knew? Additionally, they misspell “Matthias” when talking about the mighty Hues. Just shameful, really.

It should also be noted that Ian Jacklin is in this movie for about one second. Despite that, this movie is still worth seeing, as it is an entertaining romp from the golden age with two of the genre’s most beloved stars. What’s not to like?

Great review guys! Love this one. I have many, many fond memories of watching this one many times when it first hit VHS. Good memories!

Cool review,agreed. It's always awkward when the hottie is not a hottie. Ford is always an excellent choice.

back then I liked it, especially the ending....but nowadays I wouldnt wanna watch anything that stars Don Wilson anymore..

RobotGEEK: Thanks! We are happy this brings back good memories for you.

John: Thanks! Can't agree more, Corman should always get Ford to team up with Wilson.

Hellford667: Haha, true, but maybe one day he will make a straight to dvd comeback!

I had a lot of fun with this one too, especially Matthias Hues's regenerating finger.

You know what they say: Matthias Hues has magical regenerating powers, much like a starfish.