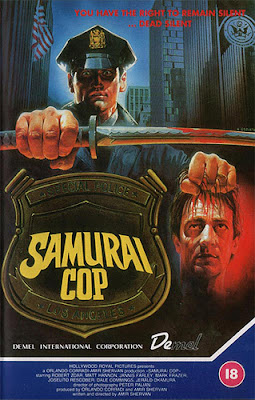 
Attempting to describe Samurai Cop is not easy. It’s like director Amir Shervan and everyone else involved made this movie without having ever seen another movie before. Only having HEARD of something called a “movie” and trying to make one themselves, sight unseen, with nothing to compare it to. Thus, Samurai Cop is chock full of non-actors giving hilarious line readings, absurd dubbing, and hacksaw editing consisting of various scenes of strange-looking people attempting to communicate with each other in ways human beings have not yet seen.

This is probably pointless, but  here’s the plot: the evil Katana gang is causing all sorts of trouble in the L.A. Area. Chinese and Japanese gangs are at war and there is violence everywhere. Luckily, the LAPD has an ace in the hole: Joe “Samurai” Marshall (Hannon), a long-haired, orange-skinned freak who just learned English a few weeks ago. They called him in from San Diego because of some sort of expertise in Japanese culture, hence his nifty nickname. They team him up with Frank (Frazer), presumably because of his mastery of reaction shots.  Peggy (Moore, who apparently has taken this film off her resume) is a female cop helping them out, because Yamashita (the non-Japanese Z’Dar), Fujiyama (Rescober), and Gerald Okamura as...wait for it...OKAMURA are a serious gang to be reckoned with  Back at the police station, the angry chief to end all angry chiefs is Captain Roma, the apoplectic but somehow lovable boss.

This movie is absolutely hilarious. The dubbing alone is worth the price of admission. Supposedly found languishing in a vault in Italy and brought to light by Italian cinephiles which led to its eventual DVD release on Media Blasters (complete with a funny Joe Bob Briggs commentary track), Samurai Cop stands alone in its charming, winning, violence-and-nudity-packed ineptitude.

But top honors must go, not to stalwarts Robert Z’Dar and Gerald Okamura, but to American hero Matt Hannon. Not credited with any other movie, and supposedly a one-time bodyguard for Sylvester Stallone, this man is amazing. Perhaps the ultimate meathead, he makes Chip Mayer look like Joe Lara, whatever that means. The fact that “Samurai” Joe Marshall is supposed to be this great womanizer is too funny.  He’s so unbelievably wooden, he makes the Amazon rainforest look barren. And his quasi-nudity doesn’t help matters. (Nor does the quasi-nudity of Z’Dar and Okamura, but it is balanced nicely with some softcore porn-type scenes that pad out the inexplicable 96-minute running time).

Perhaps director Shervan was going for a Lethal Weapon/Miami Vice sort of thing, but the stunning lack of continuity or any sort of pacing make the movie seem like a complete absurdity, almost a surrealist film. Due to its breaking of just about every rule of filmmaking, it seems like a child made it. While watching the movie, you can’t help but ask yourself “where did they find these people?” Apparently it was named Samurai Cop to cash in on the whole Z’Dar-Maniac Cop connection - but just ignore the misleading box art. Comparisons could also be made, at least in the buddy cop department, to Action U.S.A, but Frank is no Panama, sadly. Naturally it all ends in the time-honored “Final Field Fight” after Frank and Joe have killed all the mulleted goons around. 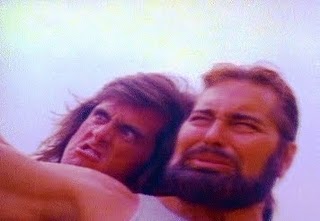 An awesome, one-of-a-kind movie that seems like it was made on another planet, Samurai Cop is a classic for the ages.

One of my favorite bad films of all time. Z'Dar is hilarious and Matt Hannon is inept in every conceivable way. They don't make them like this anymore.

It is one of the classics! Wished Matt Hannon made more movies!

Im definitely gonna this one tonight after work! With a cold beer and on my back in my couch. Thanks for the heads up, guys!

No problem, Lizzardking! Enjoy the movie!

I've had this in my Amazon cart for ages now, waiting until I have enough cash to make a large order. It certainly looks like it ticks all the right boxes.

You will definitely enjoy it, Sutekh! It is a lot of fun!

Tons of fun. Best line from the angry chief: "I feel like someone shoved a club up my ass... and it hurts!" I think if I came across Matt Hannon on the beach, and he was wearing a Speedo, I'd shake his hand.

Definitely agree with you. So many great moments: the partner's reaction shots and anything Hannon or the chief said (especially Hannon's speech at the restaurant).

i had that same feeling in the first paragraph while watching the room, birdemic, bad boys ii, and charlie's angels 2

You are totally right. All the movies you mentioned definitely have that insane quality to them.

Especially The Room and Birdemic.

Man, how did I miss this one? And does anyone get beheaded (like on the box illustration)?

Yes, there is a decapitation, but it is not the most insane part of the movie.

Also does anyone else think that Mark Hanon looks like the results of putting Tommy Wiseau and Greg Sestero in some DNA blender?

Haha! I can see that DNA match.