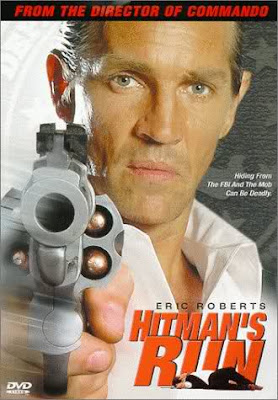 Former hitman Tony Lazorka (Roberts) (how do they come up with these names?) is now living as a happily married family man in the suburbs of L.A. He thinks he’s far from his past, having worked has a hired killer for mob boss Dominic Catania (Miano), but when yet another “Disk” (as in, “we’ve got to get The Disk! - which we’ve all seen so many times before) surfaces that contains other people in the witness protection program, Lazorka must team up with annoying punk kid Brian (Powell) to save his father, and Lazorka’s kidnapped family. And what do FBI agents Tom (Howell) and Randall (Huff) have to do with all this intrigue? Will Lazorka be successful?

This movie is very, very dumb. That’s not necessarily an insult - there are varying degrees of dumb. There’s dumb dumb, there’s just plain bad dumb, there’s funny dumb, etc. Luckily, Hitman’s Run falls into the “yeah, it is very dumb but there are plenty of unintentional (probably) laughs” category...but there are some major caveats here - read on...

Eric Roberts is definitely a major meathead in this one. His hair, clothing and demeanor are all very silly, and he strongly resembles Antonio Banderas, especially from Assassins (1995). Don’t forget, Roberts also plays an assassin here. Why the filmmakers decided to use a dud like Assassins as their template for greatness is somewhat puzzling. During all the blow-ups and shooting, the bad guys constantly have terrible aim and Lazorka’s is always right-on. Sure, that’s fairly common I suppose, but there are a lot of just hilariously implausible scenarios on show here (again, not necessarily a negative). 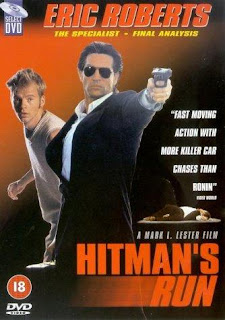 And while C. Thomas Howell looks like a young kid here, this was actually released three years after the great The Sweeper (1996), where he plays a macho tough guy. It really shows his range. This movie could have used more Howell. Brent Huff and Damian Chapa are also on display, and it’s nice to see them, as well as fan favorite Robert Miano. Unfortunately, the movie makes a major mistake with the kid. Why, again, would the filmmakers use such poor judgment in thinking any audience any where would like this irritating punk, much less not want to twist his stupid head off like a bottlecap, remains unknown. All he does is spout grating cliches, or, when Lazorka is doing his action stuff, say “Whoa!” and things like that. Sure, the kid from American Ninja 5 (1993) did the same thing, but he was a kid. As an older teen, he has no excuse. We’d love to know what the writers were thinking with this Poochie-like decision. Importantly, he also wears a sleeveless sweater throughout the whole movie. A SLEEVELESS SWEATER. Who even knew they existed?

Hitman’s run is fairly cartoony and could have used some grit. Then just dump the kid and have Eric Roberts go on a solo revenge mission to save his family. THEN Hitman’s Run would really have something. But the quality is junky, and the unnecessary addition of the stupid punk kid really sinks things.

We all love Eric Roberts, and all the other names in the cast as well, and the aforementioned dumbness alone is no big deal, but, married to the addition of the kid, Hitman’s Run might be very trying to the patience of viewers. When the dumbness is the SAVING GRACE of the movie, there’s a definite problem.

Also check out our buddies Direct To Video Connoisseur and Eric Roberts: Our Movies reviews!
Posted by Ty at 1.3.12

Nice review, Eric Roberts and C.Thomas Howell together, wow. Do they get to share many scenes together?

Thanks! If we are not mistaken, they don't share any scenes. Which is unfortunate.

I acutally kinda liked Assassins, though it would've been considerably if it was at least 20 minutes shorter, as for this film, I thought it was merely OK, I don't even remember the teen sidekick to be honest.

Assassins should have been so much better. There was barely any action it it! Haha.

The teen sidekick in this was pretty annoying, thankfully Eric Roberts tried to save the movie.

I went back to my review, and it was pretty much the same as yours, especially with regard to the teen sidekick. Why do movies do this? When have any of us watched one of these and thought "You know what this movie needed? An annoying kid cracking bad jokes." or "Man, that kid really enhanced the film, this would've been crap without him whining and getting in the way."

Haha, so true! There is no need for annoying kids or teens in action films. It makes the movie worse.

I don't mind kids and teens too much usually, what I do find irritating is the fat bumbling comic relief character that usually seems to show up in these types of films.

Definitely agree about that too. No need for the fat guy! Usually there is a tuba following him while he eats a sloppy hamburger...a perfect example is in The Retrievers. There is fat guy named Big Mac!

cool review. i was disappointed by this: should have been more fun. you have Roberts (legend), the director of Commando (legend) and loads of gun blazing action (always a good thing) but it was all just too sloppy and a little dull. shame...

Thanks! You are absolutely right. This had all the ingredients for a solid action flick. What a disappointment.

The Butcher (Directed by Jesse Johnson who made Pit Fighter) with Eric Roberts gets it right!

totally. The Butcher is an awesome action flick...

Can't agree more! It was non-stop action and Eric Roberts at his best.

This from the director of Commando and Showdown in Little Tokyo?! For shame!!

I know! Very embarrassing for everyone involved.