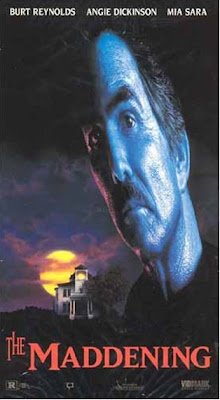 
It’s “Burtsploitation” at its finest as the legendary Reynolds plays an evil psycho in a DTV thriller.

Roy Scudder (the Burtster) and his wife Georgina (Dickinson) live in a creepy old house somewhere in the backwoods of Florida. For their own twisted psychological ends, they kidnap Cassie Osbourne (Sara) and her young daughter Samantha (Buglewicz) and force them to become members of their family. While they’re trying to escape their clutches, Cassie’s husband  David (Wimmer) and police inspector Chicky Ross (Mostel) are also trying to get to the bottom of their disappearance. Will they escape with their lives...or will their attempts just be MADDENING?

Trying out the “Old Dark House” scenario with some Psycho (1960)-like moves on a very low budget, The Maddening really is just a standard, dumb hostage drama but with a few “creepy” shots and musical stings. It should have been more of an out-and-out horror movie with a higher kill count, and what further sinks the notion of horror-ness is some stupid humor. Typified by, among other things, the “comical” fat detective that is always eating and even has stereotypical tuba music playing when he walks. Last time we checked, that’s not what horror fans want to see. 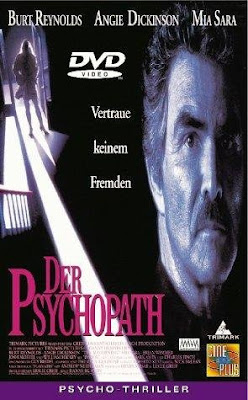 What they DO want to see, obviously, is Burt Reynolds. He has some sort of Southern, perhaps Cajun accent that comes and goes, and the absurd toupee he wears looks like a squirrel glued to his head. But for menacing glares, you can’t do much better than the U.S. VHS cover. This may have been made in the 90’s, but it’s no Malone (1987). The rest of the movie has an odd, stilted vibe.

While the movie has a reasonably professional air to it, due largely - probably - to famous Danny Huston as director - it’s kind of hard to imagine anyone being really SCARED by The Maddening. Unless you’re a kid, but then why would you be seeing The Maddening? Unless your parents rented it and you happened to see it...see, this could go on forever. It’s the type of thing that keeps you up at night, We tell ya. 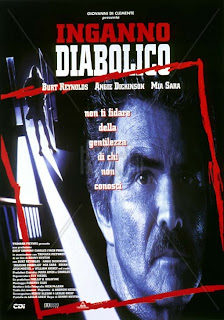 The Maddening is an oddity that only could have happened in the 90’s. It has some big names in a scenario that wavers between unintentional “laffs” and scenes of child abuse. Burt fans surely would want to see him in a rare bad guy role, but the end result of it all is pretty ridiculous.

The Maddening used to be on TV all the time not long after it came out. I remember the ads for it, with this dark foreboding voice telling us "The Maddening, starring Burt Reynolds, Saturday at 10PM." I haven't seen it in forever, but i remember it being pretty paint-by-numbers.

Good memory! This is a perfect time-waster...it was very predictable, but definitely not bad.

That is unfortunate! Hopefully you will get to see it soon.

Just caught it on Showtime. Billed as a mystery & suspense, great music, surprisingly entertaining, no where near the worst movie ever. You got to love the 90s and their wackiness, too true this would never be made today. Reynolds was great, their bloody psycho kid was the true horror. Great death scene for Burt, symbolism!!

Can't agree more! Reynolds killed it. You can't make this movie anymore. Classic 90s. Thanks for your comment.