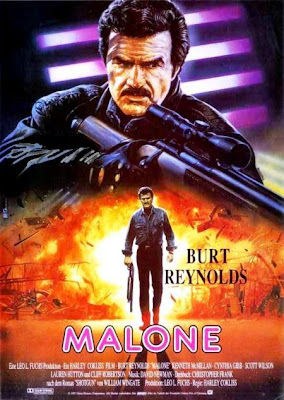 
Richard Malone (Reynolds) is a former CIA assassin and Special Ops soldier whose car breaks down in the sleepy burg of Comstock, Oregon. He’s trying to escape his past, but he runs afoul of the sinister Charles Delaney (Robertson), a small-town megalomaniac who is trying to take over the world. While in Comstock, he makes friends with the kindly mechanic and garage owner Paul (Wilson), and develops an interesting relationship with his young daughter Jo (Gibb of Death Warrant  fame). The town he’s in is so small, he even develops fame among the locals as “The Guy With The Car Trouble”. Even though Jamie (Hutton) is trying to stop his violent ways, he cuts through the corruption and red tape of the local Sheriffs and takes on Delaney and his many goons. 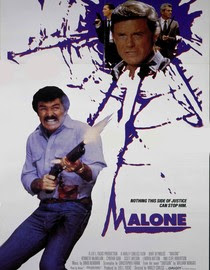 Malone is 90 minutes of stupid entertainment at its finest. It’s chock full with funny lines and absurd situations, way too many to recount here. Burt Reynolds' monosyllabic performance is just amazing - his contempt for the very fact that he has to be there is so open and unmasked. Luckily for the audience, that’s absolutely hilarious.  But it’s not just Reynolds who has checked out: Robertson as the smarmy land developer who sends thugs to kill off his rivals is a total paycheck role. Both men phoned in their roles to extremely funny effect. I assume this was unintentional. Perhaps Reynolds assumed his mustache, funny faces, expanding gut and bizarre toupee would carry the day. As it turns out, he was right! It totally does.

A lot of the running time of Malone is comprised of various people asking Richard Malone what his name is. There’s always a pause, and then Reynolds exasperatingly exhales “Malone”. This takes up a good 20-30 percent of the film’s running time. Fortunately, this scenario gets funnier every time it happens. 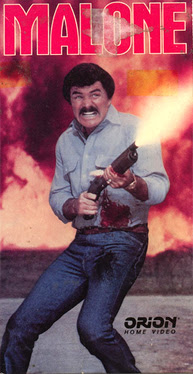 It has been noted the film’s many similarities to the classic Western Shane (1953), but it also appears the later Radical Jack (2000) was heavily influenced by Malone (as has everyone else that’s ever seen it). A mysterious man comes to a small town, a man that happens to be trained in the deadly arts, and tries to stop yet another small-town crime boss (I guess every little town has one) and must fight the “evil yokels” along the way. 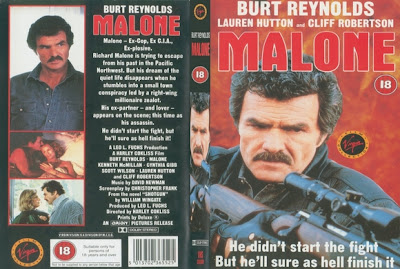 On the technical side, if you live in America and have Netflix streaming, watch Malone that way. It’s in widescreen and the print they found is stunning. Even though we had seen it on VHS previously, watching it on streaming was like watching it for the first time. It really brought out the full potential and many nuances of the film.

You’ll be singing “I think we’re Malone now” as you laugh your way through this very enjoyable gem.

Thanks Lee! Totally agree, Classic Burt. Can't believe he is 75!

I love the scene when Raven tells Scott Wilson (during a conversation about 'Nam') that his active service started in 1961.
Wilson asks "Wasn't 1961 a bit early to be in Vietnam?"
To which Malone replies "Not for what i was there to do"

Sutekh: Burt has some pretty crazy movies out there! Malone is one of his best! That Orion cover is hilarious. Doesn't he say Burt's name on it! haha.

Lee: Killer line, Wished they made a Malone II!

I love this movie. I think it's hilarious how a 50 year old Burt spends most the film doing a James Dean impression.

Malone Rules! That is so true, Glen. Also love that he put next to no effort in his James Dean impression.

I haven't seen this in years. Thanks for bringing it back to my attention!

Your Welcome DTVC! It is definitely worth watching again!

I'm going to have "I Think We're Malone Now" stuck in my head all day. Awesome.

You are right Anto: It is such a catchy tune!

You sir.....are taking me back to the video store days and had to choose your poison merely by what the VHS cover had to offer you.....choose wisely! My dad and I LOVED Malone! You simply cannot go wrong with El-Mustachio.

We're very happy we are bringing back memories for you! Malone was great. Burt at his best!