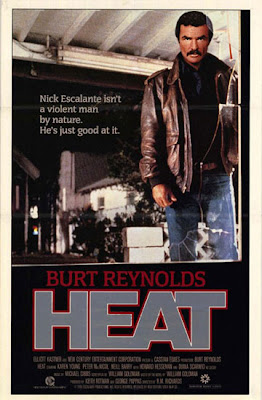 Nick “Mex” Escalante (Reynolds) is a Las Vegas-based gambler and bodyguard that kind of just drifts through life, going from adventure to adventure - whether it be getting revenge for the rape of his friend Holly (Young) or teaching new acquaintance Cyrus Kinnick (MacNicol) how to defend himself. He just wants to scrape together enough money to move to Venice, but all of his enemies, especially his latest one, Danny DeMarco (Barry) - want to prevent this from happening.

This was the beginning of Burt’s “Not Caring” period. Probably due to circumstances in his personal life, what was probably perceived at the time as just a droll performance, is actually how Burt carried out most of his work from here on in. This movie not only has a slow pace and is talky when there should be action, it seems less like an action movie and more of a rambling drama. The fact that Robert Altman was originally slated to direct makes a lot of sense. 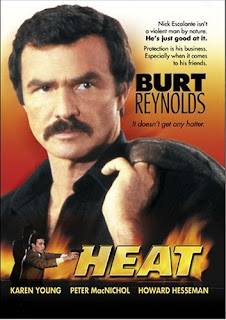 The few action scenes there are happen to be absolutely priceless - they’re very funny. But their humor, whether intentional or not, does not match the tone of the rest of the film. In between the action bits, there are long stretches where, boringly, nothing really goes on. What a wasted opportunity. The DeMarco crime family should have sent more goons after Burt and he can dispatch them in his own inimitable way. But no, it’s him and Peter MacNicol talking about life. Can’t they do that on their own time? There isn’t even one car chase for crying out loud. 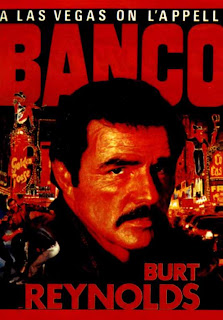 On the positive side, there is a lot of pre-political correctness dialogue, and the soundtrack is drenched in classic sax (just like the Wings Hauser Las Vegas movie Living To Die, 1990). And, of course, Howard Hesseman is involved. And if you can’t get enough of the magnetism of Burt Reynolds (not caring), Heat should satisfy that need. Keep in mind this was the BEGINNING of his Not Caring period. Compared to later outings, he still had a little bit of “care” left in him.

Heat is not exactly a must see, but in the action sequences, we actually rewound a few parts. So if you find it cheap somewhere (very cheap) get it. Otherwise, eh.

Comeuppance Review by: Brett and Ty
Posted by Ty at 7.2.12

Yeah, the drama wasn't so succesful, but the finale was pretty entertaining, and it's at least more watchable then say Physical Evidence, which was even more boring(granted that one had a car chase, but it wasn't a very good one)

I would however recommend that you check Rent-A-Cop, I always that was one of Reynolds more underrated films.

We totally agree with you. Will definitely check out Rent-A-Cop soon. Thanks for the recommendation.

Oh man, I'm right there with you on this one. This was absolutely dreadful for me. You're right, this was the beginning of the "not caring" phase of his career. I couldn't believe that this came out only a year after Stick, yet he looks so much older and so much more out of shape than in Stick. And the director clearly couldn't handle the material. That first fight scene when he plays a pimp or something in that hotel room with those big bodyguards? Hilariously priceless. Horrible editing. Horrible directing. Sums up the movie as a whole for me.

Haha, that pimp scene was hilariously stupid. If only the whole movie was like that! There is a lot of boring filler in this.

Haven't seen this yet, but I heard Brian De Palma is remaking it with Jason Statham in the Burt role. How awesome is that?

Good team-up! Would definitely watch a remake with Statham. The Mechanic was a solid remake too.

I have the book this was based on. Soon as I get the chance to read it, I'll put my two cents in about it.

Saw this on VHS when it came out and the only thing I remember is that Burt's hairpiece changed from scene to scene, hilarious!

This movie is a classic (can't understand the hate?)
It was never written as a action movie (it's based on a William Goldman novel) But (as with 'Stick' before it) studios demmanded re-edits (leading to Burt actually punching the director)

I find the (sparse) action a bonus, and not a hindrance. I thought the action was great(then again I'm a repentant 'Burt' junkie) but I didn't need it.

As others have mentioned, the scene with Burt dressed up in the pimp clothes is very funny. And the Burt-Fu (replete with freeze frames, zooms and bionic man sound effects) are indeed the icing on the cake (Notice that Burt is wearing some bitching stacked 'platform' heels, during this sequence) And that jacket is vintage 'Seagal-Glimmer Man' quality.
I found Burt's performance to be more 'laconic' than 'not caring'(adding nicely to the movies theme of a world-weary tough-guy yearning to hang up his gloves, but hindered by his addictions) I think Reynolds stop caring around the time of COP & A HALF (in my opinion)

And what other movie can you see eynolds taunting someone else about wearing a toupee?

Burt does indeed look different in the final hospital sequence, which looks like a (much later) re-shoot to me? (**SPOILERS** Cyrus actually dies at the end) The UK vhs release retains this slightly downbeat ending.

SHARKEY'S MACHINE, HEAT and STICK are my all time Burt top 3 movies.

Thanks for your valuable insight once again, Lee!

The toupee and ridiculous fight scenes were really funny. But now I'm interested in seeing the downbeat UK version.

The extra stuff is the scene at the hospital near the end. You can tell it's been filmed much later (and even on, what appears to be, different film stock?) The UK version ends with Reynolds killing the mob boss, then it cuts straight to him on a boat in Venice. Until I got the US DVD about 7 years ago, I'd always assumed that MacNichols character died.
I'm not looking forward to the Statham remake (although I love De Palma)

Remakes are unnecessary...but Statham might do a decent job...but it is hard to top Burt!

I'll gladly watch anything with Statham in it, there hasn't been a single one of his films that i've hated(not even "Turn It Up") and i'm especially excited to see his newest film "Safe" this April.

Same here! Can't wait to see Safe. Should be a blast! Also thought he wasn't bad in Turn It Up...He was the best part of that movie.

"Can't they do that on their own time?" Great line, sums up so many overly talkative movies. They really need to learn to get that crap taken care of on their own time and give us the explosions, gunfire, and fist fights we came for. And I can only imagine what this film would've looked like had Altman directed.

If it was directed by Altman, I bet it would have been even better and maybe a 80s classic.