Master Gunnery Sergeant Thomas Beckett is “The Best”. The best at being a sniper, that is. He’s a hardcore, dedicated Marine who gives his all to his craft. He’s truly turned sniping into an art. Beckett is stationed in the jungles of Panama, and his mission is to eliminate a rebel leader, as well as his drug lord financier. Beckett is infamous because his “spotters” all end up getting shot, but his latest one is one Richard Miller (Zane), a government flack who was an Olympic marksman. Miller is green and Beckett has to show him the ropes. But after spending some time in the jungle, Miller gets cocky and he challenges Beckett often.  Not only do they still have to execute their mission, but there is also an evil sniper trying to out-snipe them, and he may or may not be a traitorous American. Will Beckett and Miller live to snipe another day?

While, plotwise, Sniper may be a fairly standard “El Presidente” movie, it can also probably stand as the ultimate sniper movie. That may seem obvious, but this movie goes into many of the ins and outs of the sniper’s creed. It can best be boiled down to one line: “One shot. One kill. No exceptions.” The pace of the movie follows suit, as Beckett explains there is a lot of waiting and setup before he can take his shot. The movie mirrors that. But there’s plenty of jungle-based machine gun shooting as well. Sniper was a Hollywood movie that was released to theaters, so it has high production values and a somewhat classy feel. 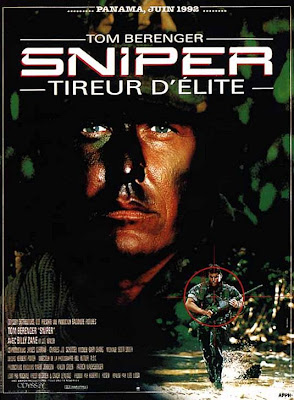 Director Llosa also directed Hour of the Assassin (1987), which is pretty similar to this. But while that one starred Erik Estrada, now we have Berenger and Zane. Berenger is completely believable as Beckett. He’s really a great actor, you never once doubt that Beckett is authentic. He carries not only this movie, but the next two sequels as well. Why exactly there are a total of FOUR Sniper movies to date is unknown, but like Steve Guttenberg after the first three Police Academy movies, he realized it was time to bail. Billy Zane is Miller, the guy who has no confirmed kills but is still trying to assert his authority and so is in something of a moral quandary. He does a good job at that as well. J.T. Walsh was in one scene. We would have liked to have seen more Walsh. 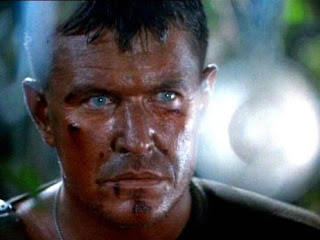 And while Sniper could have been a lot dumber, it’s really not that dumb. Thankfully, there are no stupid jokes and corny humor either. We really appreciated that. This easily could have devolved into a Mercenary 2 (1999)-type slog. On the technical front, there are the high tech bullet and reticule effects which were perfect for their time and predate The Matrix (1999). They seemed designed specifically for teenagers of the 90’s to go “Woah.” in true Joey Lawrence fashion. Speaking of the 90’s, Beckett speaks about “feeling the rush”, which is a very 90’s thing to say. Clearly, killing someone from a long distance makes you thirsty for Mountain Dew. Note that Beckett does not talk about “feeling the rush” in the sequels, which were filmed in the 2000’s.

Of the three Sniper movies we’ve seen, this first one is the best one. If jungle action floats your boat, you could sure do a lot worse than this initial Sniper offering.

I saw this one in the theatre during its original run and quite enjoyed it. I really love this part of your review:

"They seemed designed specifically for teenagers of the 90’s to go “Woah.” in true Joey Lawrence fashion. Speaking of the 90’s, Beckett speaks about “feeling the rush”, which is a very 90’s thing to say. Clearly, killing someone from a long distance makes you thirsty for Mountain Dew. Note that Beckett does not talk about “feeling the rush” in the sequels, which were filmed in the 2000’s."

I was eighteen and did go "woah," but I think mine was more like Keanu than Joey's.:) It's amazing how those bullet-time effects became so influential on subsequent cinema and video games that we don't even think about them anymore. If Llosa could have copyrighted that technique, then he would be a trillionaire, today.

Fun stuff, guys, and hope all is well.

Thanks! We appreciate that you enjoyed the "rush" bit.


Also that is really cool you saw this in the theater!

What makes this film even more great is that it's sort of based on a true story, same guy named Carlos Hathcock really did kill an enemy sniper by shooting a bullet through the scope. As for Mercenary 2, it was OK, but I do remember cringing at Gruner's character being afraid of horses(seriously? I couldn't tell if that was supposed to be funny or not)

That is really interesting this is based on a true story!

We thought Mercenary 2 was a tough sit, it needed less comedy and more action. A review is coming soon!

I always wanted to screen this in the Movie Bar when it was open but we never got round to it. Fantastic! Cool review too Ty.

Oh Sniper is a classic. I've got the sequels to watch as well, though I saw, reviewed and enjoyed the latest one.

I too saw this in the theater. I remember feeling it was a bit middle of the road then, but I've come to appreciate it more in recent years. (I think that mostly had to do with the fact that me and my friends went to the theater to see Children of the Corn 2, but the paper had the wrong times listed so we were forced to see this instead.)

Explosive Action: The sequels are not too bad. Still haven't watched Sniper: Reloaded yet.

Mitch: You have a great memory. That is very cool that saw this in the theater. Beckett on the big screen!

Really enjoy this film - like how they keep the tension going throughout. The bit where they attack El Presidente's country house is great.

Check out the latest one - Sniper: Reloaded - it's actually surprisingly good for a 3rd sequel.

Word of warning: if you live in the UK don't buy the Region 2 DVD buy the Region 1. For some reason, they've re-edited a lot of key sequences from the film and chopped off the ending!

That is really odd about the UK DVD! I wonder why they chopped out certain sequences?

Also will have to check out Sniper: Reloaded soon!

Nice review...this is a must-see, as far as sniper movies go, no question. Berenger was great in this...Billy Zane..a little annoying, but a great actor as well.
I just posted a pic of a sniper cardboard standee over at my blog.
A friend still has a massive collection of cardboard standees and banners, we checked on all of his stuff just recently.

Thanks! Berenger was at his best. Zane was just ok. It definitely needed more J.T. Walsh...he was only in one scene! Also Shooter with Mark Whalberg was a pretty fun sniper flick.

That is really cool about the standee! Will check that out on your site.

There's also a Hong Kong film called Sniper which was dare I say it, even better then this film!

Sounds good! Will have to check that out. Thanks for the recommendation!

Im looking forward to watching this tonight, bought the DVD in a thrift store and haven't seen it since the VHS era. Well done on a great website that understands the art of this kind of cinema.