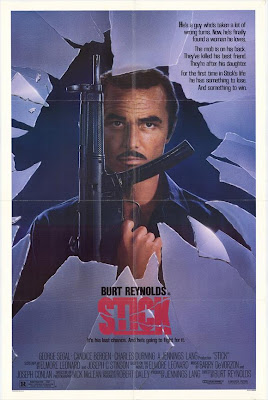 Burt Reynolds plays Ernest “Stick” Stickley. We should just stop the plot description right there. But we’ll go on - Stick is an ex-con who gets out of jail and ends up working as a chauffeur for a mega-wealthy dude (Segal) and living at his mansion in the Miami area. While he’s trying to romance Kyle (Bergen) as well as forge a relationship with his daughter after his prison stay, nefarious drug dealers and gangsters are after Stick, led by the flamboyant Chucky (Durning) and his remorseless hit man Moke (Robinson). Will Stick Stickley stick to the law-abiding side of life?

This was the last movie Burt made before his Not Caring period (discussed in our Heat review). Because he still cared (after all, he directed the movie and co-wrote the theme song “I Don’t Think I’m Ready For You” sung by Anne Murray), his demeanor is actually pleasant to watch and he seems to be enjoying himself reasonably enough, by Burt standards. He gets many personas in the movie - from the “Indiana Burt” of the beginning with his bomber jacket, fedora and beard to the “James Bond Burt” of later on, with “Casual Burt” in the middle, complete with pink Members Only jacket. (We’re not entirely convinced that it isn’t a woman’s jacket). 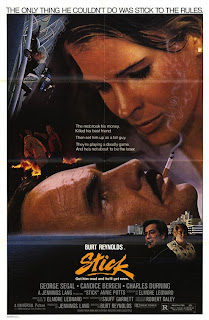 But the real star of the show is Charles Durning as Chucky. In a role like no other we’ve seen Durning interpret, he plays a Rip Taylor-like villain complete with loud shirts and bizarre makeup. Durning steals the movie, but George Segal gives him a run for his money with his big, boisterous role as Barry. 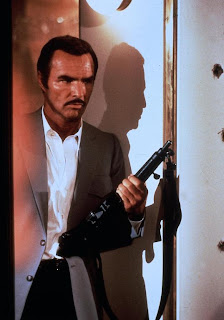 While Burt is as laconic as ever in front of the camera, he does a good, competent job behind it, clearly influenced by the popularity of Miami Vice. But the movie is a lengthy production with a very mainstream look. It needed more grit. It also should have been shorter and snappier. Elmore Leonard usually does good work but 52 Pick-Up (1986) remains his best.

Comeuppance Review by: Ty and Brett
Posted by Ty at 6.2.12

Great review. Stick is playing this week on Encore. I'll have to DVR it. I love me some Burt. And I'd kill (OK... maim) to have that Stick poster hanging on my wall.

Thanks! It's no Malone, but Stick is definitely not bad.

Haha, that poster is pretty cool!

Good review, the book is real good (as most Elmore Leonard books tend to be).

Thanks! Totally agree about Elmore too. Excellent writer.

Also I had no clue this film was based on a book.

Up there in my top three alongside SHARKEY'S MACHINE and HEAT (I thought he was great in that movie...although he did punch the director?)

Love the Anne Murray song also. Got it on my MP3 player (and listen to it most days....despite being into hardcore gangster rap)

There's a dutch DVD of STICK which I got off E-bay (which is very nice) But I do wish Universal would release the longer (TV version, I think?) of this much overlooked classic.

BTW, for years, I've always told friends and family that Burt is the only guy that can pull off 'pink' clothing.

Venom: We reviewed Raven and it is a very silly movie. This is his beginning of goofy Burt movies.

Lee: Thanks for the info. Is the Dutch DVD uncut? Has the TV version ever been released? That's awesome that you have the Anne Murray song on your MP3 player. We'll have to download it soon.

Charles Durning is no slouch in the silly shirt department (in this movie anyway).

I love this film and this is my favorite Burt flick. It has it's problems, but of the 3 "big budget" Burt directed/starring films (Gator, Sharky's Machine, Stick), I like this one the best. It could have been shorter and maybe have some more action, but he's just so awesome in this and I dug his directing style too. These are the kinds of films I wish he had made more of. And you're right, Durning was something else. lol.

This is decent, but nothing compared to 'Sharky's Machine.' That was Burt's 'Dirty Harry' in my opinion.

RobotGEEK: Charles Durning was really ridiculous in this, but he added to the fun. Gator and Sharkey's Machine are a blast too!

Force Field: Will definitely re-watch Sharkey's Machine soon. Saw it a long time ago and enjoyed it.

As far as I know the Dutch R2 DVD of Stick was uncut. I mentioned buying it last year (on my 'then' Happy Birthday Burt post) Which (incidentally) is coming up again on the 11th of Febuary (Happy Birthday again Bandit!)

The Tv version (so I'm led to believe) is the earlier 1984 cut (before Universal demanded re-shoots) as apparently it was more faithful to the novel (and eliminated the 'daughter' character) Burt re-shot a few more action scenes, to market it as an 'Action' film (which is the 1985 release, we all know and love) resulting in Elmore falling out with Reynolds, over "giving in" to the studio.

Thanks for all your excellent info on Stick! You are a Burt expert!

Great stuff, I haven't seen this one in forever, like a lot of the Burt Reynolds flicks you picked. I'll have to check it out.