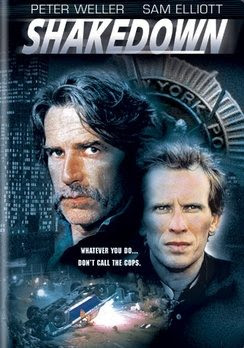 When drug dealer Michael Jones (Brooks) shoots a corrupt cop in New York’s Central Park one night, it falls on idealistic, Jimi Hendrix-loving attorney Roland Dalton (Weller) to defend him. But things get far more complicated when Dalton must team up with an undercover, unorthodox cop, Richie Marks (Elliott) to get to the truth behind all the corrupt cops, drug dealers, thugs and goons. And in a plot device later used, interestingly enough, in Night Of The Wilding (1990), the prosecutor on the Jones case is Roland’s former girlfriend.

What’s great about Shakedown is that it is not mindless. It has real characters in realistic settings. You grow to appreciate both Dalton and Marks. It’s a legal drama but it is filled with action as well - the legal side represented by Peter Weller and the action side by Sam Elliott, who should have appeared in more movies like this. Weller makes plenty of funny faces along with his more normal interpretation of Dalton, the baby boomer attorney.  Another name, Antonio Fargas shows up,  but the fairly fast pace doesn’t allow for him to stay around long.  Richard Brooks would later be on the other side of the law on Law & Order. 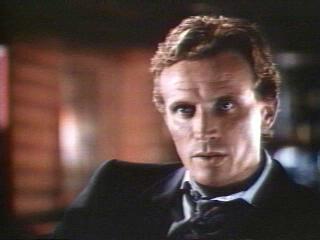 Another noteworthy aspect of this movie is its excellent New York City locations. A lot of  scenes were filmed on the famed 42nd street, right before the city was cleaned up. There are plenty of movie marquees on show, everything from X-rated material to movies like The Hidden (1987) and Fatal Beauty, 1987 (also starring Elliott). You can see the famous Lyric theater, among others. As part of Marks’ undercover work, he hides out in a theater watching the Glickenhaus movie The Soldier, 1982 (which you can also see posters for in the lobby). It’s great to see all this stuff. We’re very glad it was preserved here, intentionally or not. 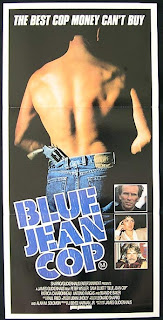 The seamy, New York, 80’s atmosphere, along with the quality stunts, largely good acting combined with a story about adults (no stupid kids are involved) puts Shakedown way above the pack.

Featuring the tune “Lookin’ For Love” by Nikki Ryder, Shakedown is well worth seeking out.

Also check out the write-ups of Shakedown by: Direct To Video Connoisseur and Explosive Action!

Holy crow, where did you dig this one up? I haven't seen this movie in YEARS! I'm a big Peter Weller fan. I wanted to grow up to be just like him: intense, magnetic, and sardonic! Instead I ended up obese, cowardly, and flatulent. Oh well!

James Glickenhaus, Peter Weller, and Sam Elliot!? WHY HAVEN'T I HEARD OF THIS YET!!

I need to see this. Thank you for the review!

Richard Of DM: Haha, Peter Weller rules, also no one can top his performance in Robocop! Definitely interested in your opinion on this.

Mr. Gable: Your Welcome! We know you will love it.

Yeah this film was pretty awesome, though I'll admit I didn't really pay much attention to the legal stuff.

Fatal beauty is a pretty good film in it's own right, I tihnk you'd enjoy it.

Peter Weller and Sam Elliot should have made more action movies together!

Will have to check out Fatal Beauty.

Saw this at the theatre way back when. Really enjoyed it.

That is really cool you saw this in the theatre...the good old days! It still holds up today.

Sam Elliot was great in 'Extreme Justice' with Lou Diamond Phillips. Classic crooked cop flick! If any film deserves a review here it's that.

Have seeon this more than once...but the last viewing mustve been years ago...Imabout to tackle "Of unknown Origin", also with Weller..
I like the title BLUE JEAN COP...just something cool about that...shakedown reminds me of that song from Beverly Hills Cop 2!

Force Field: I think you are mixing up Sam Elliot with Scott Glenn...Extreme Justice is a great film though. We have a review coming soon for Scott Glenn week!

Hellford667: Haha, totally forgot about that song from Beverly Hills Cop 2...best part of that movie.

You're right! I don't know what I was thinking there. I was just watching the bloody film last week!

Haha, no problem. They are easy to mix up.

Ahh yes such a great film. My very first review too!

Totally agree! This was a great choice for a 1st review. Really shows what kind of movies you review!

love this flick. great action action scenes and Weller and Elliot together in the same film: what's not to like....

It's true, they're a good team.

Big Pete Weller fan myself, and I remember enjoying this one quite a bit back in the day. Props to Sam Elliott as well....the epitome of cool old guy!

Can't agree more! Sam Elliot is at his best in this. Same with Road House!

Thanks for the mention, I enjoyed this one a lot too. Best for me was Weller's argument with the prosecutor about their past romance "Is this going to be some kind of female territorial doo wop?" and the look on his face as his cab is carried by the craned onto the courthouse steps. Great stuff.

No problem about the link! Haha, Peter Weller was great in this. Loved that scene with the crane too.

I first saw Shakedown more than 20 years ago when it first came out on video and still remember that roller coaster finale. Great stuff and great choice for review.

Thanks! This is an 80s classic. Sam Elliot and Peter Weller should have made a sequel or another movie together!

I just watched this for the first time and despite being a decent watch, the scene where Elliot straddles the landing gear of the plane above New York City and almost hits the WTC among other things was just so ludicrous and out of nowhere I was genuinely stunned. It didn't know if it wanted to be a serious court room drama or a preposterous action film with sequences straight out of Grand Theft Auto.

It is like two different movies. Loved the Sam Elliot action scenes.