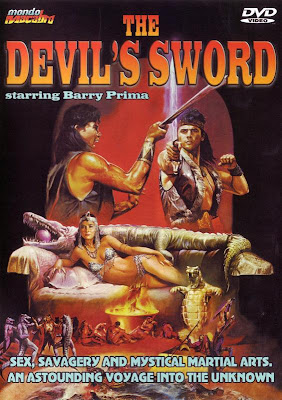 When a mystical, magical and powerful sword is forged from a meteor that crashes to earth, everyone wants to get their hands on it. That includes the evil Banyunjaga (Bangun), as well as a host of other baddies. Luckily, the brave hero Mandala (Prima) is going to try to make sure the sword falls into the right hands. Master Abirama trained both men, but one chose the path of good, and the other evil. Meanwhile, underneath the earth, the Crocodile Queen reigns. She abducts men from the surface world to satisfy her urges. When she spirits away the innocent Sanjaya, his wife, Princess Retaloca hires Mandala to rescue him. Many fights and battles ensue...who will take possession of the DEVIL’S SWORD?

Here we have a wild and wacky Indonesian adventure. It’s impossible not to love the spirit of downright weirdness and the homemade special effects. Sure, the dubbing is preposterous and the many fight scenes are ridiculous, but that’s what is so enjoyable about a gem like this. It shows that every country in the world loves action movies, and what makes this movie so special is that it displays its own ethnic quirkiness and charm onto what they produced. Nowhere else in the world could have produced something like The Devil’s Sword. 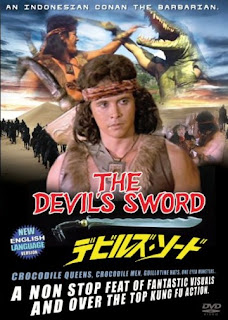 Barry Prima deserves more visibility as an action star. In that corner of the globe, he was the man. Some of his movies came out on VHS in the golden age in various countries so people do know who he is. But more of the movie viewing public should be aware of him. 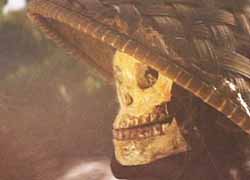 Seemingly inspired by myths and legends, there are some fascinating sets and great costumes. The visuals are great thanks to the organic special effects. The whole thing is exotic, inventive and fun. It’s very entertaining. You gotta give it up to Mondo Macabro for putting this out. Us westerners (or anyone for that matter) are lucky to see this movie. Rapi Films productions never really made it to the U.S. in any significant way back in the 80’s. Thanks to Mondo Macabro and other DVD labels, the world is truly getting smaller and we can see movies we never thought possible.

Beware of crocodile men and stone giants and see The Devil’s Sword.

Thanks for the plug! This started off like gangbusters, but the last hour just couldn't compare to the awesome first half.

Great review! I have this one laying around but havent had the opportunity to watch it yet but now I really look forward to do so!

Ohhh yeah, this one is pure gold. It's been featured at Kung Fu Grindhouse in the past and we're talking about resurrecting it for our anniversary show. A personal favorite, thanks for bringing it up again.

The Video Vacuum: Your Welcome! We agree. The beginning was amazing, but it did turn a bit sluggish towards the end.

Jesper: Thanks! Looking forward to your opinion. It is a very wacky movie!

The Goodkind: No Problem! It is a blast. That is cool you might use it again for your anniversary show!

You guys on a fantasy kick now huh? I love it! I personally volunteer to help satisfy the urges of the Crocodile Queen!

I take it you're a fan of The Devil's Sword....if there were more fans of this movie like us, the world would be a better place!