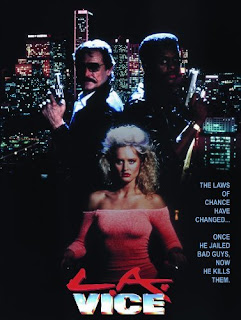 
Chance (LHJ) is a Los Angeles detective who shoots first and asks questions later. When the daughter of a wealthy newspaper magnate named Johnson (Angel) is kidnapped by mobsters who demand millions for her return, the FBI - and Johnson himself - call Chance in on the case. Requesting he have a partner for this operation, he turns to the “only man he can trust” - his now retired Captain, Joe Wilkes (Smith). Wilkes now lives a quiet, peaceful life in a very rural area. He has a Native American friend named Bear (Coviare), and all is right with the world - until Chance shows up asking for his help.


Shortly thereafter, tired of all the bureaucratic red tape in the LAPD, Chance quits in anger. They were really cramping his style. Johnson hires him on a private basis - so now Chance is rogue and can do whatever he wants. Will his renegade ways land him in hot water? Or will he, perChance, win the day?


Here we have a fairly early PM outing, with all the familiar names behind the camera we all know and love. PM improved on many levels later in its career - but L.A. Vice is like an early album by a band that later got vastly more sophisticated, or even early seasons of The Simpsons or South Park - by later standards they seem primitive, but they were just starting out and had the drive to succeed, and luckily no one pulled the plug so they were allowed to develop and get better.  Sure, this movie has a rock-bottom budget look to it, but it’s more entertaining than many higher-budget productions. 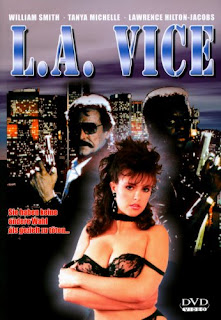 We always love seeing LHJ, and he’s great as the cooler-than-cool cop with tons of smart-aleck comments. He’s too radical for red tape, too badass for bureaucracy, and he lets his marksmanship do the talking. He truly is a rockin’ dude with a bad attitude. We also love William Smith, and the two guys make an interesting pair - Smith is gruff and gravelly (to the point of comical incoherence), while LHJ is slick and streetwise. Regardless of Smith’s occasional unintelligibility, he has a great screen presence and it’s always a treat to watch him.


Jastereo Coviare, who appears in pretty much all the LHJ PM’s (that’s right, Chance comes back), plays Bear with quiet aplomb (as opposed to Quietfire, 1991, we suppose). Interestingly, when Chance teams up with Bear, the whole “city cop meets rural Native American” thing is strongly reminiscent of the Lou Diamond Phillips film Renegades (1989), which came out in the same year - the magical year of 1989. LHJ and LDP should be in a movie together as cops on the edge. It could be called “Initial Danger” or something to that effect. And one more note about the cast: there’s a cop on Chance’s “team” with amazing hair. You’ll know him when you see him. We’ve seen some awesome hair over the years but...wow.


So, while L.A. Vice does fall prey to some of the standard low-budget pitfalls, this minor issue is more than corrected by the cast, and the PM team, who turn out an entertaining piece here.

Any film with L.A. in the title is usually pretty entertaining, such as Escape from L.A., L.A. Heat, L.A. Crackdown 1 and 2, L.A. Bounty, East L.A. Warriors. The best film in the chance series for me is Angels Of The City, though this one comes at a close second.

We haven't seen Angels Of The City and L.A. Heat. We are working at tracking them down. LHJ is always worth-watching!

Wow, I may just have to seek this one out if only because the pairing of LHJ and William Smith sounds so awesome.

I think you will enjoy it. William Smith and LHJ make a good team.

All LA cops shoot fire and ask questions later...many cos they work alone and therefore would only be talking to themselves. Love the recommendation, haven't seen this.

Haha true. All cool renegade cops do that.

You should review Renegades sometimes, that's one of the best buddy cop films out there IMO

We will definitely watch\review that in the future. Saw it a long time ago and it was entertaining.

I need to see this and Angels Of The City. Then I'll have complete collection of these films featuring LHJ. Yeah L.A. Heat totally rocks as does Chance.

Happy to know that L.A. Heat is worth watching.