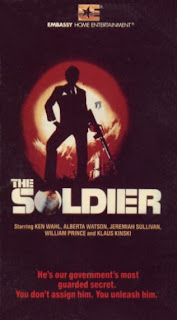 Evil Russians steal some nukes, plant them in an oil field, and threaten to detonate them, thereby contaminating a large part of the world’s oil supply. For some unexplained reason, they are anti-Israel bigots who want to move the Israelis off the West Bank. Sadly, The President (that’s actually his credited character name) (Prince) is all too willing to comply. But there’s one more ace up the USA’s sleeve: The Soldier (Wahl). He’s a highly-trained agent who controls a super-secretive and elite unit, and he’s working with the Israelis to save the world.

This movie has a killer opening sequence that really pulls you in. Its themes of terrorism and anti-Semitism (even from the highest levels of government) are, disturbingly, quite relevant and even prescient for today. The Soldier, for all it’s 80’s-style anti-commie plot threads (not that those are a bad thing in any way), was ahead of its time. Plus it has an unbeatable combination of Ken Wahl and Steve James fighting the baddies. So for that alone The Soldier is worth seeking out. 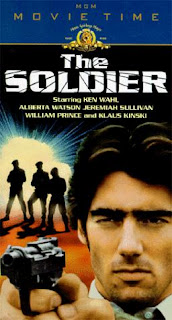 Of course, there is some top-notch stuntwork as well. The ski chase sequence is a movie highlight, and director Glickenhaus must have loved it so much, he also included it in his movie Shakedown (1988). Sam Elliott is watching it in the movie theater. It’s truly Glickenhaus on Glickenhaus. And it’s top-notch Glickenhaus. He’s only directed eight movies, and out of those, The Soldier stands out. He’s adept at action sequences, as amply proven here.

Wahl is cool, and he’s as cool here as we’ve ever seen him. He should have done more projects like this. His sweaters are very stylish and we liked his attitude. As for Klaus Kinski, one of the most underrated actors of all time, he does about a five minute cameo and has no spoken dialogue. Hmmmm...talk about a paycheck role. The Soldier could have been improved if Kinski was the main bad guy and Wahl had to face off against him. That would have been awesome. Chalk that up to a missed opportunity.

Loaded with three of the best things you can ask for in a movie like this: top-quality stunts, over-the-top action violence and 80’s atmosphere, these elements overcome some plot weaknesses. Additionally, the soundtrack by Tangerine Dream rules.

You should definitely enlist The Soldier into your collection.

Wahl was also really good in "The Taking Of Beverly Hills" which was I believe, the very first Die Hard rip-off, and it is indeed surprising how relevant this films themes are.

Good stuff, another one I have yet to see.

Venom: Always wanted to see that. Will have to check that out soon. Love a good Die Hard ripoff.

Ed: Thanks! I think you will enjoy it!

I have seen this on Tv and VHS ages ago, but I do remember it was anything but rubbish. I may give it a spin again in the near future...

Saw this a long time ago and didn't like it either, but when we watched it again years later, it somehow became better! Haha.

I mean I liked it...or does "anything but rubbish" mean bad? I thought it meant "good" , beacuse it is anything but....

The Soldier is not too bad, could've been better with if Kinski actually spoke!

This is one that's been on my radar for years. I need to finally make it happen.

Cool! Looking forward to your take on this. Steve James has a nice role in it too.

I've been eyeing this off for ages, ever since I watched Shakedown and saw it advertised at a cinema in the movie, haha. Really should pull the trigger on picking it up.

Haha, that was one of the cooler parts of Shakedown!