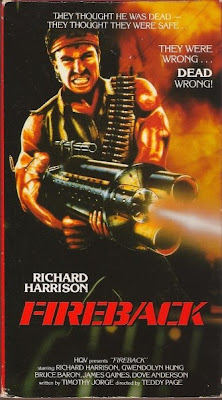 
Jack Kaplan (Harrison) was a weapons specialist in Vietnam who invented the most awesome gun ever - a gigantic combination grenade launcher/bazooka/missile launcher that’s loaded with other surprises and goodies.  One day he’s showing off his prize possession, and the next he is imprisoned in a P.O.W. camp. When he is released, he finds his beloved wife Diane (Milhench) has been kidnapped. For the remainder of the film’s running time, Jack runs around from place to place beating people up, and avoiding grievous bodily harm by many baddies, while trying to find the whereabouts of his wife. Additionally, the police are after him, and Jack must avoid them as well. The Police Chief (Monty)  - (that‘s his credited name in the film) is spearheading that operation. Will Jack find his wife, and while being shot at every day, will he...FIRE BACK?

A Teddy Page movie shot in the Philippines, starring Richard Harrison and Mike Monty...if you rent or buy FIREBACK, you know what you’re in for: exploding huts and guard towers, oceans of mindless shooting, hilariously hilarious dubbing, and a ton of absurdity. This time around, the exploding hut scenario is married to a revenge plot, so that was a cool twist.  Ann Milhench, who plays Jack’s wife, was in the horrendous Sloane (1984), as well as Nine Deaths of the Ninja (1985). Who knew?

As far as Jack’s super-gun, displayed prominently on the box art, it’s like one of those toys you might have had as a kid - that combination of guns that they would never make today. But at least it’s actually in the movie, however brief. Also as part of Jack’s revenge, he makes a souped-up car version of his old weapon (if that makes any sense). And watch out for the bad guy with the golden claw, as well as Harrison dressing up as a ninja for no explainable reason. I guess he can’t get enough of doing that. But the relative immaturity of Fireback is one of its more endearing qualities. 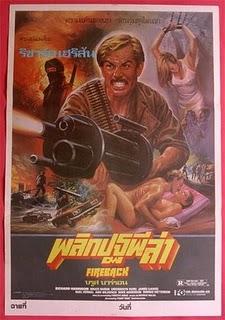 The many flashbacks and the “lost love” scenario, among other off-kilter elements, give Fireback a somewhat Italian feel, although no Italians were involved. The score is so booming and loud, it gets grating at times, and the dubbing, while entertaining in its own right, contains those voices you’ve heard many times before. Also, after the climax, there is a very stupid and unnecessary on-screen addendum telling us what happened to Jack Kaplan. Why they thought to add this, no one can say. Although Jack’s post-Fireback adventures are still a mystery to us all, so it didn’t even really help.

If you can’t get enough Filipino insanity, Fireback will fit the bill.

Sounds fairly decent, I really have to get cracking on that 50 movie pack I got from Amazon last week. There's some prime action cheese on it.

Cool! What other movies are on that set?

What was the name of that movie pack?

We reviewed Operation Nam and The Last Mercenary (AKA Rolf) and there will be reviews forthcoming for every other movie on the Grindhouse Mercs box set!

Get the sense that they came up with the cool looking gun first, then wrote the script.

Haha, you are probably right. The gun is the best part of the movie!

I've got a fancy Greek VHS of this one I'm yet to watch. Forgot that it was Teddy Page of Phantom Soldiers fame! I'll have to get to it soon. And venom be wary of that ten pack, they are all VHS transfers and from some reports they aren't even good ones, complete with tape rolls!

Cool! Hopefully you will get to watch it soon. Tedd Page is always entertaining!

Based on all the points you hit on this, even the dressing up as a ninja for no apparent reason, this one sounds like a blast. I gotta check this out!

Great! Hopefully you can watch it soon.

I need to see this so bad. Great stuff!

Thanks! I think you will enjoy it.