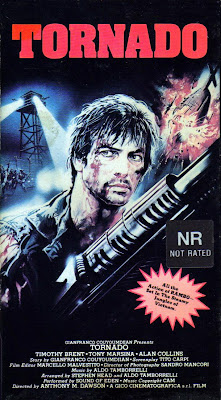 AKA: The Last Blood


Set during the final days of the Vietnam war, Tornado is the tale of one Sgt. Sal Maggio (Prete), a man embittered by war. Compounding the situation is the hard-ass (to the point of being sinister) Captain Harlow (Marsina). The two men are always at odds, and their conflicts continue to escalate, with a court-martial looming for Maggio. When Harlow’s decisions leave people dead in their wake, Maggio doesn’t take kindly to that. But then he’s captured by enemy forces and tortured. Harlow decides Maggio is a deserter and orders his men to shoot on sight if they see him. Meanwhile, Maggio escapes from his imprisonment and takes revenge on all of those who wronged him.

If it’s anyone who truly understands the Vietnam experience, it’s the Italians. we’re being facetious, but director Antonio Margheriti is amazing and his killer body of work speaks for itself. While his The Last Hunter (1980) is superior to this, Tornado is a decent, watchable Exploding-Hut jungle movie. There are slo-mo runs from explosions (and quality explosions at that),  tons of southeast Asians with those bamboo cylindrical hats bite the dust, stock footage from the aforementioned The Last Hunter, and naturally there’s plenty of shooting, helicopters, and the prerequisite torture sequence. None of it is really new, but it’s not bad. 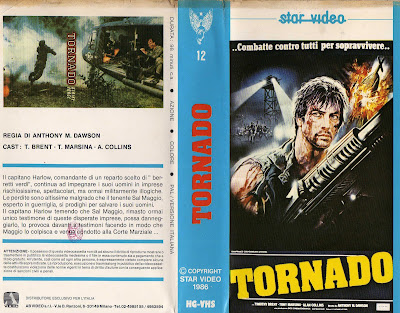 There’s the time-honored disco scene, which we always love seeing, and because this is an Italian production, they’re going to add a bit of their trademark gore to some of the violent scenes. Here, it’s not over the top however. This movie would seem to be highly influenced by Rambo: First Blood Part II (1985), if it didn’t predate it! But its First Blood  (1982) inspirations are made explicitly clear on the movie’s alternate title: The Last Blood. As if that wasn’t enough, check out the burst on the lower right of the box art: “All the action of Rambo - set in the steamy jungles of Vietnam.” Such is the gigantic influence Stallone left on the action genre.

The year following Tornado, Tony Marsina would appear as the title character in Rolf (1984), extending his action cred. Giancarlo Prete (here as Timothy Brent) as Maggio is enjoyable to watch as the unshaven soldier with the big insubordinate streak. It’s pretty surprising his character wasn’t named “Stryker”. Luciano Pigozzi (here as Alan Collins) is an actor who’s been in pretty much every Italian movie...we think it’s been said before, but he’s like the Italian Vic Diaz. Here he gets a reasonably good role as the Hemingway-like war reporter named Freeman.

Released on VHS in the U.S. on the great Lightning label, Tornado features some memorable music, notably the end-credits tune “Holdin’ On” by Chris J. King.  It’s a GOOD movie - not bad, not great - and it lacks many distinguishing characteristics. Thanks to its director and cast, it’s capably handled and rarely boring, but needed something to set it apart.

I've seen a few Margheriti films, and the man certainly knows how to direct an action sequence.

This is going to sound very geeky, but I've always been very impressed with his model work. It always looks very realistic.

Also, can I ask - do any helicopters explode in this. Margheriti has a very good track record in this area, and this film could make him even more of a legend in the sub-genre of exploding helicopter movies.

Jesper: It is pretty decent Vietnam flick. The cover is really cool too.

Exploding Helicopter: It is definitely not geeky to like his model work. It is always very interesting. Unfortunately, there are no exploding helicopters in this. Just huts!

I HAVE to see this! Looks ace. The Last Hunter is indeed awesome....

It is a fun action flick! Looking forward to your opinion.

I'm right there with everyone else, I have to see this. Rad cover too! Has it ever gotten a DVD release?

Not sure about the DVD release. Stumbled upon a tape of this a few months ago at a thrift shop. The cover was so cool, i had to buy it! Haha.

Hopefully you can watch it soon!