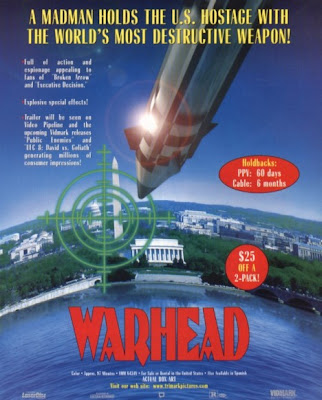 When the diabolical villain Kraft (Lara) takes over a missile silo and threatens to launch an ICBM at Washington, only one man can stop the madness: Jack Tannen (Zagarino), of course. He assembles a team which includes Jessica Evans (Giordano), an MIT-educated scientist. Kraft kidnapped her father and forces him to help him, so Jessica has her own reasons to go on the incredibly dangerous mission to take down Kraft and his army of no-good-niks. Will Jack and Jessica succeed?

In the first part of Warhead, we can tell director Mark Roper, director of Queen’s Messenger (2001) and Marines (2003), among other DTV action outings, was trying to ground his movie in serious, topical themes. Raw news footage of neo-Nazis and references to such events as Ruby Ridge and the Oklahoma City bombing make the viewer think Warhead is going to be a gritty, “ripped from the headlines”-type film. However, once the silly action scenes begin, and Zagarino and Lara show up, we know we’re in for something else entirely. 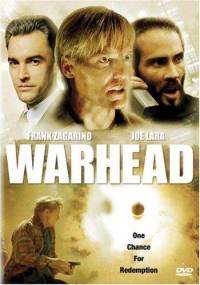 The stars (and possibly some of the same sets) of Armstrong (1998) reunite! Zagarino is sub-Lundgren once again, and the dark haired, dark-featured Lara cast as some kind of white supremacist is just odd. Lara’s forced “quirkiness” falls flat. His “seriousness” is, well...not so serious. And if they were going to make his political views abhorrent, they should have done a better job. His positions on taxes seemed right to us. He’s pretty ahead of his time, that Kraft.

Sure, Armstrong wasn’t the best movie in the world, but it had Richard Lynch. Elizabeth Giordano, who teams up with Zagarino all the time (including Deadly Reckoning, 1998), doesn’t add much to the equation. Because Warhead is filled with the aforementioned silly action scenes, as well as goofy dialogue, and relentless cliches, we can honestly say this movie is stupidity at its most dumb.

But it’s important to remember: you absolutely know that going in. Whoever acts shocked that a Zagarino/Lara vehicle is dumb should probably have their head examined. If you’re in the mood for something very dumb, Warhead fits the bill well, because for most of the movie, it’s just stupidly funny and reasonably entertaining. To expect more - or something else - would be wrong.

Somehow, even the Jetskis with missile launchers attached to them seemed too little too late. That being said, the stuntwork should be applauded, but Nu-Image is really hit or miss. They’re not a powerhouse like PM.

If you feel you might have too many brain cells, check out Warhead.

Also check out Direct To Video Connoisseur's take on Warhead!

I don't think this film was THAT dumb(when I think of dumb action films, stuff like Death Train immediately comes to mind, now that was a hilariously bad film!) certainly not Nu image's finest hour but still pretty decent and I thought it was slightly better then Armstrong. Though i'll admit this film would've worked better if Zagarino and Lara switched roles, Zag might be an OK lead but he's much better at playing villains, and Lara just isn't villain material.

Haha, heard Death Train was pretty bad! Totally agree with you about Zag...he was fun as the villain in Project Shadowchaser.

I wasn't going to watch this but damn you for saying the words jet skis with missile launchers attached. I can't lie, that's a dumb ass game changer for me. Otherwise, great review as always.

Haha! That was the best part of the movie.

Thanks! If you do watch it, definitely get back to us.

Interesting title anyways. Years ago there was rumors of another James Bond film that was going to bring Sean Connery out of retirement and the film was going to be called Warhead at one point. I think it ended up being Never Say Never Again. Worthless trivia for you.

i had fun with this flick. takes itself too seriously but has some cool action. plus jet skis with missle launchers make any and every movie better...

Drive2: If it wasn't for the jetskis with missile launchers attached, this movie would be nothing!

You should check out Mark Roper's other films(except for City Of Fear, that one's pretty mediocre)-Operation Delta Force 3 and 4, Live Wire: Human Timebomb, Orion's Key(AKA Shadowchaser 4), and "Death Deceit And Destiny Aboard The Orient Express"(the long-winded title alone should give you an idea of how laughable it is)

We have seen City Of Fear and Operation Delta Force 4...they were mediocre...especially City Of Fear (Huge Gary Daniels fan)

But will have to check out the other ones. Thanks for the recommendations!