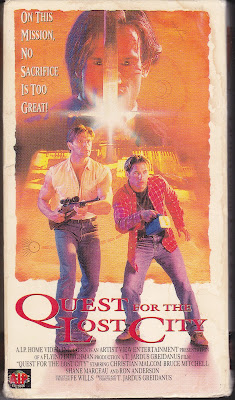 AKA: The Final Sacrifice

Troy McGreggor (Malcolm) is an inquisitive teen who just happens to find a map to a mystical lost city called Ziox while rummaging through some junk in his attic. Unfortunately, an evil cult run by the sinister Satoris (Marceau) want the map to aid them in their quest for world domination. As Troy flees from the cult, he runs into a beer-swilling, chain-smoking, denim-jacketed, mulleted, surly drifter inexplicably named Zap Rowsdower (Mitchell). While Zap is an overweight, embittered alcoholic, Troy is a rail-thin, squeaky-voiced dork. As the original odd couple, they must fend off the cult as they continue their Quest For the Lost City. But what’s the secret behind the “Bowtie” tattoo? Find out tonight!

Originally titled The Final Sacrifice (that’s the title under which it was mocked/popularized by Mystery Science Theater 3000), AIP picked it up and retitled it for its VHS release in the U.S. As part of that, they had to get some models to do some posed shots that have nothing to do with the movie, as often happens with VHS covers of the 80’s/early 90‘s. Those people you see on the cover are certainly not Zap and Troy.

To have the character of Troy be the hero is an interesting choice - he’s unbelievably skinny, wears a nerdy red sweater with a white-collar shirt underneath the entire movie, and his voice sounds like someone puree-ing a dying bird on High. But then to match him with Zap is just...an amazing decision. This guy is Carl from Aqua Teen Hunger Force ten years before Carl from Aqua Teen Hunger Force. He’s such a raving alcoholic, there’s actually a scene where Troy fights the cult by using a box of empty bottles of Zap’s booze he just happens to have in the back of his pickup truck. Some have guns, some have swords, but Zap was on his way to the bottle return to get his five-cent exchanges. Should be enough to put the kibosh on a sinister cult bent on taking over the planet. 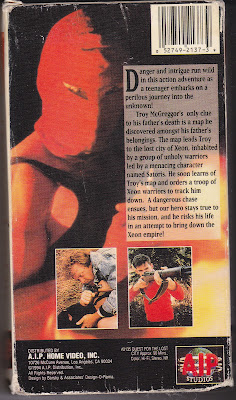 You know Satoris is evil because he has a black trenchcoat. This movie once again is ahead of the curve as it predates the trenchcoat mafia. That being said, there is an entirely separate credit for “Satoris’ Makeup” during the end credits. His minions are guys in black tank tops and executioner hoods. This may remind you of  Bad Taste (1987), where the baddies have blue shirts. But it’s a clever move because the masks allow some repetition of goons without the viewer knowing. But the question remains why director/co-writer Tjardus Greidanus thought audiences would rally behind a big-eared dweeb and a bloated hobo as the movie’s central heroes.

It’s Canadian, it’s low-budget, and it’s somewhat mysterious (that it was edited by “The Flying Dutchman“ adds to the mystique). You could tell they were trying, and they got this movie out there. That’s commendable. It’s more than the people who mean-spiritedly ridicule this movie will ever do (except maybe MST3K).

While it’s not entirely representative of the AIP canon, and we wouldn’t necessarily say to go out of your way to pick this up, if you see it somewhere, like a thrift store or something like that, grab it. It’s a lot of fun with a group of pals.

Comeuppance Review by: Ty and Brett
Posted by Ty at 9.4.12

Thanks for the generous plug. Great review! I agree, the more friends you can get to watch this with the better. And you're absolutely right; this is definitely an atypical kind of AIP flick, but it is a good showcase for the whacked out independent stuff they would occasionally acquire. Like... Elves for instance. Oh... please say you're reviewing Elves this month!

It's amazing the movies AIP finds and releases to the public. Another good example of that is Miami Beach Cops (which will be reviews on April 20th).

On April 16th, our Elves review will be dropped like so many Nazi Elves in the mall.

Got to love Dan Haggerty!

Thanks! Elves is a blast.

One Dan Haggerty film i'd love to see reviewed is Love And Dynamite.

Will love to see that one, can't find it online.