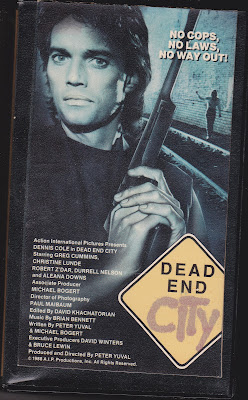 In the near future (?), criminal gangs have run so wild, normal civilians are relocated to shanty towns called “Evac Cities”. The leader of one of the most ruthless gangs, The Ratts, is a guy named Maximum (Z’Dar). In the course of their daily rounds of terrorizing and killing, they run into one man who won’t be intimidated: Jack Murphy (Cummins). He’s a factory owner who inherited his business from his father. All Jack wants to do is sit in his office, eat his Chinese food and drink his Jolt Cola, but The Ratts have other plans. They stage a siege on Jack’s factory, enraged that Jack won’t be scared away. Jack and some of the people he’s hiding, Nancy (Mekelburg), and her blind brother Malcolm (Wuesthoff), among a few others, break out their guns to defend the factory. Meanwhile, TV news reporter Opal Brand (Lunde) comes to do a story on Jack and ends up getting stuck there, so she and Jack forge a relationship. But what’s the cause of all this mayhem? Could it be a conspiracy that goes all the way to the top?

Try to imagine a cross between Assault On Precinct 13 (1976) and Chains (1989)  - note that it’s Chains - not The Warriors (1979) - because Dead End City is what you might call a “cheap and cheerful” tale whose threadbare plot and certain chintziness gives away its low-budget origins. Not that that’s necessarily a bad thing, especially as Peter Yuval, who also directed Firehead (1991), seems to have some aspirations of lifting this movie above the crowd, but its penury inevitably keeps it down. 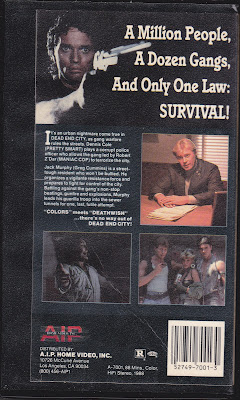 It gets off to a funny start, with fan favorite Robert Z’Dar running around town yelling at people and harassing them, all the while wearing a suit jacket with an ascot, while his fellow Ratts wear the classic “80’s gang baddies” getups we’ve all come to know and love. Z’Dar enlivens any role he’s put in, and here is no exception. Gregory Scott Cummins, who forever will be in the hall of heroes because of the legendary Action U.S.A., makes yet another bid for being a leading action star. Sure, the market was flooded at this time with tough guys, everyone from Stallone to Van Damme to Edward Albert and Richard Norton and so many others vying for the video store patron’s dollars and attention. While Dead End City may have its deficiencies, Cummins certainly isn’t one of them, and he can easily stand as a leading man in his own right. For more Cummins, check out Bail Out (1989) and Cartel (1990).

While the whole “futuristic warzone on a budget” may recall you to some of Ron Marchini’s classics, the music by Brian Bennett immediately puts you in AIP mode. Remember, this is the amazing musician who composed the killer song for Jungle Assault (1989). But there aren’t enough ideas at work to make Dead End City feel like a fully fleshed-out concept. It can barely sustain its 80 minute running time (not 88 as the VHS box states). For this reason, it gets very repetitive and dumb.

If you’re looking for action for pennies on the dollar, Dead End City certainly won’t tax your brain. Thanks to the presence of Cummins and Z’Dar, this is just barely worth seeing.

A cross between Chains and Assault? Count me in! i enjoyed Chains so this one should be fun too. You should also check out Enemy Territory with Jan Michael Vincent for a similar storyline.

Cool! Looking forward to your opinion. We will be watching\reviewing Enemy Territory soon.