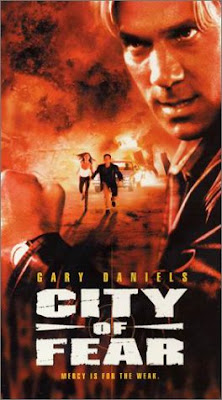 
“Funny what life kicks up, you know?”

Steve Roberts (Daniels) is a journalist who is summoned to Sofia, Bulgaria by his friend Charlie Venco. When  it turns out that Charlie has mysteriously died, it opens up a world of intrigue involving the Bulgarian government, the military, and the medical establishment. Not to mention thugs and the Russian mob. Luckily he has Alexa (Campbell) on his side. What is the secret of the “blood medication”? Steve Roberts certainly wants answers - and he’ll have to use his wits, as well as his fists and kicks - to get to the truth.

Of course this movie is set in Bulgaria - but at least they don’t try to hide it. Even in the fight scenes, dust is used for effect when blows land, but it just makes Bulgaria look like an unnecessarily dusty country. Maybe our Bulgarian readers can write in to see if the rumors are true. But Nu-Image always shoots there, and this one in particular has a low-budget feel compounded by its location. 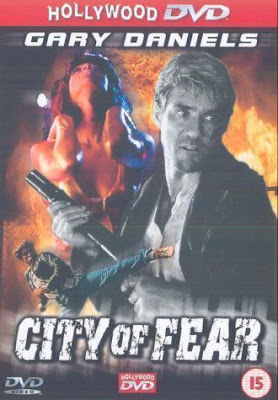 Besides directing utter crud like Warhead (1996) and Marines (2003), Mark Roper also directed Gary Daniels the year after City of Fear to make the similarly-Bulgaria-shot Queen’s Messenger (2001). But what’s weird is that City of Fear seems to be directed...somehow wrong. There are a ton of unnecessary close-ups, the pacing is oddly stilted, and the minimal, weak action is more funny than hard-hitting. Plotwise, this movie is not very exciting or crowd-pleasing. It’s wildly overwritten and needlessly complex. This leads to many dialogue scenes when there should be fight scenes. Maybe they were going for something a little more serious and dour here, but...why? Either way, it doesn’t work. 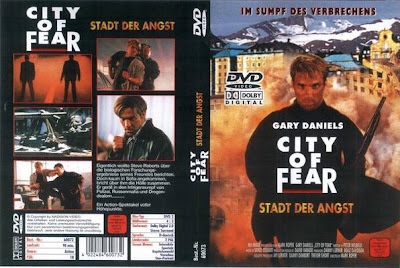 The problem with "No"-Image is that most of their movies kinda suck. They’re trying too hard to be PM. But there’s no sense of fun here. It’s just “eh”. For every one good bit there’s about ten bad-to-mediocre bits. The lack of a strong, central villain helps undermine the movie, as it usually does. Sure, Gary holds it all together, but as strong a screen presence as he is, he can’t save it. City of Fear could have used another name in the cast to help out. Richard Lynch, Robert Z’Dar, Martin Kove...even Frank Zagarino might have added something. Well, maybe not. But Daniels and Scary Spice running around Bulgaria talking for over 100 minutes isn’t what you’d call must-see.

Compare this to other Daniels movies, and you’ll see the disappointment here. It’s truly a missed opportunity. As strong as Daniels’ repertoire is, we guess they can’t ALL be winners. Unfortunately, this is one of the rare non-awesome Gary Daniels movies.

City of Fear is recommended for Gary Daniels die-hards only.

Agree with your review, the incest things I can say about this film is that it's moderately more tolerable then say
Spoiler". Also I disagree about Nu Image, I think most of their movies are actually pretty good, next to PM, they're my favorite production company for action films, Marines and Warhead were both far better then this film, at the very least they certainly weren't boring.

I'm sure I've said this before on someone else's review but I'll say it again. I've always found the blurb on my DVD copy hilarious - not sure if yours is the same but mine refers to Gary Daniels as playing "Half-wit Reporter Steve Roberts".

Umm... really don't remember him being much of a half wit, a little slow to realise that Charlie is a bad guy sure but half wit seems a bit harsh.

Anyway, yeah this a pretty crummy movie, very few fights with Daniels, dull locations, needlessly confusing story and like you said weird camera angle choices. I will stand up for Mark Roper though - I though Operation Delta Force 3: Clear Target was the best of the series.

Venom: Thanks! Warhead at least had some ok stunts. Will be watching\reviewing a few of those movies you mentioned soon: Deadly Outbreak and Cold Harvest. Always enjoyed Scarred City, will have to re-watch that soon.

Jack: Haha. Roberts wasn't stupid, just boring...This was a tough sit...might have a chance to see Operation Delta Force 3...but the 4th one was pretty bad.

Yeah Operation Delta Force 4 wasn't good. Distractingly they took a couple of leading actors from ODF3 and put them in different roles in ODF4!

Like Venom I enjoy a lot of Nu Image stuff. They aren't as stunt orientated as PM were but they still produce some nice trashy movies.

Nu-Image does have some decent stuff here and there. Plus it's nice that they produced The Expendables.

Operation Delta Force 4 was actually my favorite one in the series, mostly cause it was pretty much nonstop action, part 3 was my second favorite, though the ending could've been better.

Some of the action in 4 is decent but the movie drags on too long towards the end. How was Part 5?

Yeah I guess the end did drag a little, I was also kinda dissapointed part 4 didn't really have any name actors apart from Joe Lara.

Part 5 was OK, but it didn't really get going until the 2nd half, part 2 was a decent Die-Hard rip-off, part 1 was the least of the series, but still entertaining for how ridiculous it was, plus it had Jeff Fahey, Frank Zagarino and Ernie Hudson.

Will have to watch the 1st one again one of these days. Will avoid part 5 for now.

This movie needed some skating ninjas like in the Nu Image movie Lethal Ninja. In fact, I think Nu Image should keep the skating ninjas around their craft services table, and throw them in whenever the movie's pace starts to lag.

Haha! That is a great idea! Lethal Ninja sounds hilarious.