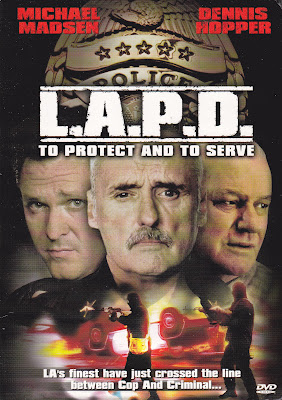 Wade (Bacic) is a young L.A.P.D. cop, and his partner and mentor is Sam Steele (Singer). When their fellow cops Alexander (Madsen), Sextram (Crawford), and Meyerling (Roberds), among others, begin throwing wild parties at a house in the Hollywood hills, and getting involved in illegal activities, Wade doesn’t like it and it begins tearing his professional and personal life apart. Steele is more conflicted, and his father (Durning) and Alexander’s father have histories on the force. When all this affects his girlfriend Kimberly (Hunter), things get personal for Steele and it leads to a showdown. Also, the captain at the precinct is Elsworth (Hopper) - even though it’s fairly irrelevant to the plot, it’s Dennis Hopper, and he’s front and center on the box art even though he’s only in the film for a few minutes.


Anything else you may have read about how bad this movie is, is more than likely true - it has an incredibly cheap, junky look, and even the music feels very low budget. Not that low budget on its own is a bad thing - but what clearly happened here was that all the money the filmmakers had was spent on corralling all these great actors together. Sure, the movie has a killer cast...but at what price? 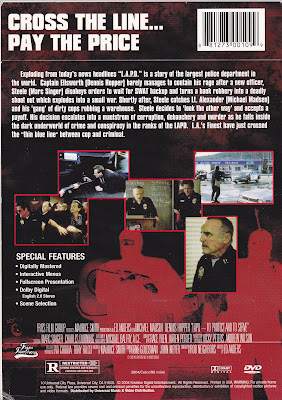 Probably the most offensive thing about LAPD is that it portrays cops in such a negative light. It tends to leave a bad taste in your mouth. This movie was obviously influenced by such films as The Choirboys (1977), The New Centurions (1972), and Extreme Justice (1993), but it’s all done so ham-fistedly. If someone tried to film a James Ellroy story like Dark Blue (2002) on their video camera, something like LAPD might result.


The only snag with it being an Ellroy-style out-and-out L.A. story is...wait for it...it was shot in Canada! That’s right, except for some exterior shots (we think), the whole thing was done in Vancouver. Why didn’t they just change the storyline to be about Mounties? 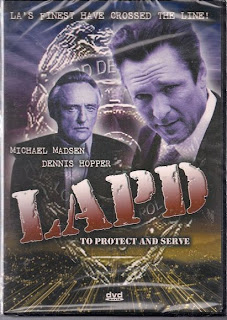 Special note about the locations: In one scene you can see the video store Video Update - their stickers are on many used VHS tapes. We have some in our collections, and you probably do too. Also, there’s a scene at an “adult” movie theater and some characters spend a lot of time in front of a poster for the Romp Screwball Hotel (1988).


It's all pretty light on action, and what action remains is pretty ridiculous - they were trying for a cop drama sort of thing apparently. There are plenty of cliches, and not all good ones either. Crawford as Sextram looks exactly like Robert DeNiro (or perhaps a lost Baldwin brother).

Michael Madsen, who’s cool all the time (possibly because of his love of stealing 2 liter bottles of Pepsi), and all the other names (why is Charles Durning here?) make the movie at least watchable - and it is fairly coherent - so this isn’t the worst movie ever made but it’s still pretty mediocre. It was released as a budget-priced (probably a dollar or so) DVD with an unflattering cardstock sleeve.


We wouldn’t tell you to put LAPD at the top of your list, unless you are an extreme fan of any of the names involved.

I'm undecided if I would buy the story more or less if Hopper and Madsen were supposed to be Mounties.

Now that I've thought about it, probably more.

Haha, it would have made a better movie!

There should be a Mountie action flick...most action films are already shot in Canada...it is a natural progression.

Been busy this week, so I'm playing catch-up on your reviews. Loving all the Madsen flicks! Keep up the great work!

Mountie movie with Dennis Hopper would have been ace...especially if him and his horse snorted a load of coke and went all Blue Velvet.

I've seen a few "Hopper" movies that have blink and you'll miss him Dennis, thanks for the heads up Ty.

The Video Vacuum: Thanks! Happy you're enjoying them.

John: That would have been awesome! Haha. It definitely needed some ramped-up Hopper. No problem about the heads-up.

Madsen's one of my favorite character actors, though he does admit that he mostly does films like this to pay the bills, he's prolific if nothing else, he starred in over a dozen films just this year. Anyways this film wasn't too bad or that good, just very average and forgettable.

Madsen's worst film would probably have to be "The Last Hour"(not to be confused with the Michael Pare film of the same name) which also had David Carradine.

The Last Hour was pretty bad! The editing was all over the place and it wasted everybody...especially Paul Sorvino.

How is the Michael Pare one?

The Pare one was pretty good actually, it's basically Assault On Precinct 13 in a high-rise building.

Cool. Sounds like a fun one. Will definitely check that out.

LOL, I couldn't stand either version of The Last Hour and I didn't even remember Sorvino being in the recent one, only that Madsen had little to do, DMX was wasted & Carradine was saying some gut-busting hysterical dialogue that made no sense whatsoever in any language or context.

This LAPD movie is pretty forgettable but alas it's hard not to crack up during Marc Singer's sex scene & the various shoot-outs especially the final stand-off with Madsen & Co. which is just such a silly rendition of High Noon that you can't helo but shake your head.

We watched the Pare Last Hour about a year ago. Review coming soon. LAPD was pretty silly. Especially all the Madsen scenes. The bit where he just steals the Pepsi was great.