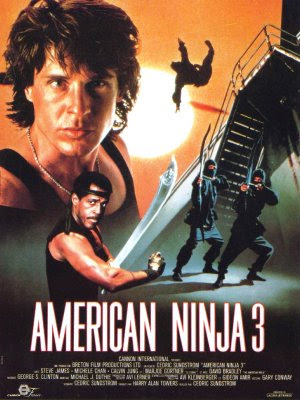 
Sean Davidson (Bradley) is an American Ninja! When his master is kidnapped, he travels to a remote Caribbean island to try to find him. It even may have been perpetrated by baddies he remembers from his childhood. Along the way, he teams up with Curtis Jackson (James, reprising his role from the first two films) and Dexter (Klisser), the classic “annoying” character of the 80’s. Because a sinister baddie known as “The Cobra” (Gortner) is manufacturing a germ that would wipe out mankind, our trio of heroes must stop him, and his goons. For no explained reason, his goons are ninjas in blue outfits. Eventually a female ninja, or, “ninjette” as Jackson calls her, Chan Lee (Chan) joins their ranks. Will they be able to stop the Cobra?

The main problem with American Ninja 3 is that there are a bunch of little moments that are cool, but the movie as a whole is weak. For every underwater ninja fight and cool technique, there’s a ton of material that’s just very, very dumb. We realize you don’t go into a movie like this expecting too much intelligence, but come on. This is one of those “I’m losing brain cells” movies. David Bradley doesn’t really help the situation. It’s hard to replace Dudikoff, but Bradley has no screen presence or personality. Dudikoff’s hair engages you more than Bradley’s performance.

But the real insult is that they didn’t make Steve James the new American Ninja. James, having put in his time in the first two installments, should have risen to the rank of “American Ninja”. Plus he’s a better actor than Bradley and much, much more likable. Plus, he wears a sleeveless shirt that says “Shalom, Y’all” (when he’s not shirtless or wearing a leather vest with no shirt). Also, they call him “Powerhouse Jackson”. Powerhouse should have gotten his own movie. Maybe he could find his long lost brother Action. 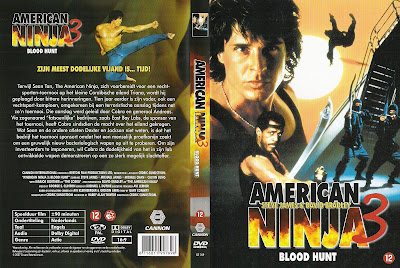 It seems Cannon recycles plots fairly often and the plot here might seem very familiar. Perhaps a cross between American Ninja 2 (1987) and American Samurai (1992). But at the risk of seeming ridiculous, the ninjas here seem tacked on. The Cobra’s goons don’t have to be ninjas, and it’s never explained why they are. It’s funny that The Cobra works at what you might call “Terrorist Labs, Inc.” where he works to develop the technology of terrorism, but why ninjas have to be dragged into this seems like a clear attempt to keep the 80’s Ninja Boom going. But by ‘89 it seems to have been on the wane. So that might explain why we see things like a ninja just sitting in the passenger seat of a car. It just seems so pedestrian. A few short years earlier this same passenger ninja might be disappearing in a puff of smoke or climbing quickly up a tree (which are the main modes of transportation for ninjas, not cars).

As sometimes happens, the end credits song is the best part of the movie. “The Cobra Strikes” by George S. Clinton and Lisa Kauppi is great, not to mention very catchy. It was a shame they didn’t use it in the movie, such as during a montage. American Ninja 3 signals the beginning of the end, creatively speaking, for the franchise.

Also check out our buddies, The Video Vaccum and DTVC's reviews!

Yeah, I did a review of these a while back. The third one is definitely a noticable drop in quality.

I think it shows up what a great job Sam Firstenberg did shooting the first two American Ninjas. Sure, they weren't amazing pieces of cinema but they both had a fast pace and some crazy stunts/fights. This didn't have any of that.

Also, I think this was Bradley's acting debut which probably explains his weak performance.

Definitely agree with your comment...Thankfully David Bradley made Hard Justice later in his career...because American Ninja 3, 4, 5, and Samurai are very mediocre.

ah man what happened to Dudikoff? I thought he was the American Ninja? Well I've only ever seen the first one and he's who I remember being the dude.

Instead of re-imagining Spiderman, why couldn't we get your suggested action masterpiece: The Jacksons: Powerhouse & Action.

Seriously, though, very cool review. I think unexplained ninjas are some of the best kinds.

Yeah, but neither Dudikof nor James could wear a 'fannyback' like Bradley

Too bad. I really liked the first one and I have vague memories of actually liking Samurai but maybe that was just my young age talking at the time... Great review as always Ty!

Markuswelby1: He was the real and only American Ninja. Except no substitutes.

M. Brown: Thanks for the kind words. Can't agree more.

Lee: Haha, he is the best at fannypacking.

Jesper: Thanks! The 1st and 2nd are great fun.

I love your blog! Very glad I am a follower, really enjoyed this post! Would be great if you fancied checking out my blog and perhaps followed back?

Thanks! We really appreciate it. Just started following you too.

I actually thought Bradley did a decent job, though he improved in part 4. This definitely isn't as good as the first 2, but it's still entertaining enough.

P.S. Do you have Impact from Comcast? They have a pretty good selection of action films, saw Diplomatic Immunity last night, pretty good film, it's a shame Bruce Boxleitner's career never really took off.

We do have Comcast Impact On Demand...and watched Diplomatic Immunity a few months ago. Not bad at all. Review coming soon.

Definitely agree about Boxleitner...he could have been a decent action star like Tom Berenger or Treat.

Thanks for the plug! I couldn't agree with your assessment more! At least DUDS came back for Part 4.