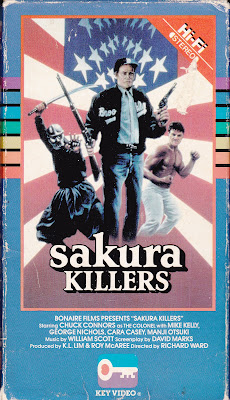 
There’s a very important Beta tape out there with scientific information that could either save the world, or destroy it, so it’s very important that it doesn’t fall into the wrong hands. When the tape is stolen by ninjas, The Colonel (Connors) (did you expect a last name attached to that?) sends his two best men, Sonny (Kelly) and Dennis (Nichols) to Taiwan to investigate. It seems a certain Sakura, or Cherry Blossom, emblem is attached to the theft of the tape. Along the way, the two Americans train to learn the ways of the ninja, which will come in handy if they must fight to get the tape back. Will they succeed?

Sakura Killers is one of the most fun and enjoyable 80’s Ninja Boom movies we’ve seen to date. The level of nonsensicality on display here is hard to articulate, you just have to see it for yourself. The presence of the great Chuck Connors (or “Conners” as they spell it in the credits) adds so much. Seemingly from the Robert Stack/Peter Graves/Charles Napier school, The Colonel, as we’re informed on the back of the Key video box, is, and we quote, “A ninja-buster”. Presumably the meaning of The Colonel being a ninja-buster is, he can just kill ninjas on his golf range and not give it a second thought. Connors wears the same Brooklyn jacket he wears in Terror Squad (1988), but this time he has a matching hat. In what we think is a semi-sequel to this movie, White Phantom (1987), Bo Svenson plays The Colonel. Svenson’s good, but by that time, he has a last name, and it’s just not the same. Watch Sakura Killers to see Connors as the original The Colonel. 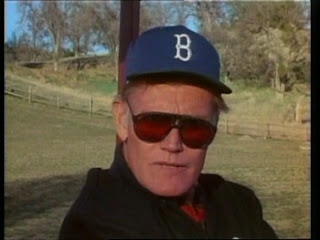 Plus, in trying to get information on the Sakura case on the computer with his associate Karen (Cara Casey, in sadly her only credited movie role to date), the computer states that the perps are “possibly Oriental”. This may be what prompts The Colonel to say derisively, “Computers. And I thought they were supposed to make life easier.” Besides predicting the future, this must mean he prefers to do his ninja-busting mano-a-mano. But helping him is one of the biggest meatheads ever, George Nichols as Dennis. We’re surprised they didn’t name him Ox (or perhaps Moose). But he does have a wicked sense of style. It all adds to the silly, funny vibe of Sakura Killers. 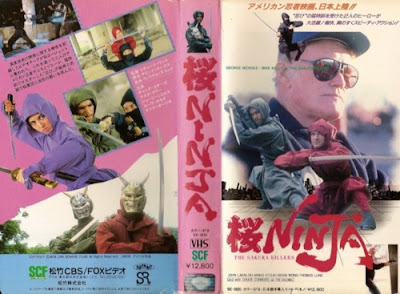 The movie has an outstanding opening, and it’s hard to maintain that throughout the whole movie, but it comes pretty close. Plus there are plenty of 80’s standbys such as cassette tapes, the aforementioned Beta tapes, the old-school computers, and it wouldn’t be an 80’s movie without some aerobics. Add some insane ninja action and Chuck Connors being surly into this mix and you have a real gem.

We loved Sakura Killers and we’re very confident anyone out there with a sense of humor will too.

You really make it hard for me to comment,lol..most movies you are reviewing, I have never heard of. But I like reading them anyway..and sometimes I find a movie that catches my interest. In any case, I enjoy reading the reviews!!! But over 90 percent I have never touched or dreamed of taking a look at. But im working at expanding my horizon...too many movies, so little time...

Thank you for the nice words! Don't feel bad if you haven't seen too many movies on our site, one of our goals is to turn people on to cool and interesting stuff.

Hope you get to watch it soon.

I was first turned on to this film when I read a review for it on Badmovieplanet.com

Read that review too...made us want to buy it! It is a blast to watch.

Love love love Sakura Killers, easily one of the most amusing films of the 80's

Hey, I tagged you for an award!
http://notthistimenaylandsmith.blogspot.com.au/2012/07/not-this-time-nayland-smith-has.html

A Hero Never Dies: Happy you love it too! Can't agree more. What a fun film with a ton of silly ninja action.

Chris: Thanks! We appreciate the award\tag.

Cool review Ty, I remember this one. I had a VHS of this and Lucky 7 that got watched...to...death! Great review.

Thanks! That's cool that have a copy of this 80s classic. Chuck Connors at his ninja-busting best!

Another one of those apparent so-bad-it's-good films that I've known of for years, but never caught up with. Now I need to hunt it down (as I had with 'Night of the Kickfighters') thanks to your addictive review.

Thanks! That means a lot to us. We know you will love Sakura Killers! What did you think of Night Of The Kickfighters?

Ty, I thought 'Night of the Kickfighters' was no less than the 'Manos - the Hands of Fate' of martial arts films. It was so staggeringly incompetent, that I just kept grinning and shaking my head at it. Every action (cough!) scene was akin to watching Torgo walk around (or just trying to get to his feet). As 'Bad' action movies go, I didn't like it as much as 'Strike Commando', 'Massacre Mafia Style' or 'Death Warrior' (Olum Savascisi) but still, wow...

Remember when the guy kicked an inflatable dinosaur? Good times.

Saw it for a long time on VHS cause in loved Chuck Connors since his TV-Show called in German "Westlich von Santa Fe".

That is awesome you own this too! Chuck Connors was a legend and he was at his best in Sakura Killers.

Guys, with all due respect to your rating system -- with which I generally agree on a ton of counts -- I believe Sakura might just rate elevating into the rare and vaunted Four Star Club. It may be the definitive non-Ho Ninja goof-fest of the later 80s, but the more I think about it, it's also really good!

Also, a special exception should be made where Mismatched Couples is actually given 5/4 stars. That and Robowar.

Thanks for all you do, love this place!

Thanks for the nice words! You're right. We will have to amend that rating!