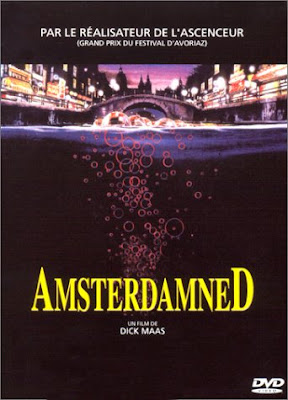 A mysterious serial killer is stalking the canals of Amsterdam. He wears a black wetsuit and diving mask, and he kills with a harpoon. As the body count rises, detective Eric Visser (Stapel) is assigned to catch him. It’s not going to be easy, as this particular baddie is extremely clever and crafty. Soon, the full force of Amsterdam’s police are chasing down the man terrifying their beloved city. Visser must not only catch the killer, but also protect his young daughter Anneke (Dagelet) and her friend Willy (Bakker), not to mention girlfriend Laura (van de Ven of Stunt Rock fame). Can he do it?

Amsterdamned, as you might be able to surmise from its great title, is an extremely enjoyable movie with a dark sense of humor. It takes Dutch culture, everything from its red light district, to Rembrandt paintings, to Amstel beer and of course its famous canals and architecture, and injects a malevolent, murdering presence into it. That, and the idea that a killer can use the canals to kill and escape, is excellent, original and crowd-pleasing. The whole venture has a great vibe and thus is a winner. 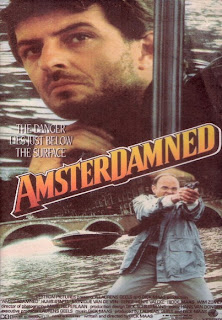 Huub Stapel as Visser is your typical quirky, unshaven cop who gets results. To our eyes he resembles a Dutch Jean Reno, or perhaps a Dutch Cobra (AKA Marion Cobretti). He also has a cool jacket and there are other wonderful 80’s fashions on display as well. Writer/director Dick Maas not only uses the city of Amsterdam to its full effect, but he also loads the movie up with inventive moments and unique camera angles. This keeps the pace of the movie on track, although at times it is hard to sustain the nearly two hour running time. And even though most of the characters dubbed their own voices, if the movie had been trimmed of a bit of fat, and subtitled instead of dubbed, we’d be looking at an ultimate classic. As it stands, it’s merely great. So not a huge loss there. 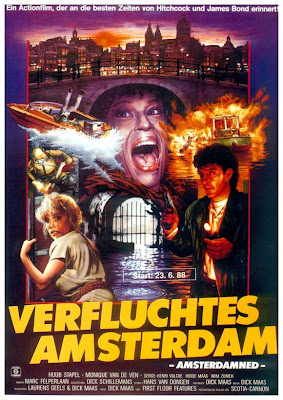 But we see why Maas decided to dub the movie, he was clearly going for the international (and especially the American) market. And he had every right to be successful in it, as the movie has some great chase scenes, as well as its unique concept and location. So he was able to formulate a winner, and Vestron must have agreed, as they released it on VHS here.

Another Dick Maas film you should check out is "The Shaft"

Always wanted to see that. It has been an short wait on our Netflix queue for months.

Great film..still have a vhs of that one...although it might be a cut version...

Happy you enjoyed the movie too...do you have a U.S. copy?