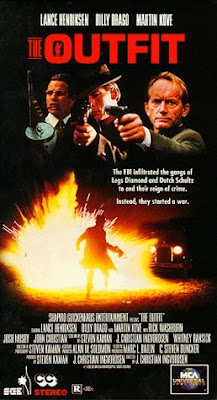 
Set in the 1930’s, The Outfit is a tale of gangsters and prohibition. The notorious Legs Diamond (Mosby) is at odds with equally-infamous Dutch Schultz (Henriksen). Lucky Luciano (Drago) is trying to hold it all together so their bootlegging and other illegal activities can “become as big as U.S. Steel” (which is based on an actual quote). Sensing the brewing hostilities between the two “public enemies” and their camps, G-Man Bone Conn (Ingvordsen) infiltrates the operations and sets off a mob war. Conn’s boss, Agent Baker (Kove) doesn’t necessarily like his rogue ways, but he needs results to show J. Edgar Hoover. But will playing both ends against the middle get Bone in a whole heap o’ trouble? It just may, because you don’t want to get on the bad side of some of the most feared gangsters in history. Dare you try on THE OUTFIT?

Ignore any negative things you may have heard about this movie (if you heard anything at all - it seems to be one of the lesser-seen movies in the canons of Henriksen, Drago and Kove). For a DTV item that clearly took its cues from Bugsy (1991), Mobsters (1991), and The Untouchables (1987), the latter of which also featured Billy Drago, but with a fraction of the budget of these Hollywood movies, The Outfit comes out an entertaining and worthwhile piece.

From the team of Ingvordsen and Kaman, the dudes behind Comrades In Arms (1992), they’ve upped the ante and admirably attempted - and succeeded - making a period piece with a low budget for the Direct-To-Video market. Ingvordsen once again stars as the hero/badass named Bone (just like he did in Comrades), and Kaman, who shot the movie, does a nice job using some lenses and grain that help with the period feel. As long as Kaman isn’t directing, he usually does a good job. Drago was a great choice for Lucky Luciano - Drago has made a career of being a professional villain, why not try him as a real life gangster?

Plus there’s the currency Ingvordsen and Kaman could leverage from Drago’s turn as Frank Nitti in The Untouchables. Fan favorite Henriksen goes all-out in his portrayal of Schultz. It’s great to see him get angry, yell and be tough and intimidating in that role. Kove is also winning in his relatively small role as the FBI boss. Together with Josh Mosby as Diamond and the aforementioned Ingvordsen as Bone, not to mention Rick Washburn and others, the strong cast helps a lot and puts this movie in the winner column.

There was obviously an attempt to get some authenticity and some real-life events in, and the writing shows that. But they also didn’t skimp on the Tommy guns. It’s really a nice mix of good writing and action violence, and if they had more money, they would have made Public Enemies (2009) 16 years before Public Enemies.

Some minor negatives include: the film starts to lose focus at times, especially in the brief Punchfighting scene (yes, there is some quick Punchfighting - it did exist in the 30’s), and some of the acting from a few of the non-principals and some staging got a bit wonky at times, as it is wont to happen in some DTV products. But really that’s all we can say as to a down side to this movie. We applaud their ambition to make a historically-based period piece with the resources they had.

If you’re seeking some different fare but with some familiar faces, do check out The Outfit.

I thought this film sucked big time, I feel pretty much the same way about The Outfit that you do about Hangfire, the good cast just isn't enough to rise above the lousy material, the nicest thing I can say about this film is that it isn't as terrible as Public Enemies.

I have a weakness for Ingvordsens movies, or at least a few of them...
Hangmen is my absolute fave, recently I checked out Blue Vengeance...still have to watch a few..need to get my hands on Comrades in Arms...I kinda liked Outfit...for such a low budget it has some decent b movie heroes.Lance and Drago I can stomach in any shit anyway...love to watch em..

Comrades In Arms is very solid. You will enjoy it. Review coming soon....Lance and Drago propelled this movie along...they are always good!

Also we another Ingordsen movie dropping on November 30th: Search and Destroy.

Basically confirmed by the director:

Cool, its getting more of a release. Fun movie.