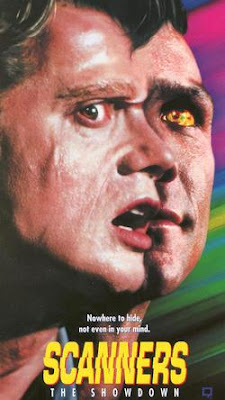 
Det. Sam Staziak (Quinn) is not simply a Cop On the Edge, he’s a scanner Cop On the Edge. As a member of the L.A.P.D., he’s used his scanning abilities to thwart bad guys city-wide. His Captain, Jack Bitters (Forster), supports him, but Staziak is having some personal issues, as he’s trying to find his mother. Towards this end, he’s enlisted the help of fellow scanner Carrie Goodart, who runs the Trans-Neural Resource Center, sort of a non-profit group by and for scanners. But a new threat looms in the form of Karl Volkin, an evil, malevolent scanner who’s going around the city killing other scanners in his quest to be the ultimate scanner. Like a vampire, he feeds off their power and is growing more and more strong by the day. Looks like it’s time for the ultimate showdown: Staziak vs. Volkin in a mind-melting duel to the death. Who will prevail?

We liked Scanner Cop II (or Scanners: The Showdown, as the VHS we viewed has it). As a sci-fi sequel, we went in expecting the worst. But it’s really not bad. There are a lot of interesting scanner-based ideas, such as using scanning power for good or evil, the vampiric scanner, and the scanner killing other scanners for scanner domination. Did we use the word “scanner” enough yet? There are other ideas woven into the plot as well, which helped immensely. If there are ideas that are reasonably well-thought-out, it’s hard to go totally wrong, and thankfully the writers knew that so they developed certain thoughts. It’s all perfect for the video stores and pay cable outfits of the 90’s. On top of that, there are some cool and gory effects, making Scanner Cop II better than expected. 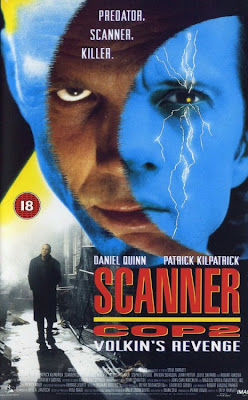 Patrick Kilpatrick usually plays a baddie and here you get to see him at the height of his evil powers. Robert Forster does almost a sit-down role but he adds color and professionalism to the proceedings. Kane Hodder and Jewel Shepard appear in small roles, but the true star of the show isn’t Quinn, it’s a man we think is named Julian Neil (but we’re not sure) who plays “Kidnapper Leader”. This bad guy who is not important to the plot at all, gives an insanely over the top performance. He has a highly comical Muppet voice and he just about steals the movie with his brief screen time. This guy should have gone far. 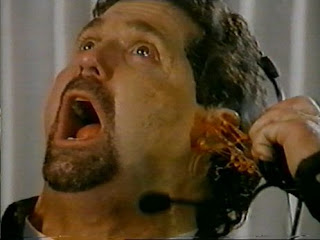 We have a screener copy (not to be confused with a scanner copy) of this on VHS from Republic Pictures. In a packaging move we haven’t seen anywhere else, there’s a gatefold flap that unfolds from the left hand side of the box. We don’t know if it reached stores with this added value piece. It might be just for the screener, or perhaps just for the Canada VHS, which is where it was released as Scanners: The Showdown. We thought this was worth mentioning because it was so unusual.

In all, Scanner Cop II was way better than we thought it would be.

Have you seen the first Scanner Cop? It surprised me too! I think it's actually better made (pacing and plotwise) than the original Scanners! It definitely makes me glad to know that the sequel isn't awful!

The Scanners sequels were all pretty good, though the first Scanner Cop was my favorite.

Congrats on the 700th post. I absolutely love both Scanner Cop movies. The first one is a little better but this one is still a whole heap of fun. Kilpatrick makes for an awesome villain.

Disappointed they turned Staziak into a leather jacket wearing maverick cop. He was way more fun as a slightly dorky rookie in the original flick.

Thanks Jack! That's interesting that he was a dork in the 1st one. Haha.

The Scanner Cop flicks were a good change from the "mind control fascism" angle that had made Scanners 2 and 3 indistinguishable in my mind.

We definitely agree with you. Hope to see Scanner Cop 1 soon...Thanks for your comment!

I really loved all the give 'scanners' films with all the heads and bodies expansions. I hope the other good moviemakers will make an over billion of new 'scanners' movies.

A total of 500 Scanners movie sequels? Wow! That would keep the air bladder industry in business for the foreseeable future.