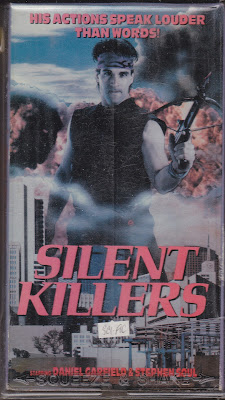 
"His Actions Speak Louder Than Words!"


It’s almost pointless to try to recount the plot (?) of this gem, but we’ll try: apparently a man named Tanaka has a formula that will either save or destroy the world, so Larry, Becky and Brenda kidnap him and try to get said formula. The power Tanaka contains comes from some sort of magical mirrored mustache that he must place on a magical mask. So far just your run of the mill day. Tanaka and his captors, who really aren’t so bad after all, end up becoming friends and teaming up against the real enemy: the evil White guy named Martin. Both the good and evil sides of this spectrum have ninjas that fight against each other. Exactly how ninjas are interjected into all this is anybody’s guess...but will the overwhelming power of the magical mirrored mustache drive Tanaka insane?  DARE you find out the secret to the SILENT KILLERS?

Insane movie alert! I guess it probably doesn’t need to be said again, but at the risk of repeating ourselves: THIS MOVIE IS INSANE! If this movie was a person, it would be put in a rubber room for life. It would make Crazy Eddie and his prices look like Al Gore. It’s from Joseph Lai and Betty Chan, the producers of many a Godfrey Ho classic. But this one’s shot on video! Can you imagine an SOV Godfrey Ho movie? Though the director is listed as one Lo Gio, this is perhaps the closest we’ll get to a non-patchwork, video-camera-shot Godfrey Ho movie, and the results are...really something. 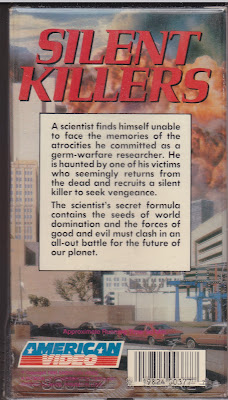 There are some amazing 80’s fashions on display, mainly Larry’s shorts...but he’s outdone in the shorts department by Becky’s Confederate flag shorts! Presumably other countries get America’s hand-me-downs and they don’t know the symbolism involved. Either that or Becky fought for the south. Because it was shot on video, it has that Razor Sharpe (1998)-style vibe of “anyone could do it”. But could anyone do THIS? Just look at the “my first editing machine” transitions between scenes. But the Master has magical Ninjitsu powers which have to be seen to be believed, there are some classic “underground ninjas”, the prerequisite “final ninja brawl”, and there’s more slow motion than Hard Target (1993).

If you read the website Bleedingskull.com, you may have some idea of what to expect here. It seems they review things like this and it would be right up their alley. Silent Killers is very fun, highly ridiculous, completely nonsensical, and makes you realize that coherence in movies is just so boring. Sure, so many movies are out there that are “coherent” and blah blah blah. Anybody could do that. It takes something special and different to churn out a mutant like this.

From what we can gather, this movie is quite rare. It’s listed in the VideoHound under the name Silent Killers but its official title on IMDB is American Commando Ninja.  It was released (ironically) on American Video. They make it look like some sort of post-apocalyptic thriller with an American cast. Why they thought that would be more attention-grabbing than the insanity within is unknown. It’s finding rarities like this that make movie watching and collecting a rewarding experience.

If you can find it, definitely see Silent Killers.

Sounds great! Any chance you could upload this film online?

We would love to do that, but don't have the capability.

I think this might also be known as American Commando Ninja (which has an imdb entry) if that helps people to find it. If it's not the same film, it certainly has the same confederate short-shorts.

Thanks for the info! We appreciate it. We will put the review up on IMDB.

Found some more info on this one, apparently you can get it from Amazon on a PAL DVD called TODESSCHWERT DER NINJA. There's also a really well-done fan made trailer for the film on Youtube. Oh and there's actually a sequel to this film called "Born A Ninja"

That is really cool there is a sequel...will have to track that down...Thanks once again for looking into this movie.

Slight correction, turns out Born A Ninja came out before this film, and Silent Killers is actually a sequel to that movie.

Ah i see! Looking forward to checking Born A Ninja out one of these days.