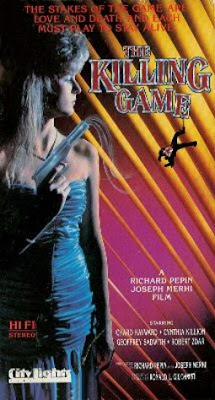 
Max Gilton (Hayward) seemingly has it all: he lives in a huge house in a ritzy part of L.A., and he conducts illegal gambling operations from his house, which earn him millions from an upper crust clientele. Women are constantly coming and going from his mansion, which has his lawyer friend Jeff (Geoffrey Sadwith) jealous. But Max’s life isn’t all fancy parties and working out in his home gym. To supplement his income, he works as a hit man to his rich casino patrons. One day, he receives some photos in the mail of himself caught in the act of execution. Paranoia seizes Max, and eventually he travels to Las Vegas, where mob boss Antonio Markaze (Z’Dar) is more than willing to take advantage of the situation. Adding to that, Max has been accused of killing his wife and sister in law. The police are hot on his trail, but he maintains his innocence. What’s Max going to do?

The Killing Game is a City Lights production - for those who don’t know, it’s PM entertainment’s Richard Pepin and Joseph Merhi’s company in their pre-PM years. Looking back now, you can see them finding their footing. For instance, there are plenty of amateurish moments, especially in the technical department, and the movie is filled with strange-looking non-actors. But that’s all part of the overall vibe, which the video look helps convey.  It certainly adds to the unique feel of this movie. But it’s almost as if they were learning on the job, as The Killing Game certainly gets better as it goes along. You have to wait 54 minutes until Robert Z’Dar shows up, but once he does, the movie is in high gear.

Chard “Why Is My Name CHARD” Hayward puts in a surprisingly strong performance. He could have not taken the role seriously, but it seems he did. He’s a suave fellow with a light British accent. There are numerous scenes of him working out, but with no song behind it. Wardrobe-wise, he seems to have a penchant for bowties and short shorts (though not necessarily at the same time). Because of this, as well as his awesome shades and his rockin’ jeep, he seems to make the ultimate 80’s blackmail target. Chard carries this role rather well.  Complementing him is his friend Jeff, and the guy who played him, Sadwith, as far as we know, has never been in any other movies. He definitely could have had a career as an actor. It’s a real shame. He even could have played Raymond on Everybody Loves Raymond.

As far as fan favorite Robert Z’Dar (which is credited without the apostrophe), he’s reasonably menacing here, and to make him more “Mafia-like”, they put some gray touches in his hair and he speaks in a raspy voice. His fate in the movie is definitely worth watching out for. But like all mob bosses, he spends his days in a theater watching dancers rehearse. Nothing says “don’t cross me” like admiring men mincing around in spandex and leggings. But the good news is, just as we thought that this movie couldn’t possibly rival its fellow City Lights production, the awesome Dance Or Die (1987), it actually does! The climax of the movie is even very similar to Dance Or Die, with the action intercut with the dancing! Apparently Pepin and Merhi felt this was an amazingly winning formula, because they went with it on TWO occasions that we know of. Wow. Now that’s something.

In the end, The Killing Game does have its flaws, and it takes a while to get going, but for the prehistory of PM, Robert Z’Dar, Chard, and the sheer 80’s-ness, it’s certainly worth a look. It won’t change your life, but it’s not a bad way to spend 90 minutes or so.

Agreed, an entertaining off-the-wall film, the only PM film I didn't really care that much for was Coldfire as for the most part it was pretty boring.

Happy you agree...You're right, Coldfire was a little weak...Wings has been better.