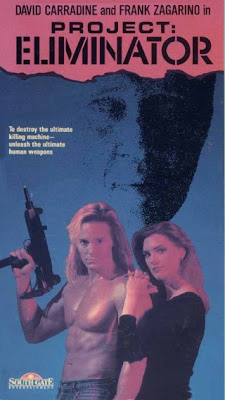 Much like KFC’s popcorn chicken, John “Striker” Slade (Zags) is back! Did you ever know it/he went away? This time around, the Strikester teams up with a buddy of his, Ron Morrell (Carradine), a Vietnam vet, and tries to rescue a kidnapped scientist, Dr. Markson (Bryant). It seems Markson has invented a flying laser contraption, and in what can only be explained as a fit of doubt, blows up his nifty invention. After doing this, he was kidnapped by a team of baddies led by the sinister Elias (Clark). The only people on earth that can rescue the scientist are naturally Striker and Morrell, and Jackie Markson (English) is helping them out. Will Markson be rescued? Will the world be safe from flying attack lasers once again? Find out today!

Project Eliminator is definitive proof that long blonde hair and Ray-Bans conquer all. Naturally we’re referring to Frank Zagarino, and, judging by the VHS box cover, he’s clearly the ultimate cool dude/meathead, or meatdude, if you will. One of the many lessons you can learn watching this movie is that a shirtless, mulleted hulk with tight ripped jeans, in and of itself, solves problems in life.

Never mind the fact that Striker (whose nickname is Striker, don’t’cha know) is ex-Army, ex-Marines, ex-Delta Force and ex-Special Forces (we kid you not), always hits his target, and is, according to Morrell, “Bulletproof”. He’s definitely a man you’d want on your side, and Zagarino and Carradine make a winning team. This movie definitely ranks among Zagarino’s finest work, and from the moment you see him on a motorcycle with his long flowing locks in the wind - and especially when he’s wearing a motorcycle helmet, so it looks like just a morass of blonde hair spilling out of a blank head - you know that if you don’t shut off your brain, this movie will shut it for you. 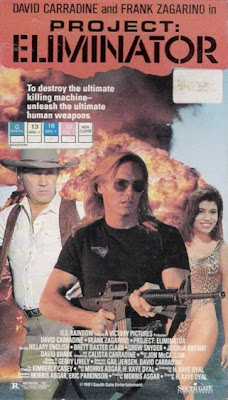 It seems haters of this movie out there do not have the word “Fun” in their vocabulary. That’s just what this is - fun - and it was never meant to compare to the works of Ingmar Bergman. Though Zagarino is certainly blonde enough to be Swedish - wouldn’t it have been something to see him in a Bergman movie? One can only lament the fact that it never happened.

Carradine certainly gives Zags a run for his money the whole way through: we’ve never seen him so animated. He has energy, he actually smiles numerous times, and he even sings and plays the piano at one point! This is the Carradine we want to see, as opposed to his uncaring, listless performances in Future Force (1989) and Future Zone (1990). It’s pretty clear he was having fun here, as his bolo tie and cowboy hat may indicate, and he’s listed, along with Gail Carradine, as an associate producer, so he gave himself some freedom and it’s infectious. Calista Carradine is on board as well as Vanna.

As for the baddies, Brett Baxter Clark of Delta Force Commando (1988) fame stars as Elias, looking like a cross between James Brolin, Bob Vila and the guy on the Just For Men box. What with his well-kept, classy beard and all. Interestingly enough, Clark played Shark in Shootfighter II (1996), and his sidekick in Project Eliminator is none other than David “Shark” Fralick, who is credited as just David Shark, playing...wait for it...SHARK! Seeing as how Fralick is also a muscular, long-haired, blonde meathead, when he and Zagarino fight it’s like a Mortal Kombat "Mirror Match". It’s very hard to tell who’s who.

Early in the movie, some baddies attempt to rob a store using rubber President masks. Obviously 1991 was a huge year for said masks, as Point Break also was released.

Director Dyal directed Trained To Kill (1990) the year before this and was obviously preparing for the brain cell-depleting fights and shootouts, pew pew laser shots, inane dialogue and unbridled Zagarinoness on full display here. Containing some rewindable moments, Project Eliminator is brainless fun at its best.

Also check out a review from our buddy The Goodkind!

Best first line of any review ever.

Filmed on location in central New Mexico! A personal favorite of mine.
Project Eliminator

The Video Vacuum: Haha! Much like John "Striker" Slade, we aim to please.

The Goodkind: It is a one of Zags's best. Just a ton of fun to watch. Just put a link to your review too.

This review seriously cracked me up. My three year old son kept asking, "Dad, why are you laughing?"

This is hands down, a must see. If only to see the 'Just For Men' guy finally get to use that classy beard of his.

This sounds like a pearler! Will have to hunt it down.

M. Brown: That's one of the nicest comments in awhile! Thanks for laughing. We appreciate it.

Explosive Action: It's a real gem all right! Zags rules.

Great review. Is this actually supposed to be a sequel to Striker? Or was the character's name simply so good that Zags had to use it twice?
My favorite Zags movie: Without Mercy (although I may be a group of one in my opinion...or perhaps a force of one)

Love that you changed your screen name to include Striker! It's the ultimate nickname. Haha.

This is a real sequel to Striker..review coming soon.

I love pretty much anything with Frank Zagarino, one of the best films he was in was Ezno G Castellari's "Hammerhead" too bad that one never got an official U.S. release(though there are downloads of it availible)

Hammer really should be available in the U.S. Had to buy a foreign copy off Amazon. Fun movie!...Loved the beginning chase. Review coming soon.