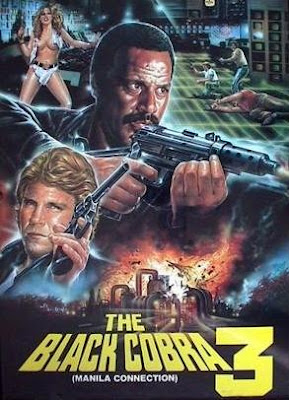 Black Cobra is back! Cobra! This time around, Robert Malone (Fred), who is one cool customer, travels from his native Chicago to the Philippines (where else?) to investigate the death of a former Vietnam buddy, Charlie Hopkins (Hourani), who was working as some sort of commando trying to infiltrate a weapons-smuggling ring. But it’s not just simple handguns, it’s actually missiles that once belonged to the U.S. government! Capt. Phillips (Monty) is demanding answers. So Malone teams up with Interpol agent Greg Duncan (Smith) and fellow operative Tracy Rogers (Ward) and the three of them travel all over the Philippines searching for the truth. Naturally, fights and shootouts follow. But due to the unending stream of baddies with machine guns, will Malone’s Manila connection get severed? Find out today!

While it may, at first, seem surprising just how many Black Cobra movies there are, it becomes less surprising when you think about the cooler-than-cool Fred Williamson. He has charm and screen presence, so why wouldn’t Italian producers - or any producers - want to work with him? Black Cobra 3 delivers the Fred you want, as does the first Black Cobra movie. Starting with the very, very silly opening sequence with Ned Hourani, the movie provides good entertainment value. Granted, it does slow down at a certain point and enters Jungle Slog territory, but then it picks back up at the climax with Fred and his compatriots mowing down wave after wave of Filipino soldiers. You gotta love a good mow-down.

As if we needed to be reminded even further at this point in the series about its roots as a Cobra (1986) knockoff, our introduction to Fred comes in the form of yet another supermarket showdown. To avoid constant danger of being killed, Fred should probably switch to Peapod. But it’s really no sweat for Fred, he deals with the situation with style and aplomb. When he travels to the Philippines to meet up with his contact, the Interpol agent/skintight pink polo shirt collector Duncan, you think he’s finally found the ultimate partner. Duncan is a wealth of information; if you’ve ever finally wanted to know the difference between stone washed and acid washed jeans, Duncan’s expertise can put the matter to rest for you. The female member of this three-person army is armed with a “modem” which seems like some kind of cross between a word processor and a pager. We always love seeing 80’s/early 90’s technology, and this thing is a doozy.

The movie also features one of the best BYC (Black Yelling Chief) scenes we’ve seen in a long time. When Fred is dressed-down by his Captain in Chicago, watch out. Another thing we like is on hand, the disco scene, this time featuring a song highly reminiscent of “Boogie Nights” by Heatwave. Speaking of music, there’s plenty of sax on the soundtrack, and there are two gems for songs: “The Power of Love” (not to be confused with the Huey Lewis and the News song of the same name) and a song we think might be called “Save Tonight For Me”, but alas there are no song credits on the film. Also worth noting are the red grenades, the time-honored waterfalls seen in just about every production of this type, and the fact that it was all directed by Antonio Margheriti’s son, Edoardo.

Released on VHS in the U.S. by South Gate, Black Cobra 3: The Manila Connection is everything you’d expect from an Italian-produced Fred movie from 1990: (despite a couple of slow moments) - FUN.

Also check out reviews by our buddies, The Video Vacuum and Cool Awesome Movies!

cool review. not as good as the original but still some quality fun with The Hammer...

It's funny how in the first movie Cobra is a tried and tested New York cop but by the second and third he's a gritty Chicago native wearing a Cubs jacket like Chuck Norris in 'Code of Silence.'

I'm not really sure how that "modem" works, but it sounds like it's gotta weigh at least 8 pounds.

If only we had those modems today...life would be simpler! Haha.