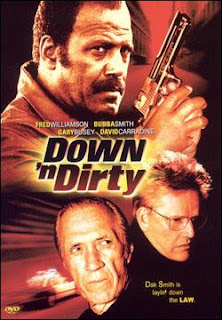 
Dak is back! That would be Dakota “Dak” Smith (Williamson) to be precise. First seen in Night Vision (1997), Down ‘n Dirty is his second appearance, followed by On The Edge (2002). He also portrayed Dak in The Rage Within (2001) the same year as D’ND, 2001. This time around, the Dakster is in a whole heap o’trouble after his partner of many years is suddenly shot. As he tries in his inimitable style (ranging between cynical Cop On The Edge to smooth ladies man) to get answers, he runs up against resistance and even outright hostility in his own department - everyone ranging from his Captain, Teller (Napier), to Det. Ward (Lo Bianco). It turns out there’s corruption and conspiracy involved from D.A. Casey (Busey), who is in contact with the mysterious Gil Garner (Carradine) - who commands an army of goons such as Jimmy (Divoff). Naturally, they all want Dak’s head, because he’s trying to get to the truth. Does even his friend Det. Cale (Smith) believe him? Dak is going to have to team up with photographer Nick Gleem (Goodwin) to ultimately find out. Can he do it?

Somehow Fred is able to corral all these great stars to be in his movies. Sure, as we noted in our review for On the Edge, the dialogue is muffled at times, and the music drowns it out - because apparently for us, the audience, hearing electronic drums bashing away is more important than hearing valuable plot points - but thankfully the great Fred Williamson carries the 70’s/80’s-style cop drama/thriller into the 21st century, with no apologies. To the jaded and cynically minded, you could say it’s filled with all the cliches we’ve all seen thousands of times before, but those people are overlooking one crucial detail: the charm of Fred Williamson. Fred’s charisma absolutely carries this movie, as well as many of his others, and even the filler (which there’s plenty of, and as a result this movie could have been shorter) is enjoyable. The cliches are fun cliches, and the filler is fun filler, and we should be happy this movie was made in the first place. 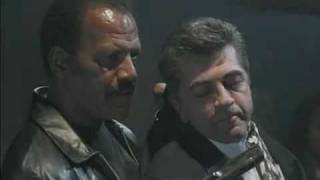 Let’s not overlook that this is Bubba Smith at his absolute best. His line deliveries are priceless. He’s a giant man who wears a short tie that only reaches to about his sternum, and his hair is just...inexplicable. It looks like as if the top of his head - which doesn’t match the sides, mind you - is a cross between Frankenstein, Alfred E. Neuman and a black lacquer floor. Moving on, fan favorite Sam Jones makes a very brief (one scene) appearance, and looks highly uncomfortable. He also has an unexplained bearded biker dude as his sidekick. So many questions, so few answers. There’s minimal Jones, minimal Divoff and minimal Carradine. Carradine does a “sit-down” role and both he and Busey don’t appear until 51 minutes in.

Nick Gleem, as the sidekick, and who adds “like the toothpaste!” every time he introduces himself, ends up being called simply “Toothpaste” as his nickname. Not to be confused with “Speedboat” from Snake Eater II (1989). In the “awesome urban compound word nickname” awards, Toothpaste has the wackier hat, so we’ll give him the prize. And, unrelated to Mr. Toothpaste, as in Direct Contact (2009) when someone says “What if he goes AOL?” here, in Down N’ Dirty, someone says “Get it to me SAP”. Either this guy is REALLY in a hurry, so much so he has no time for the initial “A”, or maybe he wants to use his TV remote to watch his favorite shows in Spanish, but like a lot of things in this movie, it remains unexplained.

Besides Fred’s screen presence and a cast of familiar faces, the other thing that keeps this movie afloat is the music. By Johnny Ross (some songs are credited to J.R. and Li’l Big - we assume J.R. is Johnny Ross), the standouts are the main title theme and “Come Back Dak”. It sounds like it could be the same singers who sang “Dakota Smith - You‘re 12 Steps Away”, from Night Vision, but we’re not sure. We love the idea that Fred Williamson has his own personal singers who are on call for him at any time. Hopefully that is the case. Supposedly, the legendary Volt label released the soundtrack, and the main title features the line “If you’re on the take, you made a big mistake”, so it might be well worth finding. You don’t hear lyrics like that every day. More top 40 hits should be about systemic inter-office police corruption.

There is plenty to enjoy here for Fred fans such as ourselves...and for non-Fred fans: what’s wrong with you? Become a Fred fan.