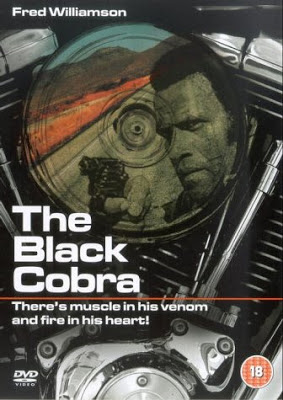 If you’ve watched the movie Cobra so many times you feel you can’t get any more out of it than you already have - and let’s face it, the movie is truly a modern-day classic and makes for highly addictive viewing, so it’s understandable viewers become repeat viewers - try Black Cobra, a movie that follows the outline of Cobra so closely, you just have to laugh. It’s almost as if writer Danilo Massi got a hold of a copy of the script to Cobra, and every time the name “Cobra” popped up, he crossed it out with a Sharpie and wrote “Malone” (which is Fred’s name in the movie, of course). And if you had ever wished that Cobra starred not Sly, but Fred Williamson, your prayers have been answered. God bless the Italians. They’re known for their “interpretations” of more famous and popular films, and they simply hired a man of African-American descent in the role of Marion Cobretti, gave it the title “Black Cobra” and dusted their hands and proclaimed they were done with work for the day. So shameless, yet so awesome. Thankfully, Black Cobra is an extremely entertaining film, with Fred at his absolute best. It just may be the most fantastic Fred flick: as an angry Cop On The Edge, he shoots criminal scum first and wears stylish sweaters later.

To be fair, this particular Black Cobra also wears a black coat and drives a black car, so maybe that’s what director Stelvio Massi (famed for his work in the Poliziotteschi genre) was referring to by adding the word “Black”. Nevertheless, the movie is well-shot and well-edited, and contains plenty of “Yes!” moments. The music by Paolo Rustichelli is great and has a very catchy main synth theme. And because Fred’s name in the movie is Malone, that makes this romp a cross between Cobra and Malone (1987)...right? 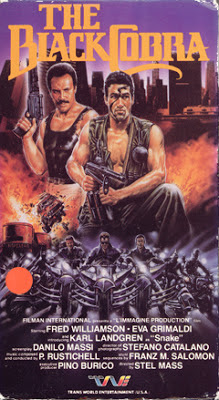 So if you can’t get enough of evil bikers in an abandoned warehouse, and scenes of women modeling (though surely due to budget constraints, it’s a non-robot modeling scene), and other scenes made famous by Sly and the gang, definitely give this movie a shot. But Cobretti never had a cat named Purvis, as Fred does in the movie, so there’s an important difference in the character of the two men. Seeing as how the cat received no official credit, it could be spelled “Purr-vis”, we’re just guessing. The existence of Black Cobra is just more evidence - as if any was needed - of the awesomeness of the original Cobra. Not only did it spill over into creations like the movie at hand, but even this is a three-part series! The main baddie in this movie is pretty reminiscent of Mario Van Peebles in Exterminator 2 (1984), so just do the math: 98% Cobra, 1% Malone, 1% Exterminator 2 + Italian production + Fred Williamson. What does it all equal? Once you’ve reduced the fractions, it’s MUST WATCH!

And if you’re confused as just exactly how to watch the Quality Special Products DVD (read: gas station quality), there’s a very helpful narrator on the menu screen that helps you out.  “Welcome to this interactive digital versatile disc! On this disc, you may select the feature film, the movie review, the scene selection menu, the interactive game quiz...press the enter button when you’ve made a selection. Thank you, and we hope you enjoy the feature presentation!” It tells us. And that’s just the main menu. He also helps out with further direction for the game quiz. What would we do without this helpful (and uncredited) man? Truly he predates Siri. He also worked overtime, because the DVD is a double feature with the William Shatner TV movie Incident on a Dark Street (1973), so you get double value for minimal money. It’s definitely a good deal, so should you be filling up your tank and you happen to pay inside, you’d be crazy not to pick up this disc.

Black Cobra is a triumph for Fred, as well as his fans. We recommend it.

Also check out a review by our buddy, Cool Awesome Movies!

Email ThisBlogThis!Share to TwitterShare to FacebookShare to Pinterest
Labels: 1987, 3 and a half stars, Black Cobra, Cop On The Edge, Fred Williamson, Fred-Fu

Got Black Cobra 1 and 3 on German VHS, 2 only the English tape.
One more time: I love Fred "The Hammer" Williamson-Movies.

I'm glad you reviewed this because I'd been sitting on it for a while. I got it as part of a five dollar three disc set called 'Urban Action Cinema' with copious amounts of classic black action films, including Black Cobra 1, 2 and 3! Suffice to say I've watched it now and you are absolutely correct. Classic stuff.

Harry: Nice! The Hammer rules. He usually delivers the goods.

Force Field: Sounds like a great action set. This is a classic. We loved the 1st and 3rd...couldn't get ahold of the 2nd one though. The BC3 review is dropping on Monday.

I have nominated you for a Film Q&A Tag, would love to read your answers if you're up for it!

I MUST watch this. Fred playing Sly?

Amateur Reviews: Thanks! Can give the answers on your site.

M. Brown: It is a blast, especially if you love Cobra.

great review. this was a fun Fred film. is this the one where the henchman in the end shootout stands on a massive pipe (or something) and knocks himself out? genius and hilarious...

Thanks! Totally agree, this was a lot of fun. Also this does have the scene you mentioned.