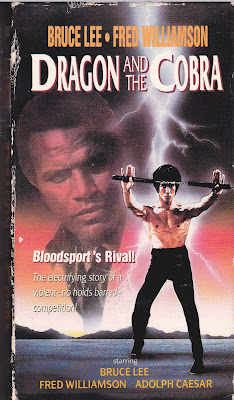 AKA: Fist Of Fear, Touch Of Death

A big fighting tournament is taking place at Madison Square Garden. Many fighters are showing off their various skills. Why is this going on, you ask? It’s because everyone is trying to find the “possible successor to Bruce Lee”. Not the actual successor, the POSSIBLE successor. The event is MC’d by a man with a name that has interesting historical connotations, Adolph Caesar. In the audience for no particular reason (though we’re happy he’s on board) is Fred Williamson. As the fights in the ring go on, we’re treated to a variety of clips from a myriad of different sources, trying to recreate the life of Bruce Lee, and people that knew him talking about him (and, not so subtly, talking TO him using horrendous editing). Is this film a crass cash-in exploiting the greatness of Bruce Lee and insulting his memory for a quick buck? Find out today!

This movie is a crass cash-in exploiting the greatness of Bruce Lee and insulting his memory for a quick buck. Hopefully this saves you some time. Now, this isn’t really a movie per se, as it’s not linear, and is cobbled together footage from a patchwork of sources, with a few new bits filmed to try to glue it all together. All the old footage, which appears to have been re-dubbed, is boring and painful to sit through. The newly-filmed footage isn’t without some merits, however flimsy...

There are some cool NYC locations of the day which we always love seeing, and we even see some movie marquees that are playing Apocalypse Now (1979), Animal House (1978) and 10 (1979). Fred Williamson brings his charisma but he’s obviously confused as to why he’s there so he’s on autopilot. But even The Hammer on autopilot is more entertaining than most actors. There seems to be an inexplicable running gag where people keep thinking he’s Harry Belafonte. Why this is, no one can say. A funky score also underlines these scenes. 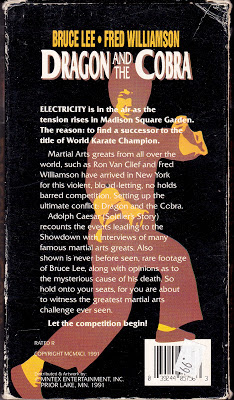 But women jogging in the park and being accosted by street toughs and then being saved by one of Bruce’s pretenders to the throne seems to be the sole bit of creative thought put into this trainwreck of a movie. Bill Louie plays “Kato #2”. That’s right, a guy dressed as Bruce’s character, with the name “Kato #2”. As mind-numbingly stupid as that is, Louie gets a pass because he was in one of our favorite movies, the awesome Death Promise (1977). So all is forgiven. In these “saving the joggers” scenes, Ron Van Clief actually shines as well. You gotta love that winning smile. But though this movie technically (by default) has Bruce Lee, Fred Williamson and Ron Van Clief, they’ve got some stiff competition in Fred the Flying Fat Man.

Ah, Fred the Flying Fat Man. He had such dreams. We’d love to be privy to his thoughts. How a morbidly obese vagrant with sleep apnea and diabetes could think he could genuinely become the new Bruce Lee is beyond comprehension. Yes, this is real. If anyone out there has any information on said Flying Fat Man, do leave a comment today.

But the big question here (especially when characters are talking to stills and spliced-together footage) is: WHO DID THEY THINK THEY WERE FOOLING? True Bruce fans aren’t going to accept this tripe. Casual moviegoers won’t care. So what was the audience here?

Naturally, the Fred Williamson stuff is the best here, and after suffering through the footage of Bruce’s “biography”, we were screaming for Adolph Caesar and his famous voice to come back and save us all.

So while there are a few decent moments in this plotless exercise, most of it is an endurance test that would test hardened bad movie lovers. If only they made an entirely new movie with Williamson, Van Clief and Louie, then we’d have something here. As it stands now, we really don’t.

Also check out a review by our buddy, The Video Vacuum!
Posted by Ty at 6.2.13

This is truly one of the worst Bruceploitation flicks ever made, which is quite a feat. Not even Fred could save it.

Great review! Freduary has been a blast so far.

You're welcome, buddy! Agreed, This was a tough sit.

Thanks! We are happy you're enjoying FredRuary.

This really does sound terrible, though the review was anything but.

I don't have a lot knowledge of Williamson, outside of his badass part in Vigilante. I need to track down some more of his stuff like that.

As so often is the case, the awfulness intrigues me. Especially the Flying Fat Man.

Thanks for the nice words about the review.

The movie is pretty bad, but there are some funny moments like the flying fat man. Fred is wasted...Black Cobra or Foxtrap are worth watching if you want to check out more Williamson.

Was it because of Fred "The Flying Fat Man"? Haha.

This is easily the worst film Williamson has ever appeared in, can't think of a single good thing to say about it.

Agreed. One of his worsts. Fred The Flying Fat Man was the only good thing about it.

That definitely would have helped! Haha.