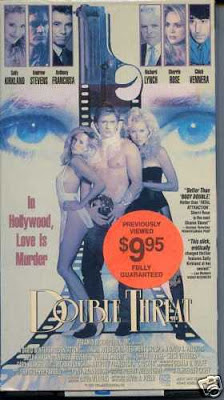 
Monica Martel (Kirkland) was once hot property in Hollywood, but now her career is on the downslide because, unfortunately, she is aging. But she’s working on a movie that should revive her fortunes. The producer, a man blessed with the name Crocker Scott (Franciosa) tells the director, Ross (Vennera) to spice up the film and make it “sexier”. The only problem is, Monica proudly proclaims she has never done nudity in her career and isn’t going to budge now. So the filmmakers call in a body double, Lisa Shane (Rose), and you’d think that would solve the problem. But that’s just the beginning, as Monica’s younger boy-toy Eric Cline (Stevens) lusts after the super-hot Lisa in a big way. But Monica is very controlling and Eric can’t really escape her clutches. But once a murder plot erupts, and cars start exploding and people start being shot at, Detective Fenich (Lynch) is on the case, and he’s highly suspicious of Eric and his motives. But does he have good reason? After many twists and turns, the fiendish plot is revealed. Just how many threats will there be? Find out today?

Andrew Stevens’ mullet and sleeveless denim shirt star in the movie, and when he puts on his Ray-Ban Wayfarer sunglasses, he becomes the ultimate coolguy. He seems to be some sort of cross between Patrick Swayze and David Hasselhoff, so it’s plain to see why he starred in so many of these “Sizzlers”. Connecticut’s own Sherrie Rose has never looked better. Maybe when she does roles that require Martial Arts, she feels the need to be less feminine. The linchpin of the movie is her sex appeal, so unfortunately no Martial Arts is on hand. But her car’s license plate is “MUVIES”. In the fictional world of Double Threat, was “MOVIES”, spelled properly, taken? Is her phone’s ringtone the song from the old Starz channel commercial (set to Beethoven’s 9th Symphony 4th Movement AKA Ode To Joy): “movies-movies-movies-movies-movies-movies-moooo-ooooovies”? She also wears a Seinfeld-style puffy shirt for a decent chunk of Double Threat’s running time. Ted Prior makes a brief appearance as “Thug #1”, a Van Halen-loving street tough who gets in a quick fight with Stevens. Even though there wasn’t really room for him after this one scene, the movie still could have used more Prior.

We always like to point out when there is a disco scene, and there is a good one here, with a generic C + C Music Factory knockoff for a song with a Freedom Williams soundalike commanding us to “Dance” over and over again. Yes, that is what we’re here to do, sir. Thank you. As for the tape itself, it looks quite good, with bright colors. It has no AIP trailers, but we suspect that is because it was released by West Side Studios Home Video, and it was not an entirely in-house AIP release. Regardless, it’s of good quality. But the important thing to know is that there is a longer unrated version. Should you want to add Double Threat to your collection, make sure you track down the unrated edition.

Same with Animal Instinct and Night Eyes. There are three of those too. Haha.