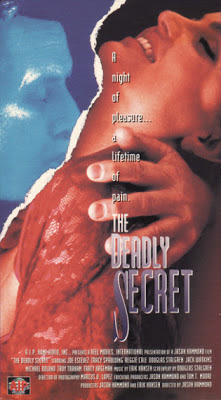 Apparently Joe Estevez plays the head of a brokerage firm and in his past lies a “deadly secret”. Various killings occur in order to secretively keep this deadly secret secretive. There’s a woman who gets naked a lot named Reyna Vaught (Spaulding). That’s it.

Oh me oh my. It pains us on at least two levels to have to tell you about The Deadly Secret. Firstly, it was painful to sit through, and we will explain why shortly. Secondly, we don’t enjoy giving bad reviews. We don’t want our readers to think we’re those typical internet guttersnipes who hate everything. Our readers know we don’t fit that description, and that we love celebrating great movies. However, that doesn’t mean bad movies don’t exist, and when they’re bad, it’s our duty, however painful, to tell the world.

Now that that preamble is out of the way, man is The Deadly Secret awful. It truly gives bad movies a bad name. This isn’t even fun bad, it’s just bad bad. If there’s one word that sums it all up, it’s INCOHERENT. But it’s also insufferable, inane, incompetent and inconceivably irritating.

The thing is, this is not a movie. Just because you have a camera and some lighting equipment, and you get some human beings to appear in front of these technical items, does not automatically mean you have a  finished film on your hands. The Deadly Secret fails to do even the most simplistic basics when it comes to filmmaking and storytelling, never mind entertaining.

This “movie” is just a jumble of footage: some headache-inducing, blurry “flashbacks”, followed by a guy sticking his hand in a dead fish (why?????), over and over again, then some sub-Skinemax soft porn, then some cutaways to the artwork on the walls of the room in which people are talking, then a party scene where people are imploring you to “Rhumba!” and it looks like they handed the camera to a drunk five-year-old. Then more footage showing us that Joe Estevez owns a scuba suit and a fishtank, then some statues, a few people get shot, then more Estevez sex. Yes, ESTEVEZ SEX. This movie contains all the Estevez sex you could possibly ever have hoped to not ever exist.

And it goes on like that for a patience-testing 90 minutes. This thing (like we said, not really a movie in the loosest definition of that word) literally dares you to turn it off the whole time you have it on. Because we run a movie review site, we felt we had to watch it all.

But in all honesty, this should be shown on a loop to Guantanamo Bay detainees. They’d spill all their secrets and terrorism would end forever. This hour-and-a-half long pain in the eyes is amazingly junky and quality-less, so it’s unfortunate and sad that AIP released it. We have to be the ultimate AIP site, which is why we watched it in the first place. We never could have imagined that that goal would involve sacrifice of any kind. Don’t watch this movie. Run and hide from it. It makes Laser Moon (1993) seem watchable by comparison.

You know something desperate is going on when there’s nudity during the opening credits. Speaking of which, we believe we’ve found one of our favorite things, a mistake in the credits. A man named Reggie Cale plays a character named Jake. Yet he’s credited as Roggie Cale. Yes, Roggie. ROGGIE! We hope his name is really Roggie, and Reggie is the typo. But we’re not sure. Another portent of The Deadly Secret’s sloppiness, it’s almost like the people behind the scenes weren’t taking anything seriously and this is all a big joke at our expense. Shockingly, it took TWO people to direct this unmitigated slop. Actually, you can really tell. Mismatched footage abounds. Godfrey Ho can make disparate footage work into an entertaining spectacle. Jason Hammond and Erik Hansen cannot.

The Deadly Secret is not only not a movie, it breaks the unspoken social contract between movie maker and movie viewer. It fails on every conceivable level, and the half-star rating is merely for the presence and performance of Joe Estevez. Avoid like the Ebola virus.

Oh man, now I want to see this just to see how bad it is. At the very least it can't be as awful as Dark Heaven, now there's a film with no redeeming qualities whatsoever, the worst part is it's incredibly boring, i'd rather watch a Ken Burns documentary then sit through that film again.

We never heard of Dark Heaven, but if you endure the horribleness of The Deadly Secret, and you make it back alive, report back, but don't pay too much....don't say we didn't warn you!