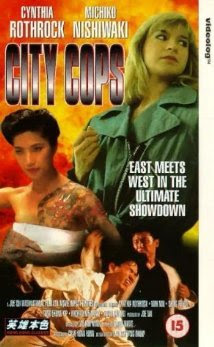 Cindy (Rothrock) is an American FBI agent who is currently in Hong Kong seeking arch-criminal Kent Tong (played by Ken Tong, just to make sure you’re paying attention). In order to bring down Tong and his criminal organization, she teams up with local HK cops David and Johnny (at least those were their names in the dubbed version we saw) and hilarity (?) ensues. Thankfully, many fights ensue as well. But in the spaces between these top-notch fights, a variety of comedic and/or romantic situations entangle the three main characters - mainly between Cindy and David, and Johnny and sister-to-baddie and police witness May (Kwan), who Johnny falls for during the course of the investigation. Naturally it all comes to a head in the final warehouse fight, where Cindy has to face her toughest opponent yet - the baddie-ess Michiko (Nishiwaki). Will our beloved City Cops make their ultimate arrests? Find out today!

While City Cops relies a just a bit too heavily on setting up and executing supposedly comedic scenarios and banter-filled dialogue scenes, luckily, the movie delivers the goods where and when it counts. There are some really cool, well-executed fight scenes, all done in that fast, kinetic, inventive late-80’s/early 90’s HK style we all know and love. The movie overall looks great, with top-notch cinematography and interior decor. May’s apartment is a standout, with a cat painting like you’ve never seen before. The dubbing is of the typical loud, brash style but that contains some humor of its own this time around.

As we noted earlier, the movie could have used a few more fight scenes, and/or a few more scenes with Cynthia Rothrock, but the ones we have are excellent and we choose to concentrate on the positives, which, thankfully in this case, outweigh some minor negatives. The cops have a killer beeper, and there’s yet more working out to synthy 80’s keyboards which have become synonymous with aerobics. Let’s not forget this came out in the great year of 1989, and the exercise craze was still huge. This when our city cops aren’t dealing with transvestites and “molesters”...all keeping us in suspense before the big blowout fights.

Despite a few actionless passages that seem to go on a bit long, City Cops redeems itself with some killer fight scenes nestled in with some of its other, more positive attributes. In the end it comes out a winner.

I was just lamenting the lack of decent Rothrock outside of Righting Wrongs et al, so I'm glad to hear about something else worth tracking down.