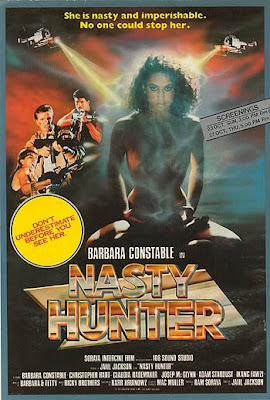 All hell breaks loose in Indonesia when an American anthropologist named Tania (Constable in her only credited movie role) travels there to uncover the legend of the South Sea Queen. It turns out the myths and legends of the area are true when Tania becomes possessed by the Queen’s malevolent spirit. Before you know it, she’s dressed in black leather, has an assault rifle with endless ammo and will go in any public space and begin shooting up the place. When she attacks an up and coming pop star named Erica (Rademaker in her only movie) while she’s performing live, a cop named Max (Hart in HIS only movie) comes to her rescue and they go on the run. Ignoring the fact that Tania cannot be killed, Max assembles a team of his finest warriors/buddies and they break out the tanks and missile launchers on her. Because her “spirit is too strong”, it’s going to take more than brute force to stop this particular reincarnation. But can she be stopped? Find out today!

Lady Terminator is a wildly entertaining and fun movie that you just can’t resist. It has plenty of exotic charm, thanks to its Indonesian locales and indigenous legends (and a cool 80’s look to go along with that), but since the movie was primarily made to be exported, it’s interesting to see the filmmakers give what they thought the rest of the world wanted - endless machine gun shooting with super-high body counts, nudity, and off-kilter weirdness a-plenty. Thankfully, this mixture of local culture and international aspirations resulted in a one-of-a-kind movie that must be seen. 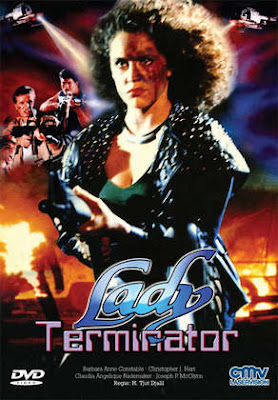 The movie doesn’t skimp on the action, and plenty of our favorite items are on show: screaming while shooting a machine gun (in this case in a tank!), an exploding helicopter, the disco scene (this one in particular is a winner because it mixes in some action to an extended version of Erica’s song), some awesome Aerobics clothing that Erica and her friend Marianne wear, and the icing on the cake is the killer acting/dubbing, featuring some memorable lines that deserve to be quoted (“Does this place serve beer or just milk?”, “I’ve seen more dead bodies than you’ve eaten hot dogs”, etc.). It’s easy to see why the producers PROUDLY present the movie, as it states in the opening credits. And in case you get confused, there’s a few sentences of voice-over narration at the beginning and end of the movie from an unknown, unseen voice. It will send you into a philosophical tailspin if you let it. 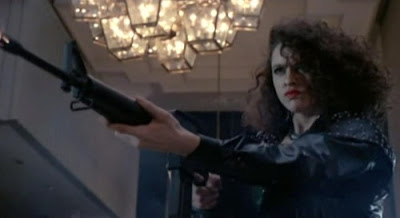 While Constable does a bang-up job as the Lady Terminator - and her pre-Terminator phase of innocence (her strange insistence on being known as an anthropologist even takes precedence over her gender) - truly the movie belongs to Snake. Who is Snake? He’s one of Max’s cop buddies on the force, and a more totally radical, awesome dude you have not seen. He wears only tight denim, has amazing hair, and talks like Michaelangelo from the Teenage Mutant Ninja Turtles. There’s a name in the credits, Adam Stardust, and we’re sincerely hoping that’s the guy that plays Snake, but we’re not sure. But who else could it be?

God bless Mondo Macabro for releasing this on DVD. Their support for this movie made it possible for the maximum amount of people to see it in its correct version, and we truly salute them for it. And there are some nice extras on the disc too. So if you don’t own it already, go on Amazon post-haste and add this gem to your collection!

Bar none one of the finest Indonesian films of all time.

Holy crap! I've always wanted to see this!! It looks right up my alley. Nice job guys! And thanks for the reminder. I gotta get my hands on this asap!

Thanks! You are sure to love it.