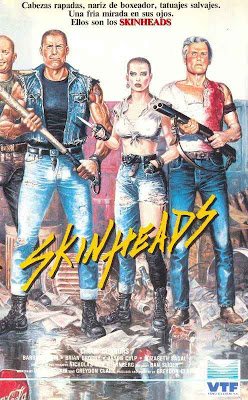 
A small group of skinheads led by Damon (Brophy) are apparently tired of harassing elderly store owners, so they take a skinhead vacation to the rural mountains. When further harassment of the locals such as restaurant owner Martha (Bain) leads to murder, a young couple who witness the incident, Amy (Sagal) and Jeff (Culp) go on the run in the woods trying to stay one step ahead of the skinheads and their underlings such as Brains (Ott). Luckily Amy and Jeff run across the cabin of Mr. Huston (Connors), a grizzled World War II veteran. Together they alternately fight and run away from the skinheads until the final confrontation. What will happen?

Unfortunately - very unfortunately - Skinheads is a huge disappointment. Rather than seizing this opportunity to say something incisive, unique, interesting or different about skinheads, instead here they are just generic baddies. They just as easily could have been bikers, crazed backwoods folk, a militia group of some kind, or a group of enemies with no affiliations whatsoever. Most of the movie consists of Amy and Jeff running away from the skinheads, and it gets very repetitive. Skinheads - the movie - has the wrong plot for its idea. By that we mean, you think it’s going to be an urban tale about the evil of neo-Nazis and those who stand against them. Instead, improbably, it’s a wilderness slog where characters come face to face with bears and sleep in sleeping bags on the forest floor. 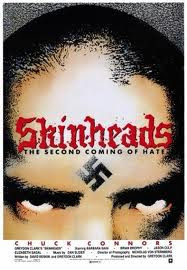 As the evil racist leader of the skinheads, Brian Brophy looks alarmingly like “Vinny” from Jersey Shore. (Don’t worry, we're ashamed we know what Vinny even looks like). His skinhead buddies have swastikas tattooed in the corner of their foreheads, and drive around in a white van with a huge swastika painted in black on the side of it, next to a circle-A “Anarchy” symbol. These anarchist-fascist youngsters have named this completely inconspicuous vehicle the “Death Van”, just as the Scooby Doo gang have named their van the Mystery Machine. They have also spray painted a swastika on their blinds at home, so you know they’re serious. They also have a poster of Hitler on their wall (where do you shop for one of those?) next to an S.O.D. poster, which truly shows the cluelessness of this production, as anyone who knows that band would know that placing them in this context is a complete absurdity, they are about as far from a skinhead band as it’s possible to get.

Interestingly enough, fellow on-screen skinheads Brian Brophy and Dennis Ott were both in the classic Road House (1989) - the same year as Skinheads. The great year of 1989 of course. The movie industry sure is funny, isn’t it? The main reason we rented this is because of the presence of fan favorite Chuck Connors, and while he’s decent in it, it’s not really one of Chuck’s best. The movie on the whole doesn’t SAY anything about the skinhead subculture, it doesn’t illuminate anything, or offer any solutions. But it does have a Motorhead-like song that plays often  with some crazy guitar solos.  Not that a low-budget exploitation movie directed by Greydon Clark has to be some sort of socially redeeming thing, but there’s seriously nothing here except mindless chases that wear on the viewer very quickly.

Far from the “Second Coming of Hate”, as the movie’s subtitle promises (unless it’s referring to how you’ll feel about the movie after watching it), Skinheads is dumb when it doesn’t have to be. A shame, really.

Also check out a write-up by our buddy Keith from The Unknown Movies!

The reason i bought this DVD in German was - Chuck Connors.
It's boring and lame.

Can't agree more. This was weak and lame with no action or even humor at all.

First i saw Chuck Connors in the TV-Shows "Branded" and "The Rifleman" and later in movies like "Day of Resurrection" or "Soylent green".

I thought this was OK, but as far as skinhead films go, you're better of with Best Of The Best 3. One Clark film I did really enjoy was Final Justice.

Best Of The Best 3 had some scary skinheads.