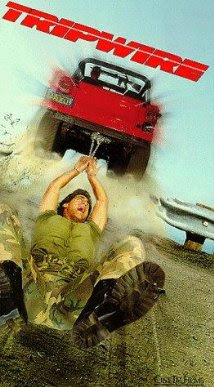 Jack DeForest (Knox) is a take-no-prisoners FBI agent who’s out to stop an international ring of terrorists led by the fanatic Szabo (Warner). Szabo’s goal is world domination by means of smuggling all kinds of dangerous arms. Helping him are his henchman Hans (Mortensen) and the beautiful Trudy (Lewis). Even street thugs like Turbo (Richardson) go up the ladder to Szabo, who has his fingers in all sorts of illegal activities.

Naturally, this doesn’t sit well with the tough, no-nonsense DeForest, whose rogue ways...well...cause him to go rogue in pursuit of justice. Captain Pitt (Kotto), of course, doesn’t approve of his “cowboy” tactics. But in a weirdly personal twist, while in pursuit of Szabo, DeForest kills his teenage son. So in revenge, Szabo kidnaps and brainwashes DeForest’s son and forces him, through constant druggings, to be a part of Szabo’s criminal network. So now DeForest must rescue his own flesh and blood, while attempting to “deforest” the terrorist network. Can he do it? 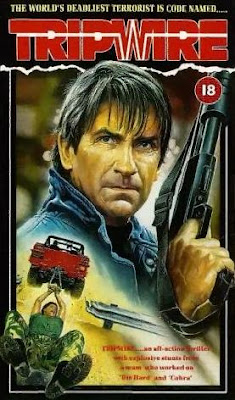 Tripwire is a minor undiscovered gem in the world of video-store action. It starts with a bang, an extremely impressive chase sequence. After this wheelie-poppin’ intro, the stunts and parade of familiar names in the cast keep things afloat. Truth be told, it does sort of run out of steam in a couple of places, but on the whole, Tripwire is a strong entry in the “I’ve never heard of it” action sweepstakes. Another thing that helps the movie is some of the more off-kilter directorial touches, thanks to James Lemmo, a man known for his associations with Abel Ferrara and William Lustig. For example, for the first seven minutes of the movie, there is no dialogue. There are some unusual camera moves as well later on, and the performance of Yaphet Kotto is oddly naturalistic. 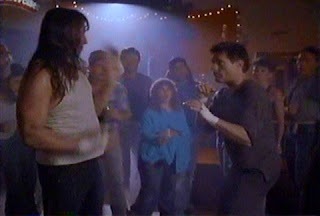 The movie continues to hit all the right notes, as exemplified when DeForest is kicked off the force, and becomes a down and out...wait for it...PUNCHFIGHTER! We always appreciate some unexpected Punchfighting. Knox plays an impressive hero, and gets in some good dialogue. Rounding out the impressive cast are cameos by Meg Foster and none other than Tommy Chong. Of course, DeForest has a young punk son who cranks up his 80’s metal on his boombox and has Frank Zappa posters on his wall. But all of that aside, if you were in a video store in the golden year of 1989 and saw Tripwire’s box art, how could you NOT rent it? It’s impressive - and also similar to the Lemmo/Lustig vehicle Hit List (1989). Something about dudes being dragged from cars must really fire them up. Well, color us impressed.

Tripwire is another example of why the 80’s were so fertile and rich with entertaining action. It’s only now that we’re sorting it all out and enjoying everything from that time period. And despite a few minor missteps, it’s finally time that Tripwire had its moment in the sun.

Got the tape. A few weeks ago i watched it again.

I just bought an old vhs tape of this - your review was (again) spot on. Really good little action film, shame it's so forgotten. Or can it be called forgotten if it wasn't never known at all?

Btw, I really love your reviews and check this site out regularly. Keep shining light on unknown action gems like Tripwire!

Can't agree more! This is a hidden gem. Thanks for the kind words, we really appreciate it. We will keep shining a light on underrated action.

So is this very ''Die Hard'' inspired would you say despite coming out a year later after the 1988 original?

Thanks for your quick response; I couldn't tell despite rereading this review twice. I'll shop for both of those at Amazon soon.

Tripwire is worth a purchase for the box art and car chase alone.

are you saying needed more Viggo, if so, we agree!