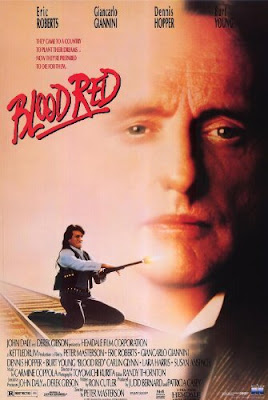 
Sebastian Callogero (Giannini), the patriarch of the Callogero clan, has brought his family to Brandon, California in search of a better life. They, along with other Sicilian, Italian, and other immigrants work hard to produce wine in that part of the country. But seeing as it’s 1895, railroads are being built all across the country, and it just so happens that the land the Callogero’s use is blocking the way for W.B. Berrigan (Hopper) and his dream to plow his railroad right through their precious wine country.  Sebastian won’t budge, so the ruthless Berrigan calls in Andrews (Young) and his goons, to use force and intimidation to get them to relent. After some more escalations in unpleasant events, it’s up to Sebastian’s son Marco (Roberts), who formerly was rebellious against his father, to rise up and fight back against Berrigan and Andrews’ reign of terror to save his land and protect his father’s good name.  Helping him is Enzio (Madsen), among other compatriots. Will they get their revenge?

Blood Red is a decent movie, nothing great. It feels like a TV movie a lot of the time, and judging by the killer cast,  it should have been a more exciting and worthy outing. Its slow-paced, old-fashioned style might appeal to fans of classic Westerns. Not that any of this is offensively bad in any way, it’s all just a bit bland. A few blow-ups and maybe a bit of gun-shootin’ doesn’t really help much.

Eric Roberts continually has a smug look on his face and is consistently shirtless throughout the movie (we’re assuming just suspenders doesn’t count as a shirt). Also we didn’t know mullets existed in the 19th century. You learn something new every day. And despite the fact that this is likely to be the only Julia Roberts movie on this site, as well as Burt Young ALMOST rescuing the movie, truly the star of the show is Dennis Hopper as Berrigan, the classic Carpet Bagger/Robber Baron/Captain Of Industry (or what-have-you) of the day. When he first appears on screen, your first impulse will be to say “Is that Willy Wonka?” - but once you  get past his fancy suit and top hat, there’s the Irish accent. Yeah. 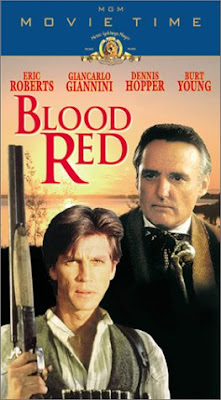 Interestingly, if you watch the AMC show Hell On Wheels, you may have some idea of what Blood Red is about - immigrants and the birth of the American Railroad, with all the conflicts that ensue. Blood Red may have paved the way for it, but Hell On Wheels is done much better. If you’re interested in that subject matter, check out that show instead. Blood Red is just an immigrant-based variant of your classic “Get Off My Land” movie. Party A tells Party B to get off their land. Party B refuses to get off said land. Conflict ensues. The stereotype is that “GOML” would traditionally be said by a man with a Southern accent holding a shotgun. Here at least it’s some different ethnic groups.

Blood Red appears to be an oddity in the careers of most of the people involved. It might be worth checking out just to see them all interacting in a low-budget Western setting, but on the whole, Blood Red seems a bit lackluster.

Haha, we are in definite agreement...you forget the movie the second you start rewinding the tape.

2 stars is being generous, for me this was a total snoozefest, definitely one of Robert's(both Julia and Eric) weakest films.

Definitely agree. This could have been a lot better. Hopper was decent though.

Yeah, I can see why it was forgettable for many. Nostalgia aside, it did have an unusual story and mixture of crime and western elements yet near the end it feels like during the final shootout that they exceeded what little budget they had left and just tried to simply end it.

This should've been better. It was waste of everybody's talent. Hopper's accent was funny though.