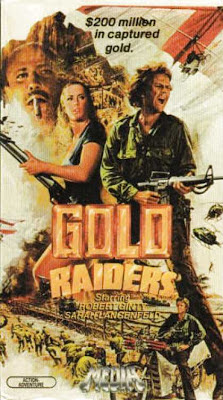 
When a plane goes down in the middle of the jungles of Thailand carrying millions of dollars in gold, a ragtag group led by Mark (The Gint) faces adventure and much peril as they try to retrieve it. Helping him along the way is Cordelia (Langenfeld). However, making their journey even harder is the evil, cigar-chomping commie General (is there any other kind?), named (we think) Korn (???), and he’s sending his men after the gold. Who will raid the gold: the good guys or the commies? find out today!

Gold Raiders is a fun movie that’s more on the adventure side of things than straight action. The sense of fun at work here is due in large part to the dubbing, which is laugh-out-loud funny. There are wacky fights, a surprisingly high body count, and some of the necessary inventiveness that comes from “third-world”-style filmmaking. Filmmaker P. Chalong probably didn’t have a lot of resources at his disposal - but that didn’t stop him from creating a pre-Cyclone (1987) futuristic bicycle that’s also a hang-glider and shoots missiles! Both that and the sinister cave bats with the red glowing eyes are some of the details that make Gold Raiders stand out.

Of course, it has the always-likable Ginty leading the pack. Although we don’t quite know whose voice it really was. It seems he saw a chance to go to Thailand and nabbed it. Perhaps he figured no one would ever see this movie - not that there’s anything to be ashamed of here - but, amazingly enough, the great VHS label Media released it in the U.S. In the 80’s, Ginty was riding high on the success of the Exterminator films, and Gold Raiders promotional materials made sure everyone knew this.

While the plot is pretty flimsy (you gotta love the evil General screaming about “capitalist imperialists!!!”) - no one should get really hung up on the plot as long as the charmingly homemade-by-necessity effects are on display, including the nifty blood effects. Add to that some picturesque Bangkok locations, and you have a night of silly entertainment at its best. But there’s a caveat... 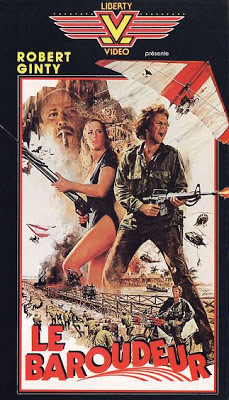 In its quest to seemingly recreate the work of Sergio Leone, Gold Raiders is just too long. Leone can justify creating a longer film. Chalong isn’t quite up to his masterful skill level. The running time is absurdly almost two hours. The climax is really cool...but then it keeps going and going.

If all the fat was cut from this movie and the climax was in the right place, Gold Raiders might be more well known and put in the pantheon of “watch it with your buddies” movies. You can still - and should - do that, of course, but be aware you’ll be there for longer than you’d expect.

Besides the lengthiness, Gold Raiders is a movie we think most people will like - especially if you don’t take it too seriously.

Sounds like we know where Firewalker got all of its ideas.

Got the German VHS called Mission Firegame. Aside the Gintys Mission Cobra and Codename Hellfire.

Codename Hellfire is a killer title!

This is a Ginty classic. Not that many Thai movies have had worldwide distribution. Another hang-gliding motorbike could be seen in the second Captain America movie. Was Reb Brown Ginty's inspiration?

Happy you enjoy it too! Gotta love Ginty...Totally agree about Reb Brown...if only they made a buddy cop movie together!