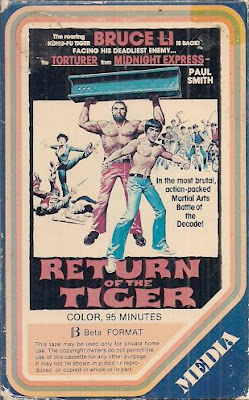 
In Bangkok, an American crime lord, Paul (Smith) is making his play to become the number one heroin dealer in the region. His main competitor is a Chinese gang who also wants control of the drug trade. But our hero, Chang (Li), is slyly playing them against each other so they can slowly wipe each other out. Inevitably, Paul and Chang will have to battle it out in the final confrontation. See who is victorious tonight!

From the opening of the movie, when Angela Mao shows up in a gym wearing a denim jumpsuit and stylishly beats up all comers, you know you’re in for an above-average chop socky outing. This is a true drive-in-style Martial Arts film, where characters have great outfits with huge collars, the dubbing is funny in its own right, there’s quality, non-stop fighting that is well-choreographed, and there are some nice directorial flourishes along the way that keep things from ever getting too flat.

Adding a lot to the proceedings is the extra-funky music, which includes some seriously badass drums. It’s easy to see why rappers like Wu-Tang like this style of movie, especially after hearing this cool soundtrack. Bruce Li even wears an imitation Adidas tracksuit for a bunch of his fight scenes, showing that the filmmakers trying to wring every last drop out of the Bruce Lee legend created something special that can stand on its own - and since a lot of these movies played on New York City’s 42nd Street, they ended up inadvertently inspiring some of the street culture of the 70’s and 80’s. 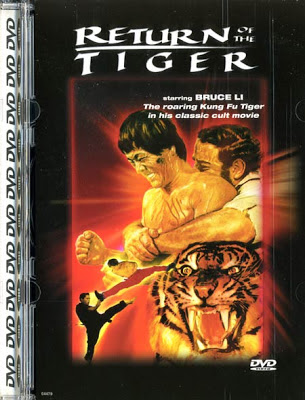 We always felt Bruce Li was underrated. While he came to prominence in the rush of Bruce Lee imitators along with Bruce Le, Dragon Lee, and our personal favorite knockoff name, Bruce Rhee, Bruce Li can hold his own as a high-quality Martial Artist, and this movie puts his talents on display - not only does Return Of The Tiger have the most threadbare plot to allow for non-stop brawls and fights, but there’s a hilarious scene where Li, right before a fight, oils himself up with oil that he just happened to have in his own pocket!

So there’s a sense of humor here too, which is nice. Paul Smith, whose career has plenty of interesting moments, including appearing in the David Heavener vehicle Outlaw Force (1988), makes a visually different villain for this type of film. His bearded, hulking appearance gives Li a big challenge to overcome, and the climax - just like this movie overall - doesn’t disappoint. 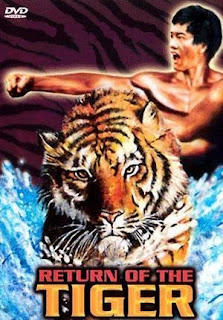 Naturally, it takes place in the time-honored abandoned warehouse. Other things to watch out for are the musical stings (presumably) lifted right from the John Barry James Bond theme music, and an obese minion of the baddies named Tom who always wears a sweatshirt with the word “TOM” written in huge letters right on it. There are other memorable moments as well, making Return of the Tiger a cut above the legion of similar films being released at this time.

Also known in some territories under the awesomely overblown title of “Silent Killer From Eternity” (!), Media released this on VHS back in the good old days, so check it out if you can find it.

Bruce Li is better than Dragon Lee, who just looks CREEPY and like he had plastic surgery to look more like Bruce himself, but he's still a pretty weak hero overall. He had a couple of good ones though, I remember liking this one.

There was another I remember liking, I think it was Dynamo? Dynamite? I'd have to go through my DVDs at home to find the title. It has been a WHILE.

Let's not forget about Paul L. Smith, a large bearded man who throws Bruce around like dough. His presence makes the movie a lot more fun.

listen up! being this is my favorite Ho Chung Tao film with the baddest soundtrack, can anyone tell me who is singing them songs??? cant find em nowhere! the covers of "ninetynine and a half" and "nowhere to run" are far out! ...btw, ho chung tao is bruce li real name..when will quentin tarantino pull him out of hiding!

Love your enthusiasm! Wish we knew the artists singing the songs. Bruce Li was great in this. He should make a new movie soon.

This was a cool movie. The final fight was great. I agree that Bruce Li was much more than a Bruce Lee clone. Thanks for the recommendation.

You're welcome! This movie rocked.